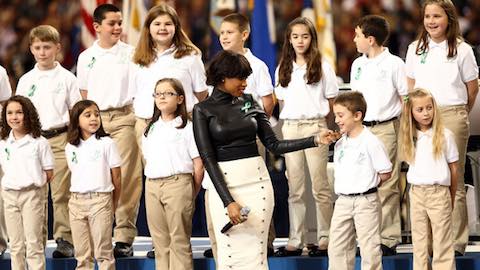 To officially open the Super Bowl, Jennifer Hudson and the Sandy Hook Elementary Chorus graced the stage to sing a heartwarming version of 'America the Beautiful,' which moved members of the crowd into tears.

Before their performance, Hudson tweeted, "Such a privilege to be performing with the Sandy Hook elementary chorus at the #SuperBowl today. We go on just before kick off!"

Afterwards, she posted a photo-collage of her Super Bowl experience saying, "Such an amazing time! I am grateful !!! God bless America."

The Sandy Hook Elementary School Chorus has raked in positive comments as well.

The chorus donned green ribbons as homage to the victims of the December 14 shooting incident at a school in Newtown, Connecticut, where 20 children and six adults died. 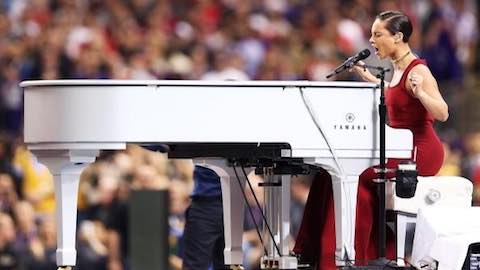 Meanwhile, wearing an elegant red gown, Alicia Keys performed at the Super Bowl with her all-new rendition of 'The Star-Spangled Banner,' which she sang live with her own piano accompaniment. Contrary to past national anthem boo-boos, Keys did not miss a line and definitely did not lip-sync.

Prior to her performance, Keys tweeted about her performance saying, "2morrow's the big day! The energy is so amazing! u can feel it all over! I feel excited in a way I'm not sure I ever have! :-) can't wait!!"

After her performance, Keys posted various photos of her before the show. One photo of her waiting for her turn to take the stage captioned, "One of the most watched games all year & I was on millions of TVs... I was definitely feeling those butterflyz!" Another photo showed her walking to the performance area captioned, "This was when I was about to go on stage! The crowd's energy was CONTAGIOUS! #SB47"

She followed it up with a solo photo of her with the Super Bowl crowd in the background. It was captioned, "I was speechless in this pic! Blessed to be here in Louisiana showing love for the USA."

Keys, who sent her love to her fans shortly after, also regarded her stint at the Super Bowl 'unforgettable' and 'crazy.'