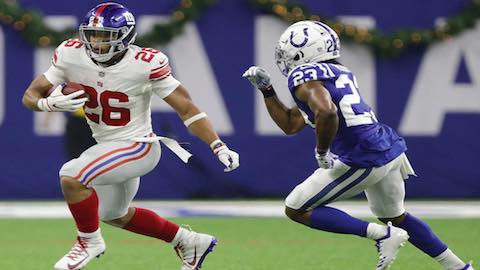 Saquon Barkley was recognized online at nfl.com/rookies and this morning during Pepsi's Rookie Brunch Party in Atlanta, which featured a trophy presentation by ESPN's Sam Ponder, a DJ set by Grammy-winner Lil Jon (who is also featured in Pepsi's Super Bowl LIII commercial), and a performance by Pepsi's Sound Drop artist Bryce Vine.

The No. 2 selection in the 2018 NFL Draft, Barkley led the NFL with 2,028 scrimmage yards joining Pro Football Hall of Famer Eric Dickerson (2,212 scrimmage yards in 1983) and Edgerrin James (2,139 in 1999) as the only rookies with at least 2,000 scrimmage yards in NFL history. A 2019 Pro Bowl selection, Barkley recorded 91 receptions in 2018, including a single-game franchise-record 14 catches in Week 2, tied for the most by a rookie running back in league annals. Barkley became the first Giants rookie to rush for at least 1,000 yards (1,307) and his 15 scrimmage touchdowns were the most by a rookie in team history.

Barkley was one of five finalists nominated for this honor.

The five finalists were selected for their outstanding performances through the 2018 NFL season. Each week, five nominees were chosen for the Pepsi NFL Rookie of the Week and fans voted for the winner on NFL.com. Those results were used to help determine the finalists.