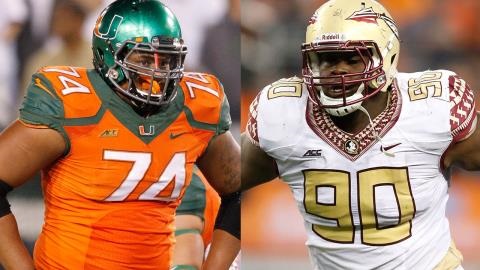 Under the radar players to keep an eye on as the 2015 NFL Draft approaches.

A two-year starter at Florida State, Eddie Goldman finished his college career with 62 tackles, 12 tackles for loss, and six sacks in 36 games, including 27 starts.

Ereck Flowers is quite probably the best run blocking tackle in the 2015 NFL draft. This University of Miami player is aggressive, strong, and massive weighing in at 329 pounds and 6'6" tall. NFL teams looking to get a strong run game and solidify the right side side of their offensive line are very interested in Flowers. He'll need to develop into a better pass protector.

Forget that he's only 5-foot-10, 185 pounds. All Locket did at Kansas State was make plays, both as a receiver and as a return man. He's a quick-twitch athlete who makes precise cuts and can generate separation in a split second. He's elusive and explosive in the open field, and he was occasionally Kansas State's entire offense, catching 106 passes last year. He also finished his career with four return touchdowns. Draft him, and he'll find a way to get open and make defenders miss.

Being relatively short (6-foot-1) shouldn't prevent the Clemson standout from being embraced by the NFL. Jarrett is an disruptive player on the interior who played a huge role for the best defensive front in college football, even if he didn't earn the national praise of teammate Vic Beasley. Jarrett isn't the quite the sleeper that others on this list are -- he'll likely be a second-round pick -- but he has the talent and instant-impact ability to be a first-rounder.