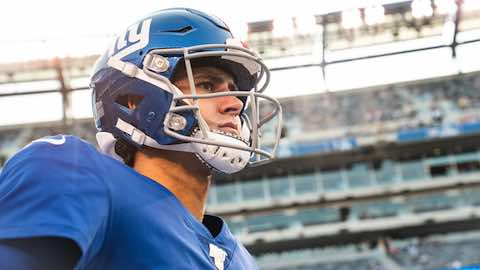 NFL quarterbacks are getting younger and more efficient, undefeated teams abound -- including three teams that missed the 2018 playoffs, and a pair of AFC powers that meet Sunday -- and games are close and competitive.

Those are just some of the NFL storylines as the league steams toward Week 3.

Through two weeks, the NFL's 100th season is its best in terms of passing efficiency. In fact, the five most efficient marks in NFL history have occurred this decade.

Young QBs Get the Nod

For a third consecutive week, a rookie quarterback is expected to make his first NFL start when the New York Giants' Daniel Jones, the sixth overall selection in the 2019 draft, takes the field at Tampa Bay (4:05 PM ET, FOX).

Jones is in for a tough outing against the Buccaneers

ESPN's Stephen A. Smith, Max Kellerman and Damien Woody predict how rookie QB Daniel Jones will fare in his first-career start against the Tampa Bay Buccaneers in Week 3.

This week, at least 18 quarterbacks age 26 or younger are expected to start. That hasn't happened in 32 years, since the third week of the 1987 season (also 18). And if a 19th quarterback starts at age 26 or younger, that would be a first in the 100 seasons of the NFL.

Chiefs quarterback Patrick Mahomes had a September 17 birthday. The NFL's youngest Most Valuable Player since Pro Football Hall of Famer DAN MARINO in 1984, Mahomes has shattered Dan Marino's NFL record with 326.4 passing yards per game before his 24th birthday.

And, despite starting just one game during his rookie season in 2017, Patrick Mahomes ranks fourth in NFL history with 57 touchdown passes prior to turning 24.

Teams on the Rebound

Three NFL teams that missed the playoffs last year (the Buffalo Bills, Green Bay Packers and San Francisco 49ers) have an opportunity to begin the season 3-0.

The last time at least three teams rebounded from missing the playoffs to begin a season 3-0 was 2013 (Chicago, Kansas City, Miami and New Orleans).

San Francisco, with a win on Sunday vs. Pittsburgh, would be off to its best start in 21 years. Several teams can also achieve their best starts in a significant amount of time.

Meanwhile, the Los Angeles Rams and Kansas City Chiefs can each start 3-0 for a second consecutive season. The last time the same two NFL teams opened 3-0 in back-to-back years was 2015-16 (Denver and New England).

This week, the NFL has a chance to tie a single-season record with eight teams having the ability to begin a season 3-0. The only year in the history of the NFL that at least eight teams were 3-0 through three weeks was 1998 (eight). The last time seven teams started 3-0 was 2015.

No NFL division has seen multiple teams start 3-0 since 2015, in the NFC South (Atlanta and Carolina). This week, it can happen in both the AFC East and the NFC West.

Speaking of the NFC West, the division actually has three teams that could be 3-0 a week from now. That hasn't happened in an NFL division since 2002, the first year of the 32-team NFL and the current eight-division alignment. That year, AFC West teams Denver, Oakland and the San Diego Chargers each started 3-0.

Showdown of the Week

In the Super Bowl era, only two quarterbacks over the first two games of a season have started with at least seven TD passes, no interceptions and a completion percentage of 70 or higher. Those two players, Lamar Jackson and Patrick Mahomes, meet on Sunday (BALTIMORE at KANSAS CITY, 1:00 PM ET, CBS).

This Week in NFL History

Eighteen years ago, after losing veteran starter Drew Bledsoe to injury, the 0-2 New England Patriots faced a difficult road trip at Indianapolis, which was 2-0 to start that season. Enter a sixth-round selection from the year prior, Tom Brady, and the youngster in his first NFL start led the Patriots to a 44-13 upset on the road. New England would win its first Super Bowl championship.

Comebacks Back in Style

The season's first two weeks have proven that insurance points are important. Fans, coaches and players, if your team is down, help yourself to a slice of hope.

In 32 games to date, 11 games have featured a team coming from behind in the second half to win, including seven teams that trailed at halftime. Six of those games have seen a team win after erasing a fourth-quarter deficit.

The Seattle Seahawks have overcome a second-half deficit in each of their first two victories. And those numbers don't include the exciting Week 1 comebacks by the Indianapolis Colts and Arizona Cardinals, who sent their respective games to overtime.

Eight games have had teams come back to win or tie after trailing in the fourth quarter.

Three NFL teams can reach milestone victories in their franchise histories this week.

Both the Denver Broncos and The Minnesota Vikings can record their 500th wins, including postseason.

Among the original eight franchises that launched the American Football League in 1960, Denver would become the second team to reach 500 wins, as only the New England Patriots (539) have won over 500 games.

The Carolina Panthers, who began in 1995, bid for the 200th win in franchise history, including postseason.

With a point-differential of at least 24 points this week, their season-opening point-differential would reach comparisons to teams as old as the NFL itself. Defensively speaking, should the Patriots allow nine or fewer points, they'd also establish the fewest points allowed over a season's initial three games in the Super Bowl era.

Cleveland Browns quarterback BAKER MAYFIELD needs a touchdown pass on Sunday Night Football against the Los Angeles Rams (8:20 PM ET, NBC) to reach historic company. He enters the week having thrown for a touchdown in each of his first 15 NFL starts, tied with BRAD JOHNSON for the second-longest streak to begin a career (since at least 1950). Only Pro Football Hall of Famer KURT WARNER authored a longer career-opening streak, throwing for a touchdown in his first 23 NFL starts.

Florio & Simms do their weekly picks in a joint PFTPM/Unbuttoned collaboration. Should the Chiefs be 6-point favorites over the Ravens? Will the Patriots and Cowboys cover their monster spreads? And can the Browns take down the NFC Champs in primetime?