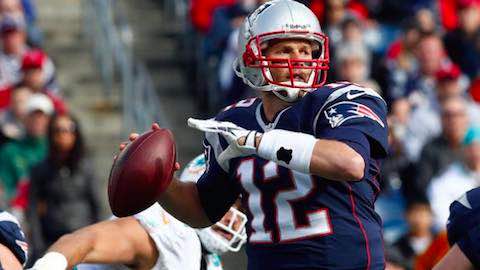 A 14-time Pro Bowl selection and three-time NFL Most Valuable Player, New England quarterback Tom Brady has led the Patriots to six Super Bowl titles and 16 division championships, both the most by a starting quarterback in league history, including 10 consecutive AFC East titles -- the longest streak of division titles in NFL history.

Tom Brady's 237 all-time wins as a starting quarterback (including playoffs) are the most in NFL history ahead of Peyton Manning (200) and Brett Favre (199).

In 2018, Brady continued to leave his mark in the record books, becoming one of four quarterbacks in NFL history with at least 500 touchdown passes, joining PEYTON MANNING (539), DREW BREES (520) and Pro Football Hall of Famer BRETT FAVRE (508). Additionally, he joined Brees, Manning and Favre as the only quarterbacks with at least 70,000 career passing yards.