How Gambling Built Baseball and Then Almost Destroyed It 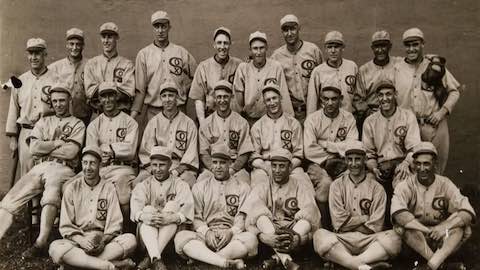 Up until the 1919 Black Sox Scandal, gambling and baseball had a marriage of convenience. A century later, gambling is again being seen as a solution to the sport's woes.

What became known as the "Black Sox Scandal" rocked professional baseball. But it wasn't an aberration in a sport that was otherwise clean.

Baseball became America's national pastime because of -- and not in spite of -- gambling.

In his book "Baseball in the Garden of Eden ," historian John Thorn explains how gambling was far from an "impediment to the game's flowering"; instead, it was "the vital fertilizer."

In baseball's infancy, the sport was thought of as a boy's game. But over the course of the 19th century, gambling deepened adult interest and investment in the sport, attracting cohorts of older fans.

Gambling's popularity was helped along by the spread of statistics, that particular lifeblood of baseball that still keeps fans hooked today. Developed initially to allow the results of a game to be printed onto the page in the form of box scores, statistics also created a pool of data that gamblers could use to inform their bets -- many of which were made from the stands, in the middle of games.

In his history of Fenway Park, Glenn Stout describes how, in the ballpark's early years, "the best seats were quickly taken over by a rabid contingent of gamblers who bet on absolute everything imaginable, ranging from the eventual winner … to ball and strike calls" and "even such arcane issues as whether the wind would change direction." Fans waving dollar bills and barking out bets resembled "brokers on the floor of the stock exchange."

This kind of gambling was so common in the stands that Ernest Lawrence Thayer's iconic 1888 poem, "Casey at the Bat," captured such a moment in one of its stanzas:

"A straggling few got up to go in deep despair.

The rest clung to that hope which springs eternal in the human breast;

They thought, "If only Casey could but get a whack at that --

We'd put up even money now with Casey at the bat."

Some players also sought to get in on the action.

In 1919, the highest-paid player was Detroit Tigers outfielder Ty Cobb, who earned US$20,000 -- which equates to roughly $300,000 today, or less than Major League Baseball's current minimum salary.

Most of Cobb's peers earned far less than the future Hall of Famer. Working with gamblers was an attractive way to supplement their incomes -- and many of them did.

One of the most notorious was first baseman Hal Chase. Dubbed the "Black Prince of Baseball" by baseball historians Donald Dewey and Nicholas Acocella, Chase made a veritable career out of throwing games. Playing mostly with the New York Highlanders, Chase, as Charles Fountain noted, "threw games for money, he threw games for spite, he threw games as a favor for friends, he threw games apparently for no reason at all other than to stay in practice."

But this wasn't the kind of gambling that brought baseball to the brink of disaster in 1919. That scandal saw the players themselves -- working in tandem with professional gamblers and gangsters -- fix the World Series.

The 1919 World Series was the best-attended Series at that point in the game's history, but the play of the White Sox turned the games into elaborate theatrical performances.

Those in on it had to play to lose, and the statistics are telling.

While the players tried to pull off authentic performances for fans, they weren't always successful. Felsch was chided by his fellow cheaters for his blunders in center, which they deemed too obvious.

Fundamentally, however, the games lacked the core drama and appeal of sports: the uncertainty of the outcome.

Sportswriters took notice. Rumors were already flying in the press box before the World Series' conclusion that something was wrong. Sports journalist Hugh Fullerton had heard these rumors when he arrived to cover the series, though he tried to convince himself -- and his readers -- that the story couldn't be true. Still, once the series ended, Fullerton wrote worriedly in the Chicago Herald and Examiner that "Yesterday's, in all probability, is the last game that will be played in any World Series."

Fullerton kept pursuing the story and became the first sportswriter to break the details to the public in December 1919, with an article in the New York World entitled, "Is Big League Baseball Being Run for Gamblers, with Players In on the Deal?"

As more details emerged, the scandal overwhelmed the sport and threatened to destroy it. If the World Series itself, baseball's premier event, could not be trusted, how would the sport survive?

The new baseball commissioner, Kenesaw Mountain Landis, acted decisively and independently of the courts. Even after the players were acquitted in a trial that ended on Aug. 2, 1921, Landis -- a former federal judge -- had already made his decision.

The stunned White Sox players -- including stars like "Shoeless" Joe Jackson, who had hit .375 in the series but was nonetheless aware of what his teammates were up to -- were banned from baseball for life.

Rose had admitted to gambling on his own games, even as a manager. Some thought Giamatti overreacted, given that Rose never bet against his own team.

That argument, as historian Bruce Kuklick wrote in a 1999 essay, doesn't hold up. Rose, he points out, didn't bet on every game. It's not inconceivable, then, that he would make decisions during games in which he didn't place bets -- say, not bringing in his best relief pitcher -- to make sure that reliever would be available for the games he did bet on.

Giamatti surely had 1919 on his mind when he meted out Rose's punishment. With the game having barely escaped death once, Giamatti knew that organized baseball couldn't risk skating too close to that edge again.

And yet in August of this year, Major League Baseball made FanDuel -- a daily fantasy sports gambling service -- its official gambling partner.

It may be that baseball hopes that gambling will bring more adults back to the sport, just as it did in its early days. After all, attendance at games is down. Football, meanwhile, has become the most watched sport on television in the U.S. Six million viewers even tuned in for the 2019 NFL Draft.

Gambling may fuel more interest in the sport. But throwing on more fuel can result in a fire that burns out of control. In 1919, baseball came close to burning its own house down. One hundred years later, journalist Hugh Fullerton would surely be stunned to know that big league baseball has once again made a contract with gamblers, in full view of both players and fans.

Let's hope the story doesn't end in scandal this time around.

Baseball: How Gambling Built Major League Baseball and Then Almost Destroyed It