Ichiro Suzuki by the Numbers 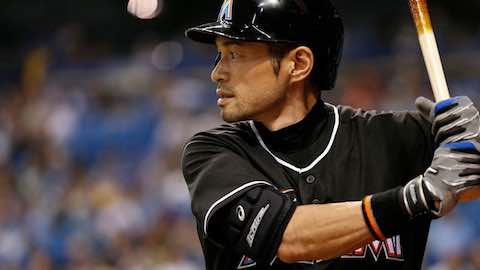 With future Hall of Famer Ichiro Suzuki surpassing 3,000 MLB career hits, the World's hit king has no plans of slowing down.

If Ichiro Suzuki sticks to that plan, he could very well break Pete Rose's MLB record of 4,256 hits. But if our days of admiring Ichiro at his craft are winding down, he's given us one heck of a career to look back on.

Ichiro Suzuki - The International Hit King by the Numbers

After arriving in the U.S. in 2001 at age 27, Ichiro wasted no time establishing himself among the game's elite. Ichiro Suzuki posted a .350/.381/.457 slash line with 242 hits to win American League Rookie of the Year and MVP honors, while leading the Seattle Mariners to a record-tying 116 wins. Three years later, he made history by setting the single-season record with 262 hits. The 2001 and 2004 seasons are the two most productive years of his career, based on Wins Above Replacement.

From a hitting perspective, the most incredible thing about Ichiro's career wasn't the tremendous peaks -- although there were plenty -- but his consistency. He was a hitter you could set your watch to, as he became the first player ever to post 10 consecutive seasons with 200 hits or more. During that span, Ichiro Suzuki played an average of 158.8 games per year, making the All-Star team each time.

Though he became the 3,000 Hit Club's 30th member, Ichiro's approach is unique. Ever the free-swinger, he currently has the second-fewest career walks (619) among the group, behind only Nap Lajoie (516).

Ichiro's philosophy in the batter's box is aggressive, but it is a controlled aggression. In 2007, he claimed he could hit 40 home runs if he wanted to, but he'd also post a .220 batting average, and "nobody wants that." Instead, what we saw was arguably the game's greatest slap hitter of all time. A whopping 81.8 percent of his hits have been singles, and his career slugging percentage of .405 is the lowest among any of the 3,000 Hit Club members.

Clearly, Ichiro did not come to the plate with the intention of demolishing the ball. With the precision of a surgeon, he instead used the advice of Hall of Famer Willie Keeler (who retired with 2,932 career hits) and simply "hit 'em where they ain't."

On the surface, a singles-only hitter might not sound like the most entertaining player, but in his prime, Ichiro was can't-miss television. He could beat you with his arm -- his 10 Gold Gloves a testament to his defensive prowess -- or his legs, as his 507 (and counting) stolen bases rank 36th all-time. He's one of the most quotable players ever, purveying pearls of wisdom such as this gem:

"Chick who dig home runs aren't the ones who appeal to me. I think there's sexiness in infield hits because they require technique. I'd rather impress the chicks with my technique than with my brute strength. Then, every now and then, just to show I can do that, too, I might flirt a little by hitting one out."

There will never be another player quite like Ichiro Suzuki ever again.

Baseball: "Ichiro Suzuki - The International Hit King by the Numbers"