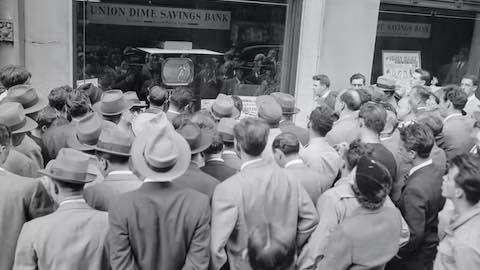 Some of the most dramatic images in World Series history are ingrained in the minds of baseball fans thanks to television coverage. Future World Series will surely bring another timeless highlight to the 12 million or so viewers expected to watch.

Yet the first 43 World Series weren't televised at all.

It wasn't until the 1947 series between the New York Yankees and Brooklyn Dodgers that fans could watch their favorite players duke it out on screen.

As I detail in my book "Center Field Shot: A History of Baseball on Television," which I co-authored with Robert Bellamy, the telecasts became a sensation.

They drew millions of Americans to a new medium at a time when there were no national networks, only a handful of stations and somewhere between 50,000 and 60,000 TVs in the entire country.

Negotiations go down to the wire

In August 1947, the television industry anticipated a possible all-New York World Series: The New York Yankees had a huge lead in the American League, while the Brooklyn Dodgers also held a substantial one in the National League.

If the two teams met in October, New York's three television stations -- run by NBC ABC, and the now-extinct DuMont -- decided they wanted to cover the games.

But the rights to televise the World Series games were held by the Mutual Broadcasting System, a radio network that had no television division. Thus, Mutual would need to farm out the coverage to one or more New York stations.

Although no national television network existed at the time, NBC, DuMont and CBS did have the means to link stations on the Eastern Seaboard through a combination of coaxial cable, microwave and over-the-air broadcast transmissions, expanding the potential audience for the World Series. The Series would air on eight stations in four markets: New York City, Philadelphia, Washington and Schenectady, New York.

While the Yankees-Dodgers series materialized, the televising of the Series almost didn't.

The predictable stumbling block was money. Baseball commissioner Albert B. "Happy" Chandler wanted $100,000 for the television rights to the Series. Gillette, the sponsor of the radio coverage on the Mutual Broadcasting System, balked at the steep price given television's limited penetration -- only 50,000 to 60,000 U.S. households owned TVs at the time. The radio rights to reach the nation's 29 million homes with radios had cost Mutual only $175,000.

Initial negotiations produced an offer of $60,000 from two sponsors: Gillette and the Ford Motor Company. New York's Liebmann Breweries offered to meet Chandler's $100,000 demand, but the commissioner refused because he did not want beer ads when youngsters would be prominent members of the audience.

Even before a coverage deal had been finalized, bars, restaurants, television dealers, department stores, automobile dealerships and movie theaters started advertising the event, urging customers to come by to watch the World Series on television. And in the days and weeks leading up to the Fall Classic, the demand for television sets spiked.

The excitement pressured Chandler and the sponsors to reach a compromise.

Finally, on Sept. 26, just four days before Game 1 at Yankee Stadium, Chandler, Gillette and Ford agreed to $65,000 for the rights to televise the World Series. Production costs added another $35,000 to the sponsors' bill. Mutual, Gillette and Ford also agreed to allow all three New York TV stations and those connected to them to broadcast the game, providing the widest possible exposure.

Initial industry estimates had the Series reaching between 600,000 and 700,000 viewers, many of them located in the bars and restaurants where a substantial number of the nation's first television receivers were located.

But that forecast ended up being conservative. Although home viewing for the seven games was substantial -- 450,000 in a Hooper rating survey commissioned by Billboard -- the out-of-home viewing numbers were extraordinary: Another 3.5 million were estimated to have viewed the World Series in public locales.

Hooper's survey found that an average of 82 customers showed up at each of these public locations to watch at least some of the World Series. Variety reported that bar owners saw a 500% increase in patrons during the Series, with some offering reservations to their regulars for a choice location near the TV set.

What viewers from those choice seats saw was primitive by today's standards. The screen was usually small -- 12 diagonal inches or less. The low-definition images were black and white and came from just a few cameras. No extreme close-ups were possible. There was no instant replay, so fans had to pay attention or the moment was lost.

But for the first time, they were seeing the World Series live, and for free.

The audience liked what they saw. Billboard, quoting The Newark Evening News, reported that TV "audiences hung on every turn of the video cameras and the ‘oohs and aahs' at a slide or strikeout were something radio broadcasters would give their eye teeth to hear."

It didn't hurt that the 1947 World Series ended up being so dramatic. The Yankees prevailed in seven games, but Brooklyn owned the two greatest moments.

The Washington broadcasts even reached the White House, where President Harry S. Truman, his staff and the D.C. press corps watched some of the contests. The industry magazine Televiser reported an enthusiastic response from the White House viewers: "If TV can do as good a job as that on perhaps the most difficult of all subjects to televise, then it really has arrived."

The public's embrace of the World Series on television, along with the generous coverage of the telecasts by the press, provided an important boost to the nascent television industry. The Sporting News reported that the first televised World Series increased sales for new receivers in New York to levels not seen since the early days of radio. Similar reports came from dealers in Washington and Philadelphia.

David Sarnoff, chairman of RCA -- which owed NBC and was a leading manufacturer of receivers -- regarded television's coverage of baseball and its crowning event, the World Series, as one of the most important factors in triggering the growth of the new medium.

Television makers, he concluded, "had to have baseball games and if [baseball owners] had demanded millions for the rights, we would have had to give it to them."

The television industry eventually did pay millions and then billions for those rights. Fox's latest seven-year contract, including rights to the World Series, pays Major League Baseball $5.1 billion.