Can The U.S. Intercept A North Korean Missile? 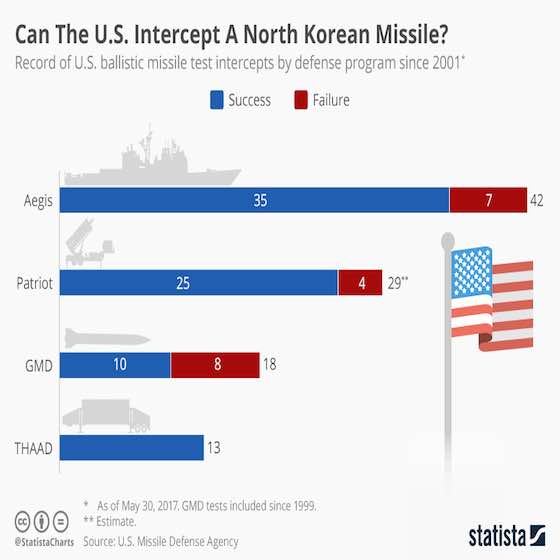 Can The U.S. Intercept A North Korean Missile?

North Korea's nuclear program has gathered serious and frightening momentum over the past few months, culminating in the isolated regime test-firing a missile over Japan and detonating a hydrogen bomb recently. As diplomatic efforts stall, eyes are turning to the region's missile-defense technology.

Despite it being South Korea's first line of defense against a nuclear attack, the U.S. Army's THAAD Missile Defense System has proven controversial in the country with residents fearful the areas surrounding the launchers could become North Korean targets. The most recent nuclear test has prompted the country's defense ministry to deploy the four remaining THAAD launchers, on top of the two already in operation. That decision may turn out to be well-founded, considering that the THAAD system has a 100 percent success rate in test interceptions. That's according to the U.S. Missile Defense Agency, who say the system hit 13 targets in 13 attempts up to May 2017 (as well as another successful test since then).

Countries in the region can also count on the Aegis missile system fitted to U.S. and Japanese naval vessels. Its Raytheon Standard missiles cannot currently engage ICBMs but they are capable of destroying ballistic missiles. They have proven reasonably reliable in tests, destroying 35 targets and failing on seven occasions. The U.S. Patriot surface to air missile system is also used by South Korea and Japan. When it is used to engage missiles, it has a shorter range and is more effective protecting strategic targets rather than larger areas. Despite controversy regarding the system's record intercepting Iraqi SCUD missiles during the Gulf War, anti-missile tests have generally proven successful.

The Ground-Based Midcourse Defense is responsible for defending North America by intercepting incoming warheads in space during the midcourse phase of ballistic trajectory. So far, however, the system has proven far from reliable with only 10 out of a total of 18 tests ending in success. Israel has demonstrated how far missile defense technology has evolved, deploying its Iron Dome system with great success. As North Korea continues testing and sabre-ratting, the U.S. and its allies will be hoping their own defenses won't be put to a far greater test.

"Can The U.S. Intercept A North Korean Missile?"