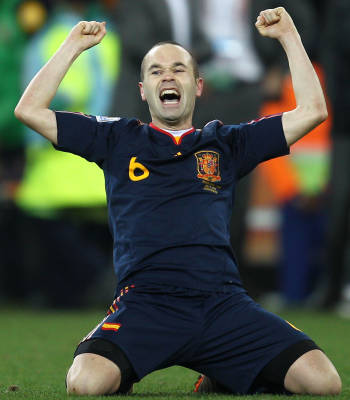 The 2010 FIFA World Cup in South Africa broke new ground simply by being held on African soil for the first time.

Those were the most obvious milestones set in South Africa this year, but the rest of the tournament also had a number of firsts on the field, from team results to player landmarks.

Slovenia and Greece both picked up their maiden FIFA World Cup wins in South Africa, with Slovenia downing Algeria 1-0 thanks to a Robert Koren goal and Greece seeing off Nigeria 2-1.

Japan also enjoyed a breakthrough win of sorts as their 2-1 victory against Cameroon was their first-ever FIFA World Cup finals success away from home, eight years after they defeated Tunisia 2-0 in Osaka.

New Zealand's 1-1 opening draw with Slovakia earned them their first FIFA World Cup point, after they lost all their group stage matches at their previous appearance in 1982. This year, the Kiwis drew all of their opening games, with a further 1-1 result against Italy and a goalless stalemate with Paraguay.

Dimitrios Salpingidis's equaliser against Nigeria finally ended Greece's World Cup goal drought, his strike coming after 404 minutes and over four games without result. There was a first for Daniel Agger too, but the Denmark defender would doubtless prefer not to be on this list as his own goal against the Netherlands proved his country's first on the global stage. In another unwanted precedent, Denmark were also on the receiving end of Japan's first ever three-goal haul in a FIFA World Cup final.

Didier Drogba of Cote d'Ivoire became the first African player to score against Brazil in six meetings between Brazil and teams from the African zone. On a domestic note, midfielder Michael Bradley became the first FIFA World Cup scorer to be coached by his father when he equalised for the United States in their 2-2 draw with Slovenia.

Vladimir Stojkovic became the first Serbian goalkeeper to have kept out a penalty at a FIFA World Cup when he saved a strike by Germany's Lukas Podolski. In contrast, David Villa became the first Spanish player to miss a spot-kick in the tournament when he failed to register against Honduras.

On the other side, Asamoah Gyan entered the history books as the first player to miss spot-kicks in separate editions of the competition, following up his failed effort against the Czech Republic at Germany 2006 with another fruitless attempt against Uruguay in 2010's eight.

Cuauhtemoc Blanco can now boast that he is the only Mexican international to have scored in three different FIFA World Cup final tournaments, having added South Africa 2010 to his list by finding the target against France. On the other hand, Rigobert Song did not register for Cameroon, but he nonetheless returned home with a record as the first African player to have appeared in four FIFA World Cups.

Somewhat less distinguished, Nigeria's Sani Keita and Switzerland's Valon Behrami became the first players from their countries to collect red cards at the finals when they were dismissed against Greece and Chile respectively.

Paraguay reached the quarter-finals for the first time in their history at South Africa 2010, experiencing a joy not shared by Italy, who exited the tournament without a single win to their name.

As for South Africa, they became the first FIFA World Cup host nation to be eliminated at the end of the group stage.

Chile's pair of 1-0 successes against Honduras and Switzerland were their maiden FIFA World Cup triumphs outside South America, La Roja having only previously secured wins at Uruguay 1930, Brazil 1950 and Chile 1962.

Algeria's achievement was to record their first clean sheet in the global arena as they clinched a goalless draw with no less a team than England, while Paraguay topped their group for the first time. Better still, the Netherlands managed a feat beyond all previous Oranje sides by winning each of their three group games.

Finally, the quarter-final line-up proved unprecedented with South American teams outnumbering their European counterparts by four to three, but the Europeans came out on top in the end as Spain lifted the trophy for the first time.