Trump Pulls Ahead of Clinton in Key Swing States 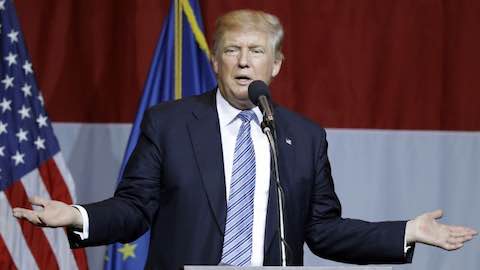 Trump Pulls Ahead of Clinton in Key Swing States

Republican Donald Trump leads Democrat Hillary Clinton in the critical general election swing states of Florida and Pennsylvania, according to the latest polling data from Quinnipiac University released Wednesday. The poll reveals Trump and Clinton are tied in Ohio.

Trump now holds a three-point lead in Florida and a two-point lead in Pennsylvania, according to the InsideGov visualization below.

But Trump's leads widen when taking into account third-party candidates, suggesting that third-party options peel away more support from Clinton than from Trump.

In Pennsylvania, Trump holds a 40 percent to 34 percent advantage, with Libertarian Gary Johnson capturing 9 percent and the Green Party's Jill Stein grabbing 3 percent. In Florida, Trump bests Clinton 41 percent to 36 percent, while Johnson gets 7 percent and Stein gets 4 percent. The race is much tighter in Ohio, where Trump leads by just 1 percent. Johnson is at 7 percent and Stein is at 6 percent in the Buckeye State.

The poll was conducted from June 30 to July 11, a particularly topsy-turvy period in the presidential contest.

Over the July 4 holiday weekend, Trump set the internet on fire when he tweeted out an image of Clinton with $100 bills and a six-pointed star with the words "most corrupt candidate ever." Critics claimed the tweet was anti-Semitic, while Trump maintained the star was based off a sheriff's star as opposed to the Star of David. (Trump deleted the original tweet, and later reposted the graphic, with a circle replacing the star.)

A few days later, FBI Director James Comey addressed Clinton's email and server use, recommending that no criminal charges be brought against the former secretary of state. But he also delivered a stinging, primed-for-attack-ads admonition to Clinton and her staff, saying, "Although we did not find clear evidence that Secretary Clinton or her colleagues intended to violate laws governing the handling of classified information, there is evidence that they were extremely careless in their handling of very sensitive, highly classified information."

And just a few days after that, three separate shootings -- in Louisiana, Minnesota and Dallas -- reignited the ongoing national conversation about gun violence and race relations. In a departure from his sharp reaction after the shooting in June at an Orlando gay club, Trump delivered a more measured response after the recent spate of violence. But the New York Times reported that the Trump team continues to struggle with how to get its candidate to respond calmly after tragedy.

However, the Quinnipiac data indicates the jam-packed news cycle has boosted Trump rather than Clinton.

Both Trump and Clinton continue to suffer from very high unfavorable marks. Things look particularly dire for Clinton in Pennsylvania, where 65 percent of voters say they have a somewhat unfavorable or strongly unfavorable opinion of her.

Trump's numbers for that question hover in the 50s, with his highest unfavorable marks coming out of Ohio.

These swing state-specific numbers are a departure from national trends. Although they both are deeply unpopular, Clinton's net favorability scores are better than Trump's, according to polling data compiled by RealClearPolitics.

The poll does offer a sliver of good news for Clinton: Voters across the board think Clinton is better prepared to be president. For instance, in Ohio, her lead balloons to 23 points on that question.

For Clinton, the challenge will be to convert that sentiment into votes. But as this most recent poll shows, that will be an uphill battle in states where people have questions about her effectiveness and leadership. While this one survey among many indicates a shift toward Trump, Election Day is still several months off, meaning there's plenty more race to go.

Politics: "Trump Pulls Ahead of Clinton in Key Swing States"