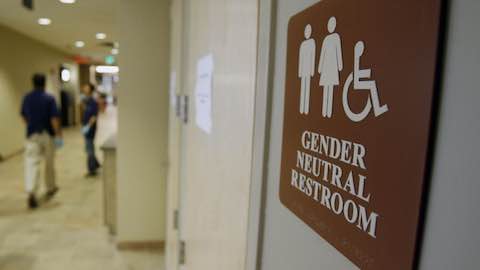 Graphiq politics site InsideGov mapped the status of state-level bathroom bills across the country. North Carolina is one of 18 states to consider bathroom bills in 2016.

The storm surrounding the spat of so-called bathroom bills kicked up again on Friday, when 10 states filed a lawsuit related to President Obama's directive about transgender students in public schools.

In May, the Obama administration directed all U.S. public school districts to permit transgender students to use the bathroom or locker room that corresponds to their gender identity. The most recent lawsuit joins a brief filed in late May by 11 other states, which seeks to stop enforcement of Obama's order.

North Carolina is engaged in separate lawsuits with the Department of Justice over the Tar Heel State's House Bill 2. In March, Republican Gov. Pat McCrory signed HB2 into law, which requires people use the public bathroom or changing area that corresponds to the biological sex "which is stated on a person's birth certificate." The requirement directly impacts transgender people, whose gender identity may not match the information on their birth certificate.

The Department of Justice found the law violates the Civil Rights Act -- which protects against discrimination based on sex, race, color, national origin and religion -- and Title IX, which bars gender discrimination in schools. North Carolina countered that HB2 does not violate federal law.

Critics of the North Carolina law called it "literally the most anti-LGBT legislation in the country." It spurred protests, boycotts and an open letter signed by over 200 CEOs and leaders from large corporations and tech companies who called for its repeal. Some businesses halted plans to expand operations into the state as a result of the law.

But it wasn't the only state to consider such legislation this year.

Using data from the National Conference of State Legislatures, InsideGov, a Graphiq politics site, mapped the status of state-level bathroom bills across the country. As the below visualization shows, North Carolina is one of 18 states to consider bathroom bills in 2016.

According to the Human Rights Campaign -- the largest lesbian, gay, bisexual and transgender advocacy group in the country -- 2016 has marked an uptick in the number of bills that target the LGBT community. The organization found, in the first two months of 2016, more than 175 anti-LGBT bills were filed in 32 states. For comparison sake, the organization tracked 125 anti-LGBT bills in total in 2015.

Of the 175 bills in 2016, the Human Rights Campaign counted 44 as specifically anti-transgender, with the majority of those targeting public bathroom use. It's worth noting that, because the report came out in February, those figures don't include data from the most recent four-plus months, or the North Carolina law.

The North Carolina bill became law on March 23. It came in response to an ordinance passed by the Charlotte City Council, which extended the city's non-discrimination language to include sexual orientation and gender identity. According to news reports, the General Assembly called for a special session -- its first in 35 years -- to address the Charlotte ordinance. One local newspaper noted the bill took a remarkably quick 11 hours and 10 minutes to become law, from when the bill was introduced in the House to when McCrory signed it.

But three of the state's neighbors have rejected similar legislation this year. In early February, a Virginia House of Delegates committee voted down a bill related to bathroom and locker room use in public schools. In April, Republican state Rep. Susan Lynn proposed and withdrew a bathroom bill in Tennessee, but said she would bring it up again in 2017. And South Carolina saw a bathroom bill die in committee in late April.

According to data from the National Conference of State Legislatures, Indiana, Mississippi and Louisiana also had bathroom bills that failed. Ten other states have such bills pending.

In South Dakota, Gov. Dennis Daugaard vetoed a bathroom bill in March that focused on public schools. At the time of his veto, Daugaard emphasized the role of local officials, saying, "Local school districts can, and have, made necessary restroom and locker room accommodations that serve the best interests of all students, regardless of biological sex or gender identity."

The topic seems to be as divisive among voters as it is among lawmakers.

A CBS/New York Times poll from May found 46 percent of Americans think "transgender people should use the bathroom of the gender they were born as." But a CNN poll, also from May, revealed that 57 percent of Americans "oppose laws requiring transgender individuals to use facilities that do not match their gender identity." Although the polls address different aspects of the issue -- the former asks about bathroom use itself, while the latter asks about laws on bathroom use -- the results reflect a country closely divided.

A recent poll from Quinnipiac University shows the divide maintains in the swing states of Florida, Pennsylvania and Ohio.

The language and specifics of the various bathroom bills differ, but they often define gender or sex to provide framework for the legislation. The North Carolina bill, for example, uses the sex designation on a person's birth certificate to determine which bathroom is permissible to use. Therefore, for transgender people to use the bathroom that corresponds to their gender identity, they would have to get their birth certificate changed.

Rules about altering birth certificates vary state by state. In North Carolina, the registrar requires a "notarized statement" from the doctor who performed sex reassignment surgery or from a licensed physician who can "certify" the surgery took place. In North Carolina, at least, this necessitates transgender people get surgery in order to use the bathroom that corresponds to their identity -- something that not everyone chooses to do, or has the means to do.

When it comes to bathroom access in public schools, the crux of many of the bathroom bills introduced in 2016, the Quinnipiac survey indicates a sharper divide. As the visualization shows, the majority of people in Florida, Pennsylvania and Ohio think public schools should not be required to allow transgender students to use facilities consistent with the gender they identify with.

While Americans are more evenly divided when it comes to public facilities use, access in schools -- and the role of the federal government in that decision -- reveals starker contrasts. The CBS/New York Times poll shows 57 percent think bathroom guidelines for schools should come from state or local governments.

More: How This Third-Party Candidate Could Shake Up the Presidential Election