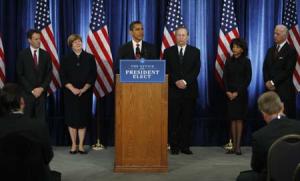 A series of recent meetings with members of Barack Obama's economic team (including running into Larry Summers on my way to an appointment in the West Wing, leading to a spirited back-and-forth that made me feel like I was back at Cambridge, debating the smartest kid in the class), left me with a pair of indelible impressions:

1) These are all good people, many of them brilliant, working incredibly hard with the best of intentions to solve the country's financial crisis.

2) They are operating on the basis of an outdated cosmology that places banks at the center of the economic universe.

Talking about our financial crisis with them is like beaming back to the second century and discussing astronomy with Ptolemy.

It's easy to get lost debating the complexity of each new iteration of each new bailout, but the devil here is not in the details -- it's in the obsolete cosmology.

If you believe the universe is revolving around the earth -- when, in fact, it isn't -- all the good intentions in the world, and all the endless nights spent coming up with plans like Tim Geithner's Public-Private Investment Program, will be for naught.

The successive bailout plans have been frustrating to many observers (yours truly included), but when you realize how fully the economic team is mired in a bank-centric universe, all the moves suddenly make perfect sense.

Here is one example.

Everybody agrees on the paramount importance of freeing up credit for individuals and businesses.

In a bank-centric universe, the solution was a bailout plan giving hundreds of billions to banks. It failed because, instead of using the money to make loans, the banks "are keeping it in the bank because their balance sheets had gotten so bad," as the president himself acknowledged on Jay Leno.

As a result, the administration, again according to the president, had to "set up a securitized market for student loans and auto loans outside of the banking system" in order to "get credit flowing again."

But think of all the time we wasted while the first scheme predictably failed.

And how much better off we'd now be if we had provided credit directly through credit unions or small, healthy community banks or, as happened during the Depression, through a new entity like the Reconstruction Finance Corp.

Luckily, there is a plethora of economic Galileos out there who recognize that the old bank-centric cosmology is just plain wrong.

But while Joseph Stiglitz, Simon Johnson, Jeffrey Sachs, Nassim Taleb, Niall Ferguson, Paul Krugman, etc. are not being imprisoned for life for their heretical views -- they are also not being listened to. Which is really surprising for an administration that has prided itself on a "team of rivals" approach.

Worse, as the fundamental flaw in the administration's cosmology becomes more and more evident, the economic team around the president is closing ranks. Even David Axelrod, once the administration's champion of a more skeptical view of a bank-centric universe, appears to be peering through the Geithner-Summers telescope.

Back in February, he crossed swords with Tim Geithner, arguing for executive pay caps.

But there he was last Sunday, whiffing on a pro-populist softball offered up by Fox News' Chris Wallace, who asked: "When taxpayers are putting up most of the money and taking more of the risk, why would the Obama administration allow some of these executives to get even richer?"

"On some of these programs, we're asking financial companies to come in and help solve this problem by providing more lending, by buying up toxic assets and so on. We don't want to create disincentives and undermine the program."

Aren't we, in fact, bribing them with massive capital infusions and loan guarantees? That's what being surrounded by a group of modern day Ptolemys will do to a person.

Of course, it's less of a surprise that Tim Geithner and Larry Summers believe in bank-centrism -- they're both creatures of it.

Which is why it wasn't a shock when it was reported that Summers had received $5.2 million for advising a hedge fund last year, or that he received hundreds of thousands of dollars in speaking fees from some of the very banks -- including J.P. Morgan, Citigroup and Goldman Sachs -- that have been on the receiving end of billions in taxpayers' money. Billions that have come with very few strings attached -- and almost no transparency.

I am in no way suggesting there is anything corrupt about this or any quid pro quo involved.

It's just that in a bank-centric universe, funneling no-strings-attached money to too-big-to-fail banks is the logical thing to do.

So is arguing that the banking crisis is just a liquidity problem rather than an insolvency one, as Geithner continues to do (and if the stress tests come back declaring Citi solvent, it will be high time to start stress-testing the stress-testers).

In a bank-centric universe, it's also no surprise that "mark-to-market" accounting rules, in which banks have to calculate and report their assets based on what those assets are actually worth, instead of what they'd like them to be worth, are being abandoned.

A good name for the reworked accounting standards would be mark-to-fantasy, because that's basically what balance sheets will be under these new rules.

Of course, to a true believer in bank-centrism, the problem with mark-to-market is that it's not good for the banks. It's the accounting equivalent of Galileo's telescope.

At the G-20 meeting, Gordon Brown proclaimed that "the old Washington consensus is over."

But when it comes to attacking the financial crisis, the zombie Wall Street / Washington consensus that has everything in America orbiting around the banks is still the order of the day.

The longer bank-centrism is the dominant cosmology in the Obama administration -- and the longer it takes to switch to a plan that reflects a cosmology in which the American people are the center of the universe and are deemed too-big-to-fail -- the greater the risk that the economic crisis will be more prolonged than necessary. And the greater the suffering the crisis will continue to cause.

There is an enormous human cost to this bank-centric dogma.

Unemployment, already at levels not seen since 1983, is skyrocketing. In many places in the country, it's approaching 20 percent (and in Detroit it's 22 percent).

Writing about the "grand book" that is the universe, Galileo declared that it "cannot be understood unless one first learns to comprehend the language and interpret the characters in which it is written. . . . Without these, one is wandering about in a dark labyrinth."

That's where we find ourselves today, wandering about in a dark financial labyrinth -- being led by good men blinded by an obsolete view of the world.

President Obama needs to open his inner economic circle to those untethered to this flawed way of thinking and acknowledge that navigating our economic crisis using maps based on a cosmology that places banks at the center of the universe can only lead to our being lost at sea for years to come.