The Second Coming of Known Unknowns 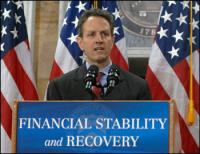 A formerly famous and now mostly forgotten poet of nonsense verse once said:

That was, of course, Donald Rumsfeld.

But it doesn't sound too different from your average briefing/Congressional testimony/interview by Timothy Geithner.

Besides being awash in toxic paper, credit default swaps, and collateralized debt obligations, we seem to be drowning in unknowns. Only, I get the sense that there are fewer unknowns than we're being told.

While we're rewarding the risk-taking shareholders of various zombie banks -- not to mention the mysterious, unconfirmed counterparties to AIG's serial recklessness -- how about rewarding the taxpayers, if not with an actual return on our bailout investment then at least with information about what exactly is being done with our money? It's time to call in all the unknowns.

Instead, we're greeted with a wall of manufactured complexity by the people whose job it is to make known unknowns into known knowns. There is nothing complex about the way CEOs like John Thain, Ed Liddy, Lloyd Blankfein, John Mack, Vikram Pandit and Ken Lewis turned bailout billions into Wall Street bonus money -- and no justification for keeping taxpayers in the dark about the giveaways (Vanity Fair's Michael Shnayerson breaks down the jaw-dropping and blood-boiling numbers).

Which brings us to the holy temple of unknown unknowns: CNBC. The financial channel's Erin Burnett ("Street Signs," "Squawk on the Street") was on "Real Time with Bill Maher" on Friday night, suddenly seeing all kinds of complexity, nuance and ambiguity in what can be known and not known about the economic crisis. Does the government know more than they're telling us, asked Bill.

And: "I don't even know that the CEOs themselves know."

And: "Tim Geithner may know more than most, but no, he doesn't know."

And as for whether the financial geniuses at CNBC should have known something:

"It's easy to say (there's) a bubble, but you don't know when it's gonna burst. And I think that the question of timing and magnitude, nobody got. That wasn't just a CNBC pundit thing, that was any expert out there." I guess she missed experts like Roubini and Taleb.

And I certainly don't remember that kind of circumspection in the run-up to the meltdown. For a look at what the CNBC sages thought they knew, and how wrong they were, there is, of course, Jon Stewart's already legendary evisceration.

As Stewart shows, the essential truth of what went on is really quite simple. Using complexity as a cover for accountability has a long historical track record of ending in disaster.

"The most dangerous thing in any economic crisis is denial," writes MIT professor Simon Johnson, a former official at the IMF, where he specialized in dealing with banking crises around the world. He's become one of the leaders of the camp arguing that the administration needs to admit the scope of the banking problem and deal with it sooner (wildly expensive) rather than later (insanely and unsustainably expensive). While "the degree of denial in the United States has fallen dramatically," Johnson writes, "there is one major aspect of denial still remaining: the scale and nature of our banking difficulties."

(Johnson, by the way, is doing his part to get rid of unknowns at his blog Baseline Scenario, which includes a terrific primer on the financial crisis.)

Johnson's insights mirror those of Paul Krugman, who writes that "officials still aren't willing to face the facts. They don't want to face up to the dire state of major financial institutions because it's very hard to rescue an essentially insolvent bank without, at least temporarily, taking it over." Not coming clean and doing what needs to be done, adds Krugman, "could result in an economy that sputters along, not for months or years, but for a decade or more."

Speaking of nationalization, CNBC's Burnett told Maher, "Nobody wants it on the left, nobody wants it on the right" -- even as calls for it continue to come from both the left and the right, demonstrating once again how obsolete that way of looking at the world is becoming. America's Business Channel, indeed.

The list of knowable knowns that we still don't know about includes the final destination of the taxpayer money the government keeps funneling to AIG. The Wall Street Journal reports that around $50 billion of the $173 billion in bailout funds given to the insurance behemoth has gone to pay off financial institutions that had insured their wildly irresponsible credit default swaps with AIG.

So who, exactly, has our money -- and why don't we know? AIG CEO Ed Liddy prefers not to say. Same with the Fed, which refused a congressional request for the names of AIG's derivative counterparties. According to unnamed sources, the list includes Goldman Sachs, Merrill Lynch / Bank of America, Morgan Stanley and Deutsche Bank.

It's worth noting that, thanks to the industry-written 2005 Bankruptcy Bill, derivatives claims are not stayed in bankruptcy -- so the financial institutions that gambled and lost would nevertheless be the first ones paid off. Isn't gaming the system fun?

The stimulus package -- and the media's coverage of it -- has also been a hotbed of known unknowns. Or, if you prefer, unreported knowns.

According to a Media Matters study of 59 network news broadcasts about the stimulus in the three weeks prior to the vote, only three mentioned concerns that the package was inadequate -- even though many economists believed it was not big enough to do the job: another known known treated like an unknown when we most needed to know. And now, of course, we're already getting reports that the bill was, indeed, too small.

I'm not saying that everything about this crisis is knowable -- far from it. But there are a number of very simple truths that are being hidden behind a smokescreen of complexity and unknowability.

It doesn't take a Ph.D. in economics to know that you can't have CEOs whose companies have received billions in bailout funds going to court and threatening to sue employees to keep the public from knowing which executives pocketed millions in bonuses -- and you can't have them pretending that no bailout money was used to pay said bonuses.

You can't have insolvent banks pretending that the problem is one of liquidity, and then using taxpayer money to protect their balance sheets instead of lending money to credit-worthy businesses and consumers.

And, ultimately, you can't allow the same people who were part of the problem to be part of the solution. There is absolutely no way on earth that the same flawed thinking that got us into this mess will ever get us out of it. We need to clean house, taking the steering wheel away from the executives and the compliant boards that steered us over the economic cliff. They didn't get it then; they still don't get it now. (See them handing out bonuses, hosting spa retreats, redecorating and throwing lavish parties while America teeters on the verge of economic collapse.)

That is something we all know that we know -- even Tim Geithner and the experts at CNBC.