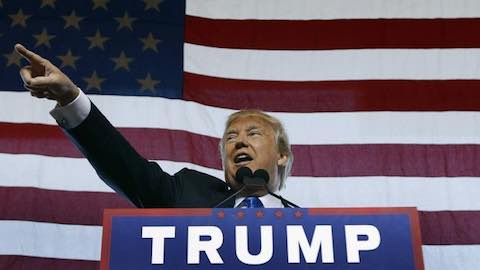 Hillary Clinton leads Donald Trump by 6 points, according to the latest polling data. Trump is coming off of one of the worst weeks of his presidential campaign.

Donald Trump is coming off one of the worst weeks of his presidential campaign. The presumptive Republican nominee's polling numbers and favorability scores are suffering another dip after he made a string of eyebrow-raising statements about a federal judge, Muslims and the shooting in Orlando. News outlets have reported conservatives are reigniting an attempt to block Trump at the Republican convention in July. And Trump recently fired his longtime campaign manager, Corey Lewandowski.

As the InsideGov visualization shows, presumptive Democratic nominee Hillary Clinton leads Trump by about 6 points as of June 17, according to polling data averages from RealClearPolitics.

It marks a shift from May 21, when Trump took his first lead against Clinton. In the following few weeks, Trump won the support of House Speaker Paul Ryan, R-Wis., and seemed to be rallying the GOP behind his candidacy.

But those feelings of support got a swift shakeup when Trump made comments about a federal judge's Mexican heritage. Trump said an Indiana-born judge with Mexican parents couldn't be impartial in a lawsuit involving Trump, because of the latter's views on immigration and support for building a wall between the U.S. and Mexico. Republicans came out en masse to voice their disapproval of the remarks.

Then, after the Orlando shooting, Trump upended the conversation yet again, renewing his call for a temporary ban on Muslim migration to the U.S. He also went on Twitter to voice support for not allowing people on the terror watch list to purchase guns. The former frustrated Republicans intent on broadening support among minority voters. The latter runs counter to the party line held by the GOP and National Rifle Association.

The statements not only had politicians squirming. As the visualization shows, Trump's net favorability -- his favorable score minus his unfavorable score -- hovers at -27 percent as of June 17.

But Trump has rebounded from a favorability dip before. After sewing up the Republican nomination in early May, the reality-star-turned-GOP-frontrunner saw his net favorability improve from his low point of -35.2 percent on April 7. The climb in May led to his best score of -22.6 percent on May 25.

As many news outlets have pointed out, both Trump and Clinton suffer from historical lows when it comes to measures of favorability. Although Clinton's -15 percent net favorability rating gives her an advantage over Trump, that's still not a number to cheer about in Clinton camp. Like Trump, Clinton has garnered high unfavorable numbers throughout the presidential race.

The bad news continues for Trump when looking at polling data from key swing states.

The general election is still a little over four months away, but polling data indicates Clinton has the edge in Florida, Ohio and Pennsylvania. And her largest lead is in Trump's coveted Keystone State.

Trump has also talked about making California a contender come November. The state has been reliably blue in recent elections, but Tim Clark, Trump's California state director, said the Republican has the potential to tap into GOP voters in the state fed up by politics as usual. "Elections are won by those who show up, and those who show up are those motivated by their candidate," Clark told the Associated Press.

But the polls in the state tell a different story. According to data from state-specific polls, Clinton leads 51.1 percent to 34 percent in the Golden State. And the rest of the map doesn't look much better.

Trump holds leads in Georgia, North Carolina and Indiana. His largest lead is in Indiana, where he has 47.5 percent to Clinton's 40 percent.

While the map looks good for Clinton, in some states, like Virginia and Arizona, her leads are slim. There's still plenty of time before the general election for Trump to make a concerted effort in those places, drawing in supporters and improving his campaign's get-out-the-vote effort. It wouldn't be the first time this election cycle Trump surprised the political class.

More: These Countries Receive the Most Foreign Aid From the U.S.

Politics: "Donald Trump Down in the Polls After Rough Week on the Trail"