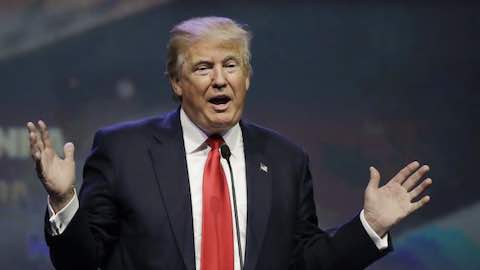 Donald Trump clawed to his first lead in a general election matchup against Hillary Clinton, surpassing the former secretary of state by 0.2 percent as of May 21. Clinton's double-digit lead evaporated in the last six weeks as Trump mounted a slow and steady climb throughout April, according to polling averages from RealClearPolitics.

As the InsideGov visualization shows, Clinton and Trump have maintained a close competition in a head-to-head race. Although Clinton has bested Trump consistently, the race did tighten to under 1 percent twice so far: On Sept. 12, Clinton led by 0.8 percent, and on Dec. 1, she led by just 0.6 percent.

But Trump's first lead -- no matter how razor-thin -- comes at a critical moment in the race, as both parties sew up their nomination fights and attention shifts to the general election. Trump vanquished his fellow Republicans in early May, when Texas Sen. Ted Cruz and Ohio Gov. John Kasich dropped out of the race.

Although polling dips and upticks happen for any number of reasons, Trump has started to focus his jabs at the Clinton campaign in the weeks since he secured his party's nomination. Trump has revived '90s era scandals and questions about former President Bill Clinton's sexual conduct. Trump sought to connect Hillary Clinton to her husband's behavior, telling a crowd in Oregon, "She was an unbelievably nasty, mean enabler and what she did to a lot of those women is disgraceful."

Clearly, Trump will continue to rely on the guns-blazing playbook he used expertly -- and effectively -- in the Republican primary.

For the Democrats, Vermont Sen. Bernie Sanders remains in the race despite a virtually insurmountable deficit in delegates. Last week, in a nod to the data visualized below, Clinton told CNN she "will be the nominee" and that it "is already done, in effect."

But Clinton is also making overtures to the more progressive wing of the party, many of whom remain firmly in Sanders' corner despite the lopsided delegate math. During a "Meet the Press" spot, Clinton repeatedly used the expression "stronger together," a slogan-ready phrase she used as a welcome mat to both Sanders supporters -- and political independents.

Clinton seems to have an uphill battle ahead of her. The most recent ABC News/Washington Post poll shows Clinton is viewed unfavorably by 53 percent of Americans. Indeed, Trump has been able to corral many Republican voters simply because he's the sole option to defeat Clinton in the general election.

However, Trump doesn't fare much better in the same poll, which finds he is viewed unfavorably by 60 percent of Americans. Those figures make "this a matchup between the two most unpopular likely presidential candidates in the history of ABC/Post election polls, dating back to 1984," according to the report on the data.

Bottom line: Look for the slugfest to continue. Those historic unfavorable numbers, combined with years spent in the public eye, provide plenty of fodder for a negative campaign between Clinton and Trump. In 2016, the race for the highest office in the land might end up being a race to the bottom.