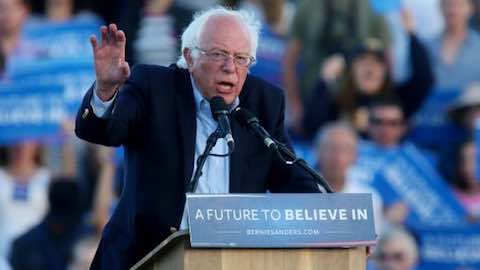 As the presidential primary season lurches toward the finish line, the Democratic race will culminate in a down-to-the-wire contest in California between Vermont Sen. Bernie Sanders and former Secretary of State Hillary Clinton. Clinton, who was up by 8.7 percent as recently as May 30, has seen her lead in the Golden State dwindle to just two points as of June 4, according to polling averages from RealClearPolitics.

Clinton is at 47.7 percent to Sanders' 45.7 percent, as the below InsideGov visualization shows. Toward the end of April, the gap narrowed for the first time after Sanders logged a string of victories, including big wins at the Washington caucus and the Wisconsin primary. But momentum swung back in Clinton's favor after she nabbed wins in delegate-rich states like New York and Pennsylvania. Her lead bounced back to 9.7 percent in mid-May.

Clinton's poll numbers went up when it looked as though she was tying up the nomination. Indeed, during an interview with CNN, she said she would be the Democratic nominee and "that is already done, in effect."

But Sanders has been all but camped out in California in the last few weeks, hanging his campaign's hopes on a strong showing during the state's June 7 primary. If Sanders pulls off an upset, or even keeps the results close, he will get a huge jolt of momentum -- and a boost to the argument that his candidacy remains viable despite Clinton's overall delegate lead.

While the two-point margin accounts for polling averages, one specific poll breaks out how each candidate is slated to do among certain populations. As has been the case throughout the primaries, Clinton looks to lean on her support among minorities during the California vote. She holds a 39-point lead among black voters, a 21-point lead among Asian voters and a six-point lead among Hispanic voters, according to data from a recent Survey USA poll.

It's interesting to note that Clinton also does well among California's white voters, who give her a 23-point advantage over Sanders. The Vermont senator has enjoyed strong support among white voters throughout the primaries, making Clinton's lead in California a noteworthy shakeup.

Sanders continues to hold an advantage over younger voters, who in California give him a five-point lead over Clinton. The same poll also shows that first-time voters overwhelmingly prefer Sanders to Clinton, 67 to 31 percent. But, as the above visualization shows, Clinton holds double-digit leads among voters 35 and older.

While many of these specific data points indicate a path to victory for Clinton in the California primary, the Sanders camp is touting those topline numbers -- boosted by recent polls from NBC News/Wall Street Journal/Marist and YouGov/CBS News -- that show he's just two points behind.

In fact, Sanders has spent the last few weeks arguing the nomination isn't official until the party convention on July 25. On Saturday, Sanders said the Democratic convention in Philadelphia would be "contested" because neither he nor Clinton would have the required number of pledged delegates at the end of the primary process. It's a rather remarkable shift from the beginning of the presidential race, when the Democratic contest looked demure compared to the schoolyard fights on the Republican side.