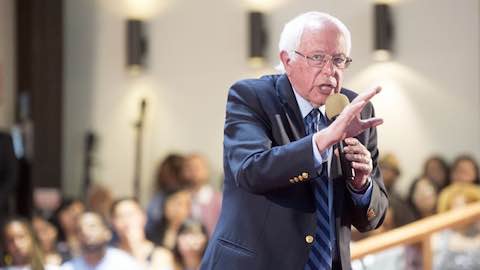 Bernie Sanders continues to be a fundraising force this presidential cycle, yet again bringing in more campaign cash than his Democratic rival, former Secretary of State Hillary Clinton. In April -- despite a string of primary losses in delegate-rich states like New York and Pennsylvania -- Sanders raised more than $26.9 million. In comparison, Clinton collected about $25 million, according to the latest data from the Federal Election Commission.

Sanders often points out that most of the money his campaign has raised comes from small-dollar donations -- $27 a pop, according to the rallying cry. The Sanders campaign has deftly tapped into the anti-establishment flavor of the presidential race, engaging people frustrated with the large sums of money flooding into politics via super PACs. That, coupled with a robust online fundraising operation, created a perfect setup for so many of his supporters to contribute smaller sums.

As the data shows, 61 percent of Sanders' contributions come from donations of less than $200, the cutoff for what the FEC considers a large donation.

The fundraising tallies are enviable data points for any politician, seeing as they indicate both breadth and depth of support. But all is not rosy on the Sanders' campaign balance sheet. While Sanders has had unmatched fundraising success, his team has also spent heavily.

In April, for example, the Sanders campaign spent about $38.6 million, almost $12 million more than it raised. The spending spree means the campaign has just shy of $5.8 million in reserves.

This so-called cash on hand figure is an important, if often overlooked, data point in assessing a campaign's overall health. Dwindling reserves mean there's less money to work with to grow a staff, plan for a candidate's travel and purchase ad time on television and radio. Although $5.8 million is a decent amount of money in political campaign terms, it isn't that much when considering Sanders continues to fight tooth and nail against Clinton for the nomination. Should he beat the odds (and the math) to become the Democratic nominee, Sanders would pivot to a sprawling, nationwide general election without a ton of financial padding.

The Sanders campaign's bank account got its first big hit in January 2016, when it spent almost $35 million and saw its cash on hand dip to about $14.7 million. Significant spending in the next three months kicked the campaign's burn rate -- how much money is spent versus how much money is raised -- to 97 percent.

Presumptive Republican nominee Donald Trump is also churning through his campaign stockpile, with a burn rate of 96 percent. But, as he often tells his supporters, Trump has largely self-funded his presidential run, loaning his campaign more than $43 million so far.

Essentially, Trump is burning through his own cash.

Indeed, of the remaining three candidates, Trump has the lowest amount of cash on hand at a little more than $2.4 million. Clinton has the most, with close to $30.2 million in the bank (or about $78.6 million, when accounting for pro-Clinton super PACs).

Sanders' supporters have been nothing if not enthusiastic, packing stadiums and parks for rallies and hitting the "contribute" button on the campaign's website more than two million times. But a bruising and long Democratic primary fight means that, despite all of the excitement, Sanders (and Clinton, for that matter) would enter the general election a bit roughed up. Lower reserves don't help that equation.

Trump, on the other hand, sewed up the Republican nomination in early May and has spent the weeks since attempting to congeal party support around his candidacy. He also started a concerted effort with fundraising, naming a national finance chair on May 5 and attending a high-dollar fundraising event in Los Angeles last week.

While Trump has plenty of general election vulnerabilities, he enters that race having not really tapped into the fundraising well yet. That gives him a fairly high ceiling for how much money he has the potential to raise in the upcoming months.

The next primary is on June 7 in California, where Sanders is putting up a fight and showing some strong polling numbers. He has 1,497 pledged delegates to Clinton's 1,768, although the spread balloons when accounting for superdelegates. Sanders has 1,539 total delegates to Clinton's 2,305; 2,383 delegates are needed to secure the nomination.