The 2016 Democratic Convention by the Numbers 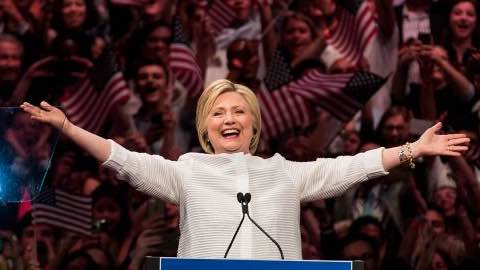 The 2016 Democratic Convention by the Numbers

An examination the Democratic National Convention and highlights the key facts and figures behind this year's event.

After a wild primary season featuring months of in-party fighting, the presidential election has settled into a pre-convention haze. The primary matchup is set, but a series of headlines have kept the race interesting, from vice presidential speculation to email server updates to international voting.

The data -- from Graphiq politics site InsideGov -- comes from PredictWise, which aggregates thousands of bets to predict the odds something will happen, from political elections to sporting events. Following the money is almost always a safer bet than trusting talk shows or political pundits to anticipate an election's outcome. Pundits are incentivized to be entertaining and draw attention. Bettors simply want to be right. After all, it's their own money on the line.

Clinton's odds finally dipped over the last few days, falling from 75 to 72 percent -- marking the first noticeable downtick in over a month. Before that, her odds held remarkably steady, despite a series of disruptive events.

First, there was the June 12 Orlando nightclub attack, in which the shooter pledged allegiance to ISIS. Given how outspoken businessman Donald Trump has been about fighting terrorism, would the former secretary lose ground?

Next came the June 23 Brexit vote, which succeeded in part due to festering anti-immigration sentiment in the U.K. Given Trump's own anti-immigration policy proposals, did the U.K.'s vote signal a larger-scale movement toward Trump-like leadership on the topic?

Finally, there was FBI director James Comey's July 5 letter regarding Clinton's "extremely careless" email behavior. Even if Comey didn't recommend an outright indictment, his criticism was direct and harsh. Surely Clinton's odds would dip as a result?

According to the money, no, no and maybe.

So far, the bettors see the race as mostly unchanged, likely believing that attacks, international voting and harsh letters do little -- in the long run -- to change Americans' big-picture perspectives about Clinton, Trump and the state of the country. (In fact, voters now prefer Clinton to Trump on terrorism, but that seemingly hasn't shifted Clinton's odds, either.)

Still, there's growing evidence to say Comey's letter had an impact, at least for now. A few state polls have moved toward Trump, possibly influenced by the FBI Director's critiques. Further troubling for Clinton, a New York Times/CBS News poll showed Clinton and Trump tied nationally, a five-point decline for the former secretary. Two-thirds of respondents said they did not think Clinton was honest or trustworthy.

As a result, bettors have budged. Still, the money seems to see the latest batch of polls as more of a speed bump than a train wreck. It's certainly bad news for Clinton, but bettors will likely wait to see if the scandal blows over (or intensifies) during the coming conventions.

In the end, it remains a race between two historically disliked candidates, with Clinton's net favorability around -15 percent, and Trump's almost twice as worse. By comparison, past candidates have hovered around 0 percent. Numbers like these make it especially difficult for Clinton or Trump to win new support, whether from undecided Americans or voters from the opposite side of the aisle.

If the last 45 days only shook bettors' perception of the race slightly, what might have a bigger impact? History suggests three possibilities.

First, the conventions. Republicans will hold their convention from July 18 to 21, while Democrats will meet from July 25 to 28. Even if political junkies pay close attention more than a year in advance of the general, the data suggests ordinary Americans wait much longer. Historically, only between 10 and 20 percent of the country pays "very close" attention before primary voting begins. That figure tends to jump to about 30 percent when Iowa and New Hampshire vote, but then holds steady again until the conventions. Only after each party officially nominates its candidate do a near-majority of Americans track the race closely.

Former President Bill Clinton (1992) saw his race flip after the convention, surging into the lead after trailing for most of the summer.

Could Trump -- who trails Clinton by about four to five points -- accomplish a similar feat? Maybe. But 2016 is different than 1992 in at least one key aspect. Both Trump and Clinton are almost universally known, already. Bill Clinton was comparatively less well known before the conventions, and he gained ground in part by introducing himselves to the American public. With that in mind, it's possible this year's conventions will actually do little to change the fundamentals of the race.

Second, consider the presidential debates. Former President Ronald Reagan famously got the better of former President Jimmy Carter in the 1980 election with well-known quips "There you go again" and "Are you better off now than you were four years ago?" In 1984, Reagan scored another point against his Democratic opponent Walter Mondale by saying "I will not exploit ... my opponent's youth and inexperience." In each case, the polls moved further in Reagan's favor following the debates.

Considering Trump's unconventional -- and sometimes successful -- debate strategies from the primaries, perhaps the upcoming debates could play an even bigger role than usual. Combine Trump's tendency to go off script with his ability to attract huge debate audiences, and there's arguably even more possibility for an unexpected, game-changing debate performance this year.

All that said, it's unclear whether debates truly have a significant effect on most presidential elections. Some suggest debates serve to "nudge" close races one way or the other, but it's hard to make a stronger case than that. As a result, Trump may need more than just a great debate performance to catch up.

Third, there's the economy. Americans view the economy as by far the most important issue in most elections, including 2016. In other words, when people are happy about the economy, they're more willing to overlook other concerns, like foreign affairs or immigration problems.

When the economy is looking good, Americans will often vote to keep the same party in the White House (see former President George H.W. Bush's landslide 1988 victory). When the economy is in the tank, they'll do just the opposite (see President Barack Obama's easy 2008 victory). In theory, if the economy were to dramatically improve or decline in the next several months, the race could shift quickly and significantly.

For now, however, economic sentiment is mixed, with a near-equal number of Americans approving and disapproving of how the White House is handling the issue.

This economic ambivalence only further serves to lock the race in place. Americans neither feel especially compelled to support a Democratic White House, nor particularly eager to see it change.

As a last consideration, keep in mind the nature of probabilities. Before you prepare yourself for our first female commander in chief, consider that Trump still has better than a 25 percent chance. That's about the same odds an NFL team has on its own 20-yard line, down a field goal, with 2:30 on the clock and the ball in its hands. If you're wondering whether you can come back from that, just ask Trump supporter Tom Brady.

More: Trump Pulls Ahead of Clinton in Key Swing States

Politics: "The 2016 Democratic Convention by the Numbers"