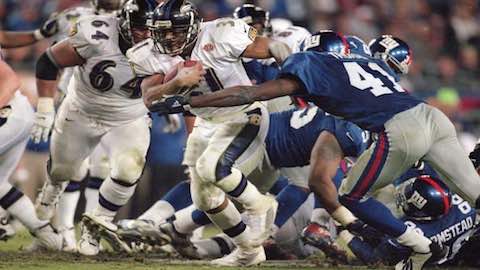 Becoming only the seventh defensive player to win a Super Bowl MVP award, Ray Lewis inspired the Baltimore Ravens to a 34-7 win over the Giants. Though his five tackles and four passes defensed did not jump off the stats page as remarkable, it was Lewis' tenacity and leadership that propelled the Ravens to the win.

The Balitmore Ravens defense completed a dominating season by holding the Giants to just 152 yards (third-lowest ever in a Super Bowl), forcing 5 turnovers, recording 4 sacks, and not allowing an offensive touchdown en route to the Raven's first Super Bowl victory.

Both defenses dominated Super Bowl XXXV early as the first five possessions of the game ended in punts. On the fifth punt, Ravens' punt returner Jermaine Lewis returned the ball 33 yards to the New York 31-yard line. Although a holding penalty on the return moved the ball back to the 41-yard line, Baltimore took only two plays to score on quarterback Trent Dilfer's 38-yard touchdown pass to wide receiver Brandon Stokley, which gave the Ravens a 7-0 lead.

Early in the second quarter, Jessie Armstead intercepted a short pass by Dilfer and returned it 43 yards for a touchdown, but the play was nullified by a penalty. Dilfer's 36-yard pass to Qadry Ismail in the second quarter set up Matt Stover's 47-yard field goal with 1:48 left in the half.

Tiki Barber's 27-yard run gave the Giants their deepest penetration of the game, to the Ravens' 29, but Chris McAlister intercepted Kerry Collins's pass on the next play to preserve a 10-0 lead.

In the third quarter, Duane Starks stepped in front of Amani Toomer and intercepted Collins's pass. Starks returned it 49 yards untouched for a 17-0 lead.

The Giants immediately cut the lead to 10 points when Ron Dixon returned the ensuing kickoff 97 yards for a touchdown. However, Jermaine Lewis then matched Dixon's kickoff return as he cut across the field and raced 84 yards for a 24-7 lead with 3:13 left in the third quarter. The 3 touchdowns in 36 seconds were a Super Bowl record.

The Giants gained just 1 first down on their final four possessions. Jamal Lewis's 3-yard touchdown run midway through the fourth quarter game Baltimore a 31-7 lead, and Robert Bailey recovered Dixon's fumble on the ensuing kickoff return to set up Stover's 34-yard field goal with 5:27 remaining to finish the scoring.

For the Giants Collins was 15 of 39 for 112 yards, with 4 interceptions. Collins had a passer rating for the game of only 7.1, the second worst in Super Bowl history. Tiki Barber was the Giants' leading rusher with 49 yards, also catching 6 passes for 26 yards and returning 2 punts for 13 yards, while Dixon tallied 6 kickoffs for 154 yards and a touchdown with a 16-yard pass catch. Giants punter Brad Maynard set a Super Bowl record with 11 punts.

Both teams combined for only 396 total yards, the lowest in Super Bowl history. The Ravens, Raiders (Super Bowl XVIII), and Seahawks (Super Bowl XLVIII) are the only Super Bowl teams to score offensive, defensive and special teams touchdowns in the same Super Bowl. 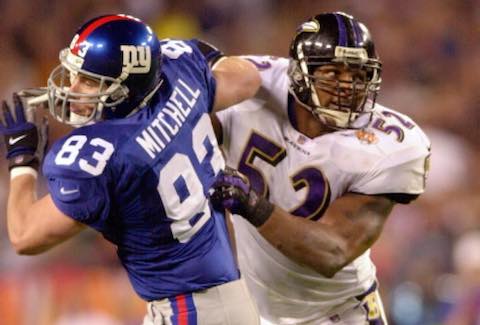 Becoming only the seventh defensive player to win a Super Bowl MVP award, Lewis inspired Baltimore to a 34-7 win over the Giants

In the span of a year, Ray Lewis went from Super Bowl sideshow to Super Bowl Most Valuable Player. Standing atop the Super Bowl winners' celebratory stage after the game, the same player who oftentimes found himself vilified, testified to a faith in his maker and his team.

"The man upstairs tells you: I never will take you through hell without bringing you to triumph," Lewis said after his Baltimore Ravens' 34-7 victory over the New York Giants in Super Bowl XXXV. "And that's why I'm sitting up here now."

There's a reason why just seven defenders now have been selected Most Valuable Player in 35 Super Bowls. Voters usually lean toward tangible statistical factors from the big game's offensive stars.

Lewis' statistical stats from Super Bowl XXXV (3 tackles, 2 assists and 4 passes defensed) weren't necessarily his best. The NFL Defensive Player of the Year didn't intercept a pass or return a fumble for a touchdown.

The select panel of voters and Internet voters simply recognized that he was the heart, soul, and leader of perhaps the best defensive unit and performance in Super Bowl history. And in accordance with his role, Lewis evoked confidence during his postgame press conference.

Lewis repeatedly used the spotlight of the most valuable player press conference to praise his defensive teammates and promote their place in history.

"It was incredible to see the way we came out and played as a team," Lewis said. "Our defense has been doing this all year. And never, never got the credit. No one can ever take this away from us. We're the best ever."

Amidst the postgame fireworks, confetti, and championship acclaim, Lewis seemed once, and for all, to be at peace when contemplating his journey through the past year.

"To be where I was last year and to hear everyone say that it's going to affect me, I had a higher power that said everything's going to be all right," he said. "And that's why I'm here right now. If you put this in a storybook, nobody would believe it."

Despite the afterglow of winning the biggest game of his career, Lewis couldn't help but take the opportunity to address any critics who still want to see him fail.

"If the world wants to see me stumble now," he said. "I'll stumble with a [Super Bowl] ring on my finger." 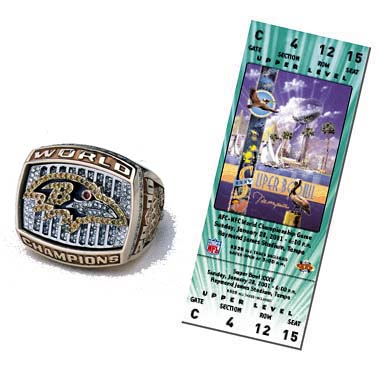