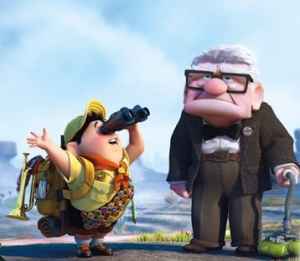 You know the most heartening thing about the new Disney-Pixar film "Up"? It may be wonderful, but it isn't perfect.

It feels nervy and adventurous and a little messy, the result of formidable creators and genuine wits working on an enormous budget, enormously well-spent.

As different as it is from its Pixar predecessors "Ratatouille" and "WALL-E," and as different as those two masterworks were from each other, "Up" shares with those films a few storytelling glitches.

Not everything adds up, and the action sequences run on a bit, as if the filmmakers were nervous about wowing us after all that uncommercial artistry.

Yet the expansive emotional landscape of "Up" is something new. Disney stockholders surely would prefer the Pixar crew to crank out another "Cars," spinning off another few billion in merchandising. (The "Up" budget is estimated to be $175 million, not including marketing costs.)

While I realize the crucial role black ink plays in Pixar's continued artistic health and well-being, I say: More power to these people. They are making the best films coming out of contemporary Hollywood.

For most of his life, balloon salesman Carl Fredricksen, voiced by Ed Asner, shared a dream with his wife, Ellie, to travel to Paradise Falls in South America. (The fictional locale was inspired by the tepui "tabletop" mountains of Venezuela, among other places, where Arthur Conan Doyle set "The Lost World.")

After Ellie dies, Carl's yearning for adventure dies as well. Yet it rises again, phoenix-like, and "Up" then becomes a chronicle of an unlikely friendship.

The narrative conspires to put Carl in a box, much like the one his wonderfully detailed head resembles. Threatened with losing his charming two-story house, the grump with the shock of snow-white hair engineers a highly photogenic escape: He floats his house away, thanks to thousands and thousands of balloons, in the direction of South America. Eight-year-old Russell (voiced by Jordan Nagai, blessedly un-slick) is Carl's inadvertent stowaway, a sweet kid trying to fulfill a merit-badge requirement for aiding a senior citizen. He's looking for a father figure; Carl resists the role at first, though Russell's attitude is infectiously, almost pathologically, optimistic.

Those are the bare bones of the script, co-written by director Pete Docter, in collaboration with co-director Bob Peterson.

As with "The Incredibles," "Up" sets the back-story via newsreel footage: One of Carl and Ellie's childhood heroes, a Hemingway-brand explorer (Christopher Plummer doing the honors with silken menace), is shown as a wrongly disgraced public figure, hell-bent on proving the existence of a 13-foot bird Muntz claims to have spotted near Paradise Falls. I don't think Docter and company solved this character's place in the story, but "Up" soars all the same.

Some of the comic inventions are inspired: Muntz has a pack of dogs equipped with electronic voice boxes, which means they're talking dogs, only they speak as if they've learned English from a poorly translated Berlitz guide. A nice dog named Dug becomes a faithful friend and ally to Carl and Russell in their race to save an exotic, prehistoric bird Russell names Kevin.

The 3-D effects here are subtle and lovely, emphasizing depth (and depth of feeling) over gimmickry, but this is one 3-D animated feature that holds up terrifically well in plain old 2-D. Like all the best Pixar work, "Up" will work one way for one age group or sensibility and quite another for a different group.

Early on, Carl's courtship and decades-long marriage to Ellie is depicted in a four-minute montage.

It is almost unbearably moving -- an emotional and cinematic powerhouse, and the way composer Michael Giacchino scores it, your heart breaks several times in succession.

Yet you don't feel beaten up by the pathos, the way some of us felt as kids watching "Old Yeller."

Strike that: It doesn't recall it; it equals it.

Docter's film owes as much to the visual imagination of animation pioneer Hayao Miyazaki, who did "Howl's Moving Castle," as it does to any previous Pixar film.

Call this one "Carl's Floating Victorian." And call it marvelous.

Up MPAA rating: PG (for some peril and action).

written by Peterson and Docter; produced by Jonas Rivera.