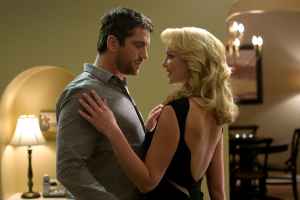 "The Ugly Truth" continues a pretty ugly run of romantic comedies squandering the on-screen talent while perpetuating the image of career women as harpies with nice clothes and no dates.

The sex of the screenwriters doesn't seem to matter (all three credited screenwriters here are women). Everyone belonging to the Writers Guild of America, apparently, has signed a secret pact to recycle the same shrill, Type-A, vaguely inhuman female lead who must learn to bend a little and appreciate the hunk in her midst, the one smitten with all her nutty foibles.

If only the foibles were funny foibles. If only the characters seemed like earthlings.

Although the star is listed as an executive producer, the blame does not lie with her.

Katherine Heigl can be funny; her comic sweet spot resides within tightly wound characters -- Doris Day, with an extra coat of lacquer -- whipping through life with an air of cool assurance masking the vulnerable woman underneath.

In "The Ugly Truth" she plays Abby Richter, an obsessively organized Sacramento TV producer whose morning show (John Michael Higgins and Cheryl Hines are wasted as the married hosts) has struggled in the ratings.

In no time his "Defending the Caveman"-style relationship advice and bikini Jell-O wrestling segments have juiced the ratings.

You want coarse language with real wit? Try "In the Loop," the stiletto-sharp British political comedy, also opening this week. You want a female character to look up to, unconstrained by the usual regressive ninny stereotypes? Watch what Gina McKee does, in a supporting role in "In the Loop." The spirit of Rosalind Russell in "His Girl Friday" lives!

This has not been an inspiring time for the battle of the sexes.

The last two years we've had a full complement of female-centric rom-coms -- among them the Butler-co-starring "P.S. I Love You," Heigl's showcase "27 Dresses," the heinous " Bride Wars," this summer's well-acted mediocrity " The Proposal" and now "The Ugly Truth."

None of these movies seems interested in the ways women and men interact and actually talk about sex, and life, and love, on planet Earth; they're so lame-brained and childish about setting up obstacles, so formulaic and witless in the banter and so patronizing about what women want, they force you to take solace in whatever skill the performers can bring, for lack of a better term, to the party.

Though Butler's often as twitchy as Mel Gibson in "Conspiracy Theory," he has his roguish appeal, neatly contrasted with Heigl's ice-princessy air, self-punctured by her occasional fits of silliness. (She does a very nice happy dance in "The Ugly Truth.")

What I wonder, though, is this: If Heigl has gone on the record as feeling like a piece of meat, or at any rate marginalized and stereotyped, by her role in "Knocked Up," does that mean she takes more pride in the material she had to work with in "27 Dresses" and now this?

The Ugly Truth is rated R (for sexual content and language)