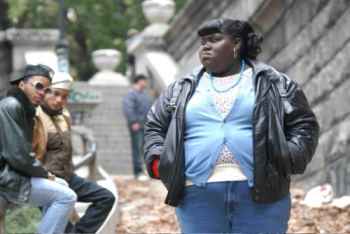 The first 20 minutes of "Precious," the full title of which is "Precious: Based on the Novel 'Push' by Sapphire," are so intense and pitched so high, you may not feel like sticking it out.

My advice: Stick it out. This is an exceptional film about nearly unendurable circumstances, endured.

You will come out the other side of it a markedly enriched filmgoer.

The story of Claireece "Precious" Jones tells of a New York City teenager living in 1980s Harlem, raped by her barely glimpsed father, abused by her unfathomably cruel mother. Precious is illiterate but bright, and against her mother's wishes she switches to an alternative school where, in a literacy workshop, she comes under the life-saving tutelage of Ms. Rain (Paula Patton).

The 16-year-old Precious has one child and another on the way, both by her own father. Her life (and director Lee Daniels' wrenching film) becomes a mosaic of pain and promise, sunny skies and grief, with enough of an emotional impact to put a dent in the most jaded audience.

The novel was published in 1996. Screenwriter Geoffrey Fletcher has toned down some of the miseries inflicted on Precious, but this is no whitewash on the order of the film version of "The Color Purple" (a book referenced directly in Sapphire's original). It is true to its source, and only in the coda do we feel as if we're getting more affirmation than the protagonist's narrative circumstances support. The film is rough around the edges but fantastically well-acted, and truly alive

The miracle of the ensemble is that it does, in fact, feel like an ensemble. Newcomer Gabourey Sidibe plays Precious, and she is phenomenally expressive in her portrayal of a huge young woman shouldering a massive amount of adversity. Mo'Nique plays the pivotal role of Precious' vicious mother -- Ronald Reagan's nightmare vision of a "welfare queen" come to life. Some have claimed this portrayal comes too close to minstrelsy for comfort. God knows Mo'Nique is asked to do some pretty horrible things, but "Precious" keeps this character just this side of cardboard monstrosity. There'll be an Oscar nomination or two in this film's near future.

And Mariah Carey -- who knew the pop diva had such a good, honest, clean performance in her? She plays a social worker, and in a couple of lengthy interactions, Carey and Sidibe find common performance ground where you wouldn't think any existed.

Daniels allows himself the fantasy outlet of Precious' imagination: When the sexual violence (or other kinds of violence) gets to be too much, the young woman escapes into herself and we see her on-screen as she dreams herself to be: all dolled up on the fashion runway, or attending some paparazzi-laden premiere. Some of the visualizations are conventionally realized, but the necessity of such scenes is clear.

Still, "Precious" is at its best when it spends time in the classroom, and when we get to know a host of tough, smart characters on their own terms.

These sequences rival those in the recent French film "The Class." We root for these survivors, not because they're being set up as rooting interests by the filmmakers, but because their back-and-forth is so sharp and vivid and dynamic. These supporting characters keep the movie hopping. It's not an easy film to watch. But neither, for many reasons, is "Precious" easy to forget.

Credits: Directed by Lee Daniels; written by Geoffrey Fletcher, based on the novel "Push" by Sapphire; produced by Daniels, Sarah Siegel-Magness and Gary Magness. A Lionsgate release.