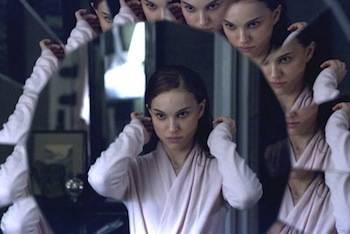 Natalie Portman (Nina) made her debut in Luc Besson's THE PROFESSIONAL, in 1994.

She won a Golden Globe Award for Best Supporting Actress and received an Academy Award nomination for her performance in Mike Nichol's CLOSER.

Natalie Portman stars in Ivan Reitman's No Strings Attached romantic-comedy opposite Ashton Kutcher, about two long-term friends who share a casual sexual relationship without falling in love and ruining everything.

Upcoming, Portman has David Gordon Green's YOUR HIGHNESS, co-starring with Danny McBride, James Franco and Zooey Deschanel. The story focuses on an arrogant, lazy prince who must complete a quest to save his father's kingdom, with Portman as his love interest. The Universal Pictures film is slated for release April 8, 2011. Following that, this summer, she will appear in Kenneth Branagh's THOR, portraying Jane Foster, love interest of Thor. The Paramount film is slated for release on May 20, 2011.

Additionally, Portman is set to topline and produce road-trip comedy BEST BUDS through her handsome charlie banner, with Vendome Pictures CEO Philippe Rousselet. The film, based on Jamie Denbo's script, centers on a woman who is on the verge of a complete nervous breakdown on the eve of her wedding. To save herself, she goes on a road trip to San Diego with two best friends, relying on a combo of marijuana and the bonds of their decades-long friendship.

On screen, Portman has starred in over twenty-five films, including HEAT, BEAUTIFUL GIRLS, EVERYONE SAYS I LOVE YOU, MARS ATTACKS!, ANYWHERE BUT HERE (GOLDEN GLOBE NOMINATION), WHERE THE HEART IS, COLD MOUNTAIN, GARDEN STATE, FREE ZONE, V FOR VENDETTA, PARIS JE T'AIME, GOYA'S GHOSTS, MY BLUEBERRY NIGHTS, MR. MAGORIUM'S WONDER EMPORIUM, THE OTHER BOLEYN GIRL, NEW YORK, I LOVE YOU and BROTHERS. Additionally, she starred in George Lucas' STAR WARS: EPISODE I THE PHANTOM MENACE, STAR WARS: EPISODE II ATTACK OF THE CLONES, and STAR WARS: EPISODE III REVENGE OF THE SITH.

The prequels to the wildly popular STAR WARS trilogy of the 70's and 80's rank among the top- grossing films ever produced worldwide.

On stage, Portman starred in Mike Nichol's Shakespeare in the Park production of The Seagull, opposite Meryl Streep, Kevin Kline and Philip Seymour Hoffman; as well as James Lapine's Broadway production of The Diary of Anne Frank.

Behind the lens, Portman has taken turns writing, directing and producing. Her credits include EVE which she wrote and directed. The film debuted at the 2008 Venice Film Festival and stars Lauren Bacall, Ben Gazzara, and Olivia Thirlby. She also wrote and directed a short film for NEW YORK, I LOVE YOU, about a day in the life of a father and daughter in Central Park. The film, released in October 2009, showcases twelve filmmakers who each directed a vignette illustrating the universal theme of love within the five boroughs of New York City. Additionally, she executive produced and starred in Don Roos' adaptation of Ayelet Waldman's novel LOVE AND OTHER IMPOSSIBLE PURSUITS, opposite Scott Cohen and Charlie Tahan. The film, which premiered at the 2009 Toronto International Film Festival, revolves around a young woman who tries to recover her marriage through her relationship with her stepson. Portman is currently developing film projects through her production company, handsomecharlie films, which has an overhead deal with Participant Media. Together with Producer Annette Savitch, the company is focused on finding intelligent, accessible films across varied genres, as well as female-driven comedies. handsomecharlie films recently set up PRIDE AND PREJUDICE AND ZOMBIES with Darko Entertainment at Lionsgate, BOOKSMART at Fox, BEST BUDS at Vendome Pictures with Portman attached to star, and they are partnered with Plan B at Paramount to produce IMPORTANT ARTIFACTS, based on the book by Leanne Shapton, with Brad Pitt and Portman attached to star. Their first produced film, HESHER, was recently bought for distribution by Newmarket at the Sundance Film Festival and is slated for release in 2011. The film is directed by Spencer Susser and stars Joseph Gordon Levitt.

Portman became the first Ambassador of Hope for FINCA, an international village banking microfinance program providing small loans and savings programs to the world's poorest families so they may create their own jobs, raise household incomes, and improve their standard of living thereby reducing poverty worldwide. As the Ambassador of Hope, Portman has proved to be a globally aware and dedicated individual who supports the work of FINCA through her advocacy and visits to FINCA International programs in countries such as Guatemala, Ecuador and Uganda. She has also met with high-level United States Members of Congress to lobby for support of international microfinance funding.

A Harvard graduate with a degree in psychology, Portman has also studied at Hebrew University in Jerusalem where she learned Arabic and Hebrew, and studied the Anthropology of Violence and Israeli history.

Mainlining Tchaikovsky's 'Swan Lake' ballet score like a drug addict, this film pushes Nina (Natalie Portman), a Manhattan ballerina devoted to her craft, to the brink of insanity and then a couple of subway stops beyond.