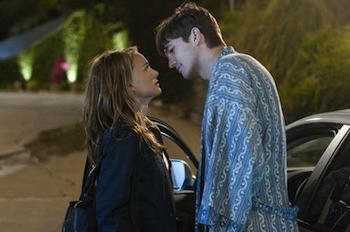 For a while, the maddeningly uneven "No Strings Attached" succeeds on what it leaves out of its romantic comedy equation.

The sour, patronizing tone of so many recent romantic comedies comes through only occasionally. Elizabeth Meriwether's script doesn't treat the female characters shabbily in the way The Ugly Truth and The Bounty Hunter and Did You Hear About the Morgans? did. Also, we don't have to sit through montages featuring people trying on wedding garb.

I sometimes wonder if the actress Katherine Heigl, who does not appear here, actually lives her life the way her "27 Dresses" character lived hers, perpetually changing clothes to some pablum on the soundtrack.

But at some point we must believe in the people we're supposed to believe in, up there on the picture screen, as the old folks say. In "No Strings Attached" Natalie Portman plays a bright but emotionally guarded L.A. doctor-in-training, who reconnects with a sometime acquaintance, played by Ashton Kutcher. His character, a fledgling writer and put-upon assistant on a "Glee"-type TV series, has three defining traits: He's "nice," "annoyingly happy" and a good lay. A more interesting actor could make do with those, but Kutcher just doesn't seem to fill up a leading role, especially when acting opposite the nuanced likes of Portman. Her character, we hear, is "mean" but obviously smart and a dear underneath all her cryptic defenses.

The supporting cast is frustratingly talented. As Portman's character, Emma, strikes up a "friends with benefits" sex-only relationship with Kutcher's Adam, and they navigate their way to a happy ending (spoiler! whoopsie!) both hear an earful from their respective circles of generic friends. The delightful Greta Gerwig, the indie actress recently gone mainstream (she was terrific in "Greenberg"), loosens up the entire ensemble as one of Portman's fellow medical students. Lake Bell, who should be starring in rom-coms, not filling out the edges (as in "It's Complicated"), shines as Adam's smitten, comically geeky TV colleague.

Director Ivan Reitman cast this female half of this picture very, very well. I wonder if a more astringent version of the screenplay got left behind somewhere around revision 27. The results are better than Reitman's previous feature, "My Super Ex-Girlfriend," which gave galling misogyny a bad name. But with the exception of Kutcher, who comports himself like a placeholder for the leading man who got lost en route to the lot, the actors do what they can with what they have. You've seen worse. The film industry is capable of better.