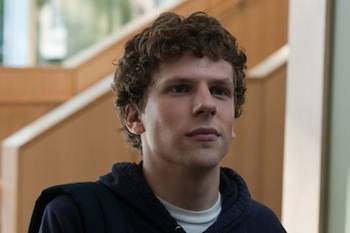 Trained in theater and film, JESSE EISENBERG (as Mark Zuckerberg in "The Social Network") made his feature film debut in the 2002 independent film Rodger Dodger, in which he starred opposite Campbell Scott and for which he was nominated for a Gotham Award.

For his performance in The Squid and the Whale opposite Laura Linney and Jeff Daniels, Eisenberg received nominations for an Independent Spirit Award and a Boston Film Critics Association Award for Best Supporting Actor.

Eisenberg has reteamed with director Ruben Fleischer this summer to shoot the film 30 Minutes or Less, opposite Danny McBride.

Eisenberg is also the lead voice of the 20th Century Fox animated film Rio, which will open next year.

On stage, Eisenberg most recently appeared in "Scarcity" at the Atlantic Theater Company.

Also a writer, Eisenberg has written several plays to be performed off-Broadway in 2011, and the music and lyrics to "Me Time!," a musical.

Eisenberg has also written for McSweeney’s, and his most recent piece was picked up by The New York Times and Harpers.

At once stealthy and breathlessly paced, The Social Network scoots at a fabulous clip. When a drunken hack job of Harvard's student directory turns into a social networking collaboration called thefacebook, Facebook founder Mark Zuckerberg takes the idea and his mad programming skills to California