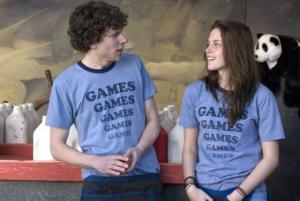 A sweet, sharp coming-of-age romance, "Adventureland" is a little warmer, a little funnier and a lot more truthful than the last 20 or 30 of its ilk. Especially its Hollywood ilk.

You know the kind: R-rated comedies about socially maladroit horndogs on the brink of adulthood, partying, hooking up, throwing up, setting their sights on the rest of their lives.

All this happens in "Adventureland" -- set in 1987, mostly within the confines of a Pittsburgh amusement park -- yet the characters, female as well as male, interact like real people, not stereotyped castoffs from John Hughes' '80s catalog.

It's my favorite American movie so far this year.

Miramax Films financed "Adventureland" and premiered it at this year's Sundance Film Festival. The studio is marketing it as another "Superbad," thereby guaranteeing a whole lot of confused teenagers who won't be getting the raunch they're promised, as well as guaranteeing a tough sell with an older crowd, the people with the most direct relationship to the film's setting, time frame and sensibility.

The movie's low-key appeal doesn't have a lot to do with "Superbad," which was, in fact, good, and was Mottola's second feature. (His engaging debut, "The Daytrippers," preceded it by more than a decade.) I guess I can't blame Miramax for capitalizing on what it sees as a film's commercial hooks, but at least one of the posters makes "Adventureland" look like it stars Bill Hader's porn-star mustache.

In the real leading role, Jesse Eisenberg of "The Squid and the Whale" plays James, a highly verbal, sexually tentative 22-year-old college graduate whose major in Renaissance studies has put him in a terrific position if, as he says, "someone wants help restoring a fresco."

Despite the Reagan Revolution, everyone in "Adventureland" has serious, real-world money problems. When his upper-middle-class father (Jack Gilpin) suffers a setback at work, James must forgo the $900 earmarked as his European travel money. So he looks for work and ends up at Adventureland, where he's employed in one of the game booths. Over the summer, he enters, tentatively, the orbit of Em, played by Kristen Stewart of "Twilight."

This cool, wary figure represents the adventureland beyond Adventureland. Em's involved with the park's married maintenance man (Ryan Reynolds), an arrangement that has begun to corrode her self-image. To James, Em is the promise of a leap into adulthood.

Other characters are played more for laughs, such as the park's husband-and-wife management team (Hader and Kristen Wiig), but the reason I fell for "Adventureland" has everything to do with its central couple, along with James' friendship with Joel, a pipe-smoking literature fiend and fellow Adventureland slacker played by Martin Starr. At one point, Joel and another staffer find themselves fairly drunk and unexpectedly close. "I'm so surprised I'm making out with you!" says the girl. "Me too," replies Joel, insulted and pleased in equal measure. Mottola's script is full of similarly spot-on exchanges.

Your response to "Adventureland" may well have a lot to do with your feelings about any of the following: a fine and mellow musical score by Yo La Tengo; the choice of "Bastards of Young" by The Replacements as the title sequence tune; and Eisenberg's exquisitely self-effacing comic timing, similar to Michael Cera's but drier.

The film doesn't try to make James into a fount of nobility or a moral paragon; it's a little painful, by design, watching this nice, smart kid try to ingratiate himself with the cool crowd by being the provider of the weed.

But the way their love story develops, Eisenberg and Stewart play off each other like magic.

From an awkward, mistimed first kiss to a mega-happy happy ending, romantic but not candied, Mottola's trip down memory lane transcends every one of its familiar component parts.

I'm eager to see it again.