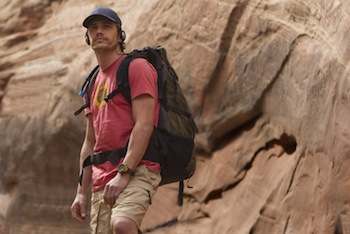 James Franco's (as Aron Ralston in "127 Hours") metamorphosis into the title role of the TNT biopic "James Dean" earned him career-making reviews, as well as a Golden Globe for Best Actor in a Motion Picture made for Television.

Franco also received nominations for an Emmy and Screen Actors Guild Award for this memorable performance.

His performance alongside Sean Penn in Gus Van Sant's MILK earned an Independent Spirit Award for Best Supporting Actor and he was nominated for a Golden Globe for his role in David Gordon Green's comedy PINEAPPLE EXPRESS, where he starred opposite Seth Rogen.

Franco was most recently seen in Ryan Murphy's EAT, PRAY, LOVE alongside Julia Roberts and was a part of an all-star ensemble cast in Shawn Levy's comedy DATE NIGHT.

He will next star as famous poet Allen Ginsberg in Rob Epstein and Jeffrey Friedman's HOWL. Next year, he will star opposite Danny McBride and Natalie Portman in David Gordon Green's comedy YOUR HIGHNESS, as well as CAESAR: RISE OF THE APES, the newest take on the Planet Of The Apes franchise.

George C. Wolfe's NIGHTS IN RODANTHE; Paul Haggis' IN THE VALLEY OF ELAH; Karen Moncrieff's ensemble drama THE DEAD GIRL; Tommy O'Haver's drama AN AMERICAN CRIME; John Dahl's THE GREAT RAID; Robert Altman's THE COMPANY; as well as CITY BY THE SEA opposite Robert DeNiro and the Martin Scorsese produced DEUCES WILD. On television, he starred in the critically acclaimed series FREAKS AND GEEKS

He wrote, directed and starred in the features GOOD TIME MAX and THE APE.

HERBERT WHITE, a short film in which he wrote and directed starring Michael Shannon, debuted at the Sundance Film Festival in 2010.

THE FEAST OF THE STEPHEN, also written and directed by Franco, premiered and won a TEDDY award at the Berlin Film Festival. Additionally, Franco directed SATURDAY NIGHT, a documentary on the week-long production of a "Saturday Night Live" episode, which premiered this year at SXSW and will open in theatres in February 2011.

His latest film he has written and directed, THE CLERKS TALE, premiered at Cannes in May. Franco plans to direct two feature films next year -- an adaptation of Charles Bukowski's HAM ON RYE and a biography on poet Hart Crane called THE BROKEN TOWER.

Oscar-winning director Danny Boyle proves it's possible to make a supercharged, kinetic movie about a man who can't move. Based on the memoir 'Between a Rock and a Hard Place,' this film follows Aron Ralston (James Franco) on his solo hike through eastern Utah.