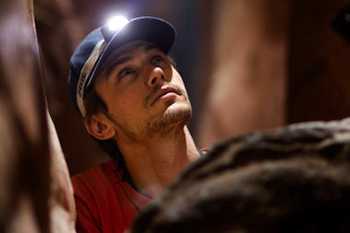 With "127 Hours," the Oscar-winning director of "Slumdog Millionaire" proves it's possible to make a supercharged, perpetually kinetic movie about a man who can't move.

It is something, this film, from director Danny Boyle, who adapted Aron Ralston's memoir "Between a Rock and a Hard Place

" with Boyle's "Slumdog" collaborator Simon Beaufoy. I just don't think it's quite the right thing.

In April 2003, Ralston, an experienced hiker like a lot of Colorado residents, took off solo on what he describes in his book as "a capriciously impromptu vacation," by dirt bike and on foot. Armed with food, water, a video camera, a dullish knife and a fairly light backpack, Ralston eventually squeezed into a tricky slot canyon in eastern Utah, 40 miles south of Interstate 70 but seemingly a galaxy away from the commercial imprints of the human race. He tested the stability of an 800-pound chockstone boulder before crawling underneath, and downward. The boulder dislodged and came crashing down, pinning Ralston's right wrist to the canyon wall.

The movie rides on pure, dizzy sensation, and certainly there is a large slice of Ralston's personality to support Boyle's attack. The Midwest-to-Colorado transplant played by James Franco loved to hike, raft, climb and bliss out in high-altitude sunshine. He'd gotten in scrapes before but nothing like what was waiting for him in the Horseshoe Canyon district of Canyonlands National Park. How he made it out of there constitutes no spoiler: If you know anything about Ralston, his book or the film, you know what he had to do to survive.

In the book, Ralston describes himself as "impatient," and Boyle's film seizes that quality. It is an adrenaline-fueled whirligig about an adrenaline-fueled character. Once he's stuck (page 27 in the 400-page book, fairly early on in the movie) Boyle keeps going. His technique, shifting film stocks and restless, impish points of view (at one point we see urine being sucked up through a straw, from inside the straw) overemphasizes the racing thoughts and scrambled memories in Ralston's mind. There's a fine and uncharacteristically quiet moment when the film's title finally appears on the screen, starting the countdown. Boyle's an entertainer of prodigious talent.

Which is not the same thing as prodigious judgment. Shot under tight but aggressively playful stylistic conditions by cinematographers Anthony Dod Mantle and Enrique Chediak, "127 Hours" never calms down. You suspect you're only getting half the truth of what this ordeal must've been like. The movie shies away from any real opportunity for introspection under horrible duress; it's too busy being too busy. Add to Boyle's irrational exuberance the bombastic music of "Slumdog" composer A.H. Rahman, plus editor Jon Harris adding left hooks and right jabs, and well before you get to the part with the knife and the amputation you may think: Too much. The assaultiveness becomes self-canceling.

Many love it, and find it an experience of unusual intensity. The craft is considerable. Franco, the game and engaging star of a virtual one-man show, holds up his part of the bargain. In an early encounter with two female hikers, along with a rather predictable welter of flashbacks, Ralston's shown to be a paradox -- a nicely socialized loner, you might say. Franco conveys that quality, even as he's throwing himself into the sheer physical challenge of the crisis at hand. My question for Boyle is simple. At what point does a director's determination to activate a static scenario become dishonest?