Matt Damon Is On Pace to Have Best Movie Career Ever 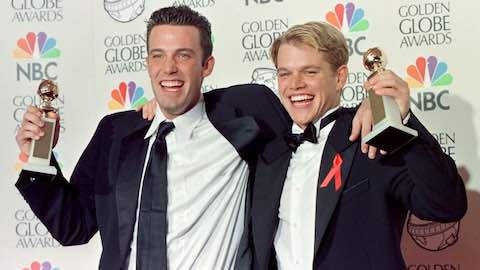 Matt Damon Is On Pace to Have Best Movie Career Ever

Quietly, Matt Damon has more great movies -- for his age -- than any other modern male star. See our full ranking and analysis in two interactive charts.

"Jason Bourne" is Matt Damon's 57th feature film, depending on how you're counting. Damon is a leading man by trade, but he's peppered his résumé with voice acting and surprise cameos, ensemble films and documentary narration. It's this versatility that's made Damon one of the busiest stars in Hollywood -- an A-list actor with a filmography longer than a career television extra.

By almost any measure, the Bourne series has been a big success for the actor, and July 29's "Jason Bourne" will only add to the series' legacy. But just how successful has Damon been throughout the course of his full career? PrettyFamous -- an entertainment site from Graphiq -- set out to answer that question in two steps. First, the team ranked all 56 Damon films, then compared his track record to other top leading men in Hollywood.

In the list below, Damon's movies are ranked by PrettyFamous' Smart Rating, which calculates a single score from zero to 100 based on six factors:

Damon's top five are a murderer's row of award winners, each nominated for best picture. Still, you'd find a similar result among many leading actors, from Tom Hanks to Tom Cruise. Instead, it's the sheer number of great films that makes Damon a standout. He notches 33 movies with a Smart Rating over 80 -- a bonafide, top-shelf film with consistently high scores from the critics.

Compare Damon's 33 great films with the counts for other high-profile leading men.*

Consider, however, that Damon is a tender 45 years old, the fourth-youngest star on the list. The four actors above him are all in their 60s and 70s. At his current clip -- about 1.2 great films per year -- Damon would match Robert de Niro's 43 in just eight years. That's 19 years earlier than the "Goodfellas" star.

The two highest-scoring Damon contemporaries -- Will Smith (47) and Leonardo DiCaprio (41) -- each have a respectable record of brilliant films, but they are unlikely to catch Damon for the same key reason: output. By PrettyFamous estimates, Damon churns out more than three feature films per year, 20 percent more than DiCaprio and twice as much as Smith.

That said, there are a few caveats here. First, the list only covers men, not women. While Hollywood tends to cast a lot more guys than gals -- thus giving the Damons of the world an inherent advantage -- a similar analysis could be done for Hollywood's leading ladies. Second, this list has a modern bias: it only covers top movie stars since the mid-1980s. Finally, this analysis is a bit light on box office, heavier on critical reviews. History may wind up concluding that Hanks was more bankable than Damon, even if Damon runs up the score on quality films.

With those caveats in mind, however, it's Damon's combination of productivity and quality that position him to achieve Hollywood's best male career in modern times. "Jason Bourne" is his next chance to build the legacy.

More: Is Jason Bourne the Best Action Series Since 2000?

Movies & Movie Reviews: Matt Damon Is On Pace to Have Best Movie Career Ever