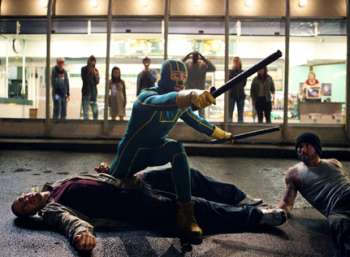 In a new introduction to the eight-part comic book series "Kick-Ass," which was created in tandem with the film version, Image Comics co-founder Rob Liefeld describes the chief strength of Mark Millar's superhero lark as extolling "hyper-real super-violence," "so far over the top it has to be seen to be believed ... it makes you cringe and wince and ultimately leaves you with your slack-jawed mouth scraping the bottom of the floor."

A tasty image, especially if you imagine the floor of your local multiplex. Deftly illustrated by John Romita Jr., Millar's "Kick-Ass" revels in geek revenge, with the novelty of teen and preteen vigilantes. High-schooler Dave Lizewski, who transforms himself into the self-appointed butt-thumper of the title, discovers there's a masked 10-year-old girl out on the mean streets already, going by the handle "Hit Girl." She is the protege of her ex-cop father, also a crime-fighter behind a mask, operating as "Big Daddy."

The task for director Matthew Vaughn was a tricky one. How to "honor" the insane gore of the print product without going too far? And how to finesse the violence directed at, or perpetrated by, the preteen (11 in the movie, because 11 is so much less offensive than 10) portrayed by Chloe Grace Moretz?

Vaughn's answers to those questions hew closely to the comic book. But there is an experiential difference between hyper-real super-violence on the page and on the screen.

I started hating this movie around the midpoint. And while Hit Girl's single usage of a c-word more commonly heard in Britain than in America has generated some controversy, the more pressing issue is how stupidly relentless the gore is, from beginning to end. As Vaughn himself told one interviewer, "When my daughter gets to 11, I'd far rather she had a mouth like a sewer than be a psychotic mass murderer." Yes, well, if you had to choose one, that'd be the one. We live in a world where people offended to their very core by the acidic humor of "Greenberg" won't think twice about letting their 12-year-olds lap up "Kick-Ass," right after they get done rewatching "Watchmen."

Millar's storyline, adapted by Jane Goldman and director Vaughn, proceeds as if it were selling the most original concept imaginable. What if superheroes actually existed in the real world? Fine, but that was the general idea behind everything from "The Incredibles" to "Hancock" to the bit in "The Dark Knight" where Batman has to put up with copycat-idiots invading his turf. Nicolas Cage, who plays Big Daddy, nearly saves "Kick-Ass" in a key early scene in which he teaches his daughter how to take a bullet (she's wearing a vest, but it still hurts). That scene is just about right, and just about nothing else is in "Kick-Ass," from Aaron Johnson's colorless interpretation of Dave to the sight of an 11-year-old getting punched and kicked and then getting bloodthirsty revenge, over and over and over. It may well be a hit, but me, I'm waiting for " Iron Man 2."

MPAA rating: R (for strong brutal violence throughout, pervasive language, sexual content, nudity and some drug use -- some involving children).