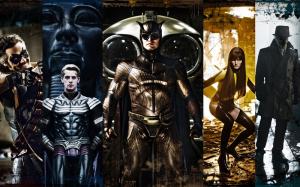 Talk all you want about the dense novelistic embroidery of the graphic novel "Watchmen," its obsessive detail and clever subversion of superhero mythology and masked avenger cliches.

But really, the appeal of the film version, such as it is, relates almost entirely to eye-for-an-eye, severed-limb-for-a-limb vengeance, two hours and 41 minutes of it, with just enough solemnity to make anyone who thought "The Dark Knight" was a little gassy think twice about which superhero myth they're calling gassy.

"Watchmen," like "Sin City" before it, relishes the specter of child molestation as a dramatic device, because once you've established a subhuman predator you can have someone like Rorschach in "Watchmen" ram an ax blade into a man's cranium in close-up, several times, over and over, and it's OK because he's vermin, and we've already seen two junkyard dogs fighting over the girl's severed leg.

The audience drools for justice, and while Rorschach is meant to be a psychopath, he's our psychopath, one of a group of forcibly retired masked crimefighters uneasily reunited to save the world, and to save themselves from the person targeting them for extinction.

I was late to the 1984 graphic novel by Alan Moore (who has disowned the film; he's like that). On the page it really is something: an unruly, meticulously cruddy depiction of a world teetering on the edge of apocalypse, plus side trips to Mars. You've heard of the Fantastic Four. Here are the Psychosexually Messed-Up and Pathologically Brutal Six.

Zack Snyder's bloated screen adaptation will go over best with fanboys, fangirls, fanmen and fanwomen who give high marks for slavish fidelity to the source material. A few things didn't make the cut (the pirate stuff, some of the conspiracy jazz), and the ending's been futzed with, but the screen "Watchmen" apes the pictorial style and many of the individual panels of illustrator Dave Gibbons' work.

The only part of the movie that feels like an addition, rather than a recycling, is the prologue (scored, all too predictably, to Dylan's "The Times They Are A-Changin'"), establishing this alternate-20th-century universe, populated by a select group of masked avengers riding high one decade, shut away the next, and by Nixon, yet.

In this universe America wins the war in Vietnam with the help of Dr. Manhattan, the most outre, superpowered and Spocklike of the Watchmen, an irradiated result of a government program gone haywire. He's played by Billy Crudup, barely there underneath all the motion-capture digitized effects. He glows, can bend space and time, and glides through the picture like a nude one-man edition of Blue Man Group.

The film takes its sweet time setting up everyone's massive chunks of back-story.

The mystery at the heart of "Watchmen" has to do with who's killing off the old gang, beginning with the most unsavory of the lot, The Comedian (Jeffrey Dean Morgan). Well, it's a tie, actually: Rorschach, played by Jackie Earle Haley, is the most unsavory, and most efficiently murderous. The comparatively clean-cut Watchmen are Nite Owl (Patrick Wilson) and his squeeze Silk Spectre II, played by Malin Akerman, possibly the worst actress in Hollywood at the moment. "Oh my God I'm on Mars!" she valley-girls at one interplanetary juncture.

Haley, practically alone among his cohorts, conveys a vivid sense of engagement. Too many of his fellow performers barely register. An exception is Carla Gugino, who plays the original Silk Spectre, a retired masked avenger herself. She's such a good actress, in addition to fulfilling the specific demands of her outfits, and yet it's depressing to see her redeem what she can in "Watchmen" as she did in "Sin City," amid the self-righteous sleaze. The brutality is pretty numbing in "Watchmen," and while the graphic novel poured it on as well, Snyder's a lunkhead and a lingerer when it comes to using that violence for storytelling purposes.

We're supposed to be wrestling with moral conundrums throughout "Watchmen," as the weakest and most sociopathic of the protectors incinerate and destroy for the good of humankind. But the film's dour viciousness is a lot less inventive than the graphic novel's.

The tone is set at the beginning (as it was on the page) by Rorschach's journal, in which he cranks off on "all those liberals and intellectuals and smooth talkers" who have wrecked the nation. You wonder if Rush Limbaugh is starring in a remake of "Taxi Driver." And you wonder if Snyder, whose earlier graphic novel adaptation, "300," was more engaging than this fetid item, will ever learn to imagine his own brand of cinematic miseries, rather than plunking someone else's on the screen.

Directed by Zack Snyder; written by David Hayter and Alex Tse, based on the graphic novel by Alan Moore and illustrated by Dave Gibbons; produced by Lawrence Gordon, Lloyd Levin and Deborah Snyder. A Warner Bros. Pictures and Paramount Pictures release.