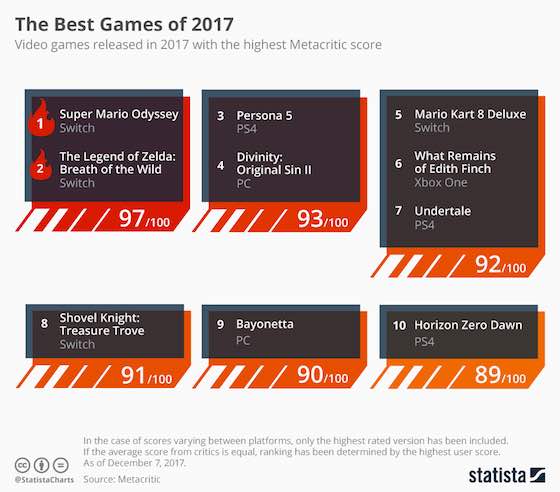 This chart shows the video games released in 2017 with the highest Metacritic score.

Nintendo has made some incredible games over the years. The Legend of Zelda: Ocarina of Time is, for example, the highest-rated video game of all time on Metacritic. And with 2017's release of their new console, Switch, they are back in a similar vein of form, putting out a number of brilliantly well-received games.

When looking at the figures from Metacritic, a website which aggregates all critic and user review scores, Switch's two flagship games, Super Mario Odyssey and The Legend of Zelda: Breath of the Wild are both safely ahead of the pack with a score of 97/100. Mario takes first place in our graphic due to a higher user score: 9.0 vs. 8.4. How good a game is, and indeed any form of entertainment, is of course very subjective. One person's Mario Kart is another's Forza 7 (87/100).