The Best Video Games Ever 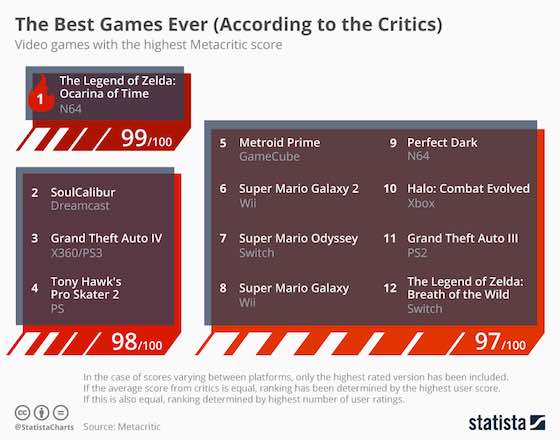 The Best Video Games Ever

This chart shows the video games with the highest Metacritic scores of all time.

Everyone that plays video games has a favorite, one that they keep on coming back to. For me, based on the amount of time I spent playing it, the enjoyment I got out of it and the feeling I get whenever I think about it, it has to be 2001's Operation Flashpoint: Cold War Crisis. The hours I spent even just in the mission editor back in the day make it an ironclad 10/10. But, according to Metacritic, it's more like an 8.5/10. Not bad, but all in all there aren't many forms of entertainment which inspire such passion and vehement differences in opinion.

According to the critics, the best game ever made is The Legend of Zelda: Ocarina of Time. The N64 game was released in 1998 and with its almost unbeatable average score of 99/100, it's going to take something very special indeed to topple it. Of course, in the age of the internet there are a lot more reviews written for games, increasing the likelihood of a rogue low score or two bringing down the average. But not many would disagree with how excellent the game was and is. In fact, while the score of 99 is only based on 22 critic reviews (compared to The Legend of Zelda: Breath of the Wild's 108), 3,850 user ratings still result in a 9.2/10 average.

Nowhere on this top ten list is that more pronounced than with Tony Hawk's Pro Skater 2 on Playstation. A critic score of 98/100 compares with a distinctly average 7.4/10 from users. When looking at the best games of all time from a gamer's perspective, there is a five-way tie for the accolade between Resident Evil 4, Harvest Moon, Shenmue II Metal Gear Solid and Castlevania: Symphony of the Night.