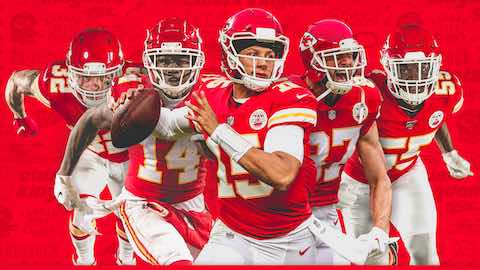 Overnight thunderstorms forced the Kansas City Chiefs to relocate their final day of preparation for Super Bowl LIV from Hard Rock Stadium back to the Baptist Health Training Facility at Nova Southeastern University, where the team practiced all week.

Will Smith’s song "Welcome to Miami" started playing as quarterback Patrick Mahomes took the first snap, and players danced through nearly the entire session that head coach Andy Reid calls a "mock game" as they went through at least a dozen plays Reid expects to call during the game. This matches the team’s typical schedule for the morning before a game.

"They're loose, to a point. They know the job at hand against a real good football team, but at the same time, we try to let our personalities show," Reid said. "That's been an emphasis, and I don't expect them to stop doing that now."

Players, coaches and other team employees, including owner Clark Hunt, gathered for an official team photo before heading back to the team hotel in Aventura. Charter planes carrying other team employees and the players’ families arrived on Friday, and Reid cleared players’ schedules in the afternoon so they could enjoy time with loved ones.

"I hope they get off their feet a little bit and enjoy their families, and then really focus in, get yourself going in the right direction," Reid said.

The Chiefs concluded their practice week in preparation for Super Bowl LIV with a spirited 75-minute workout at the Miami Dolphins Baptist Health Training Facility in Davie Wednesday.

Special teams kicked things off with a walk through, and then offense and defense worked mostly on red zone. Players did not wear pads.

The team was lively despite working in the midday sun in 80-degree heat. "I thought they had good energy," Chiefs head coach Andy Reid said. "They flew around. Got some red zone work done, which we needed. Kind of polished it up. All-in-all another positive day."

Every Chiefs player practiced, including those listed on the injury report -- defensive lineman Chris Jones, tight end Travis Kelce, center Austin Reiter, and tight end Deon Yelder. Reid indicated he expects all of his players to be healthy enough to play Sunday.

Kelce had a solid week of practice and was "moving around pretty good," in Reid's estimation.

Chiefs owner Clark Hunt attended practice with his family, and he spoke briefly to the team afterward.

On Saturday, Reid said the Chiefs will stage a mock game walkthrough, as they always do the day before games. "We'll make sure the substitutions are right, then get a team picture, and we're out of here," he said.

The Chiefs were sharp in a practice that lasted more than two hours Thursday on a beautiful day at the Dolphins Baptist Health Training Facility on the campus of Nova Southeastern University in Davie, Florida. The passing game was mostly in sync, and the defense was opportunistic.

Players wore shells, and the emphasis was on goal line, short-yardage, and nickel, and also included a review of first and second down.

"Guys got good work in and played fast," Chiefs coach Andy Reid said. "It was a great day here. The team is doing good, and they have good energy."

The team had full participation, and Reid said each of the players listed on the injury report -- defensive lineman Chris Jones, tight end Travis Kelce, center Austin Reiter, and tight end Deon Yelder -- had no issues.

After the game plan was installed last week, Reid said the coaching staff had told the players to expect some tweaks this week. But they haven't changed much as they have drawn closer to Super Bowl LIV.

Reid's former quarterback with the Eagles, Donovan McNabb, addressed the team before practice. "He's been there and done it," Reid said. "He's been in the league, played a long time. It was good hearing from him."

ESPN's Chris Berman also was a visitor to practice.​

On Friday, the Chiefs are scheduled to work on their red zone and have a brief review of the entire game plan.

DAVIE, FL - The Chiefs had full participation in their 90-minute practice at the Miami Dolphins Baptist Health Training Facility in Davie Wednesday.

Players worked up a nice sweat under sunny skies as the temperature reached 80 degrees. "They loved it," Reid said. "They got a little sunshine, so they loved it."

It was a typical late-season, Wednesday practice for the Chiefs. No helmets or pads were worn. Reid indicated he was mostly pleased with the offensive execution, which is what he usually pays attention to when he’s on the field.

Reid also has been pleased with the facility, the fields, and the hospitality. The Chiefs now have had three practices this week at the Baptist Health Training Facility. "The people here have been great, and the Dolphins people have been phenomenal," he said.

Also present were Tony Boselli and Laura Okmin from Westwood One.

After practice, Reid asked Johnson, who recently was voted into the Pro Football Hall of Fame, to speak to the team. Reid and Johnson also posed for a photo.

"I competed against him and always respected him," Reid said.

The Kansas City Chiefs advanced to Super Bowl LIV for the first time in 50 years with a 35-24 win over the Tennessee Titans in the AFC Championship. 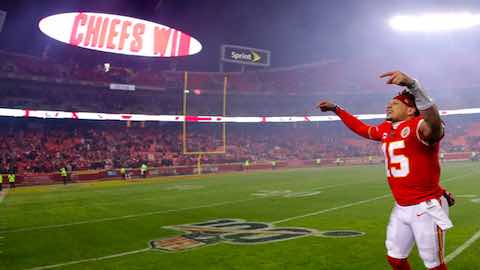 Quarterback Patrick Mahomes led the Chiefs back from a 10-0 deficit with 28 unanswered points, giving Kansas City its first lead on a highlight-reel, 27-yard run just prior to halftime.

After falling behind by 10 points midway through the first quarter, Mahomes tossed the ball to Tyreek Hill, who was sweeping to his left, on a quick "pop pass" before the speedy Hill turned the corner and dashed ahead for an 8-yard score. The Titans answered with a touchdown of their own, but Hill scored on the next possession when Mahomes found Hill downfield to narrow the deficit. Kansas City proceeded to force a three-and-out on the Titans' next series, setting up a third-consecutive scoring drive by the Chiefs that ended in a 27-yard, go-ahead scoring scramble by Mahomes in the final seconds of the first half to take a 21-17 lead over the Titans.

After no scoring in third quarter, Damien Williams ran for a 4-yard touchdown to extend the Chiefs' lead 28-17 early in the fourth quarter. Mahomes then found wide receiver Sammy Watkins for a 60-yard touchdown a drive later, putting Kansas City up 35-17. Tennessee chipped away at the deficit late in the game, as Titans' quarterback Ryan Tannehill found tight end Anthony Firkser for a 22-yard touchdown with just over four minutes remaining,

Mahomes completed 23-of-35 passes for 294 yards and three touchdowns in the AFC Championship. Mahomes finished the game with 56 rushing yards as well. Wide receiver Sammy Watkins caught seven passes for 114 yards, including a 60-yard touchdown.

Defensively, defensive end Tanoh Kpassagnon had a pair of sacks as the Chiefs held the Titans scoreless from midway through the second quarter until Firkser's score late in the fourth quarter. Kansas City held Titans' running back Derrick Henry, who had at least 180 rushing yards in each of Tennessee's previous two postseason games, to just 69 yards on the ground.

The Chiefs have scored at least 30 points in each of Mahomes' first four career postseason starts, tied for the second-longest postseason streak in the Super Bowl era. At 24 years and 138 days old on Sunday, he is the fifth-youngest quarterback to start a Super Bowl. With a victory, Mahomes would become the youngest player to win both an NFL MVP award and a Super Bowl championship, surpassing Hall of Famer EMMITT SMITH (24 years, 233 days old on the last day of his MVP 1993 season). Mahomes recorded 75 touchdown passes and 9,238 passing yards in his first 30 career games, both the most by any player through his first 30 career games in NFL history.

Running back Damien Williams has four touchdowns this postseason, including three in the Chiefs Divisional Round victory. Williams has nine total touchdowns in his first five postseason games, tied with Pro Football Hall of Famer TERRELL DAVIS (nine) and LARRY FITZGERALD (nine) for the most by a player in his first five postseason games in NFL history. Wide receiver TYREEK HILL has 21 career touchdowns of at least 40 yards, tied with Pro Football Hall of Famer JERRY RICE (21) for the third-most such touchdowns in a player's first four seasons in NFL history. Tight end TRAVIS KELCE became the first tight end in NFL history with four consecutive 1,000-yard receiving seasons. Since 2017, Hill and Kelce have combined for 7,795 receiving yards, the most by a wide receiver-tight end teammate duo over a three-season span since 1970.​

The Texans began the game with 24 unanswered points thanks to a blocked punt and fumble recovery. The Chiefs started turning the game around early in the second quarter when Mecole Hardman returned the Texans' kickoff back 58 yards deep into Houston territory. Mahomes then found tailback Damien Williams on a 17-yard score for the Chiefs' first points of the game. The Texans' failed fake punt gave Kansas City great field position, and Mahomes didn't waste any time as he connected with Kelce for a 5-yard TD. On the ensuing kickoff, Daniel Sorensen forced the ball free from Texans' return man DeAndre Carter. Mahomes connected with Kelce again just three plays later, pulling the Chiefs to within a field goal. The Chiefs had scored 21 points in just under 4 minutes.

The Chiefs defense stopped Houston's offense on the ensuing possession. Starting from their own 10-yard line, the Chiefs put together an eight-play, 90-yard scoring drive which finished with Mahomes 5-yard touchdown pass to Kelce. The Chiefs took a 28-24 lead into the second half.

The Kansas City Chiefs were 12-4 in the regular season which led to their 4th consecutive AFC West division title.

With a Kansas City Chiefs win

Nearly 50 years to the date of their last Super Bowl appearance (January 11, 1970, Super Bowl IV), the Chiefs would have their first world championship in five decades.

>In the 60th season of the Chiefs franchise, the Lombardi Trophy would return to Kansas City for the first time since the AFL merged with the NFL prior to the 1970 campaign. Lamar Hunt, who founded the franchise in 1960 and passed away in 2006, helped to create the AFL. He also asked then-NFL Commissioner Pete Rozelle to call the game the Super Bowl.