NFL's Best: Quarterbacks On The Rise 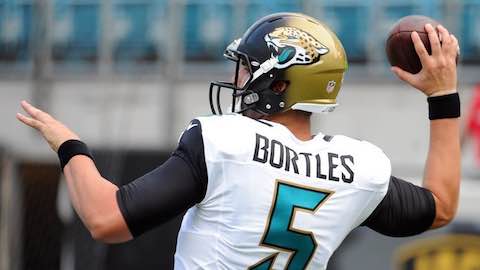 NFL's Best: Quarterbacks On The Rise

"These young quarterbacks are bringing something new to this league," says NBC analyst Cris Collinsworth. "These guys can really throw the ball. These are future superstar players we're going to be seeing for quite a long time."

Andrew Luck of the Indianapolis Colts and Russell Wilson of the Seattle Seahawks have proven that young quarterbacks can succeed right away in today's NFL. Luck (No. 1 overall) and Wilson (third round, No. 75 overall) were both selected in the 2012 NFL Draft.

Luck and Wilson are two of the many young quarterbacks taking the NFL by storm. Fourth-year quarterbacks NICK FOLES of St. Louis, ROBERT GRIFFIN III of Washington, Luck of Indianapolis, RYAN TANNEHILL of Miami, Wilson of Seattle and secondyear quarterbacks BLAKE BORTLES of Jacksonville, TEDDY BRIDGEWATER of Minnesota and DEREK CARR of Oakland all hope to build on their experience going into 2015.

A few of the rising stars at quarterback who were drafted since 2012:

"He's done a nice job. He's been really efficient. He does a good job with our system. He's handling himself really well, has good poise and is strongly competitive. He's everything we hoped for as far as mentality and competitiveness. The team really gravitates toward him." -- Jacksonville Jaguars head coach Gus Bradley

"It's pretty incredible what Teddy has done. What he's really done is make everyone around him better. The thing that excites me is he can make any throw you need him to make. He knows how to play football. He's got the intangibles you need and he is going to continue to get better and better." -- Minnesota Vikings offensive coordinator Norv Turner

"I just love the way he has taken control of that football team. He looks like he is in complete control. As a leader, he doesn't look like he is pressing at all. He has very good command. He's much more athletic than people realize, and he has a cannon. I like the way he competes from the start to the end of the game." -- ESPN analyst and former NFL head coach Jon Gruden

"Nick Foles is one of the best passers I've seen. He is special. He's big and he can throw. His throwing motion, throwing on the move, reminds me of Aaron Rodgers in Green Bay. This guy is good." -- Pro Football Hall of Fame quarterback Joe Namath

"Everything is impressive about Luck every time he plays. It starts with vision, his ability to see the whole field. He has good arm strength and accuracy at all levels of the field -- short, deep and medium. He's a strong, big, physical player. This is the best young quarterback that I've ever seen." -- NFL Network analyst Charley Casserly

"He's an incredible competitor in every way. In preparation, in game day, he's the epitome of what you want in your competitor. He's got tremendous work habits. He's got extraordinary athleticism. He's got a general all-around savvy that allows him to make great decisions under pressure. He's extremely confident too, so no matter what is going on, he's not going to waver in his focus and ability to handle things. He's just been a blast to coach and been a great team member." -- Seattle Seahawks head coach Pete Carroll