Carroll, Wilson and the Seahawks Future 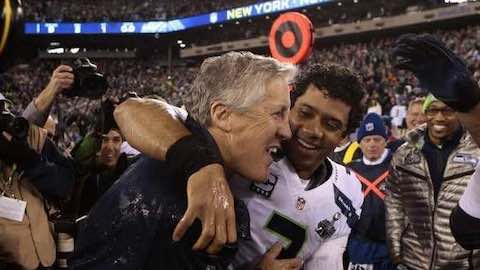 The Seahawks’ run of success through the second decade of the 21st century has endured on an axis of power by four men remarkable in their fields — Paul Allen, Tod Leiweke, Pete Carroll and Russell Wilson.

Longtime fans need no explainers about the quartet’s feats. But as the Seahawks prepare for their seventh trip to the playoffs in nine seasons, an appreciation seems worthwhile, since disruption may be in the offing.

To help newbies understand, here’s the sequence that begat success:

For $194 million, the execrable Ken Behring sells the Seahawks to Allen. He is the NFL’s wealthiest owner by a factor of five, yet persuades a majority of statewide voters to subsidize a replacement stadium for the Kingdome.

Allen hires Leiweke, a well-versed sports executive, as Seahawks CEO. Behind the revival of the 12s theme, the Seahawks reach their first Super Bowl in 2006.

Leiweke stuns the football world by hiring away from USC Carroll, who chooses from a list of four candidates, provided by Leiweke, John Schneider as general manager. The tandem is called “a collaboration.”

Despite having hired a month earlier veteran QB Matt Flynn in free agency, Schneider/Carroll take a big risk by drafting in the third round a 5-10 quarterback, Wilson, and starting him in the first game.

The result of these decisions has been the best run in the modern history of Seattle sports.

In their first 29 seasons, the Seahawks won three playoff games. Starting in 2005, they won seven division championships and are 9-5 in the postseason, including two NFC Championships and a Super Bowl victory.

Now, however, change is afoot. The death in September of Allen, absent a public plan of succession, called into question the future of franchise. The Allen-Carroll-Wilson axis created stability and success that was the envy of the league.

Leiweke in 2010 moved on to the NHL, then to the NFL front office, and is now back in Seattle with an expansion team in the NHL. Both Carroll and Wilson had contracts that expired after 2019. The chance that both could move on was real, all within 16 months of Allen’s death.

The announcement this week that Carroll’s contract had been extended to 2021 was significant, not only for the reward for Carroll. It demonstrated awareness of urgency by Allen’s sister, Jody, the sole inheritor of the massive, complicated Allen empire. The decision figures to help the Seahawks in the off-season as they begin the campaign to convince Wilson, 30, to sign a third contract and stay out of free agency.

Regarding his new boss, Carroll this week gave a glimpse behind the heavy curtain of privacy the Allens have maintained.

“We have not hung out at all . . . we had one really significant meeting and a couple of talks (about) how she wants to go about it. She's got a great love and spirit for the area and the club. It must be in the family, how she cares so much. She's ready to go, and we're excited for her.”

Obviously, first impressions are subject to change. And the cash a Seahawks sale could fetch in the open market, somewhere around $2.7 billion, could be put to massive use by the Paul G. Allen Foundation.

Having said that, everything about the Seahawks is worth more with Wilson as a part of things, almost no matter how expensive. He’s earning $21.7 million this season and $23 million in 2019, but the market expectation for a new deal for a top QB in his prime exceeds $30 million annually.

Even with a steadily increasing salary cap, that’s a huge chunk to devote to a single player while maintaining top-tier competitiveness in the rest of the lineup. And even if the Seahawks made a $160 million, five-year offer, Wilson’s wife, Ciara, could counter that her music career will advance more handily in Los Angeles, where they already spend a chunk of the off-season.

After all, she might say, Chargers QB Philip Rivers just turned 37.

If the Seahawks can’t sign Wilson to an extension, they have the option to use the franchise tag for 2020, a tool they haven’t deployed since 2010. But the outcomes of tagging are several, some odious, including the all-cash hit of $30-million plus in 2020 against the cap

The best football argument that the Seahawks can make to Wilson is that Carroll’s hires of offensive coordinator Brian Schottenheimer and line coach Mike Solari have helped make Wilson better. He’s become the best deep-ball thrower in the NFL, his pocket decisions are better and his runs are fewer, more calculated and less panicky.

Then there’s Carroll himself. Wilson is unlikely to find another head coach with whom he is in such alignment. Asked about the extension for Carroll, Wilson predictably gushed, then made a key point.

“The one thing about Coach Carroll, through all the good times, all the amazing wins we've had, through some tough losses,” he said, ” he's been the same way every day in terms of his approach.

“That's one of the things that makes him, in my opinion, a Hall of Fame football coach. Just a coach that makes a big difference.”