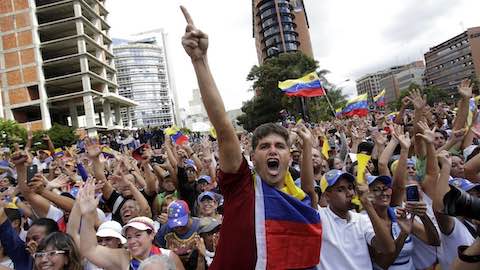 At least a dozen countries are supporting the Venezuelan opposition lawmaker Juan Guaidó, who has declared himself Venezuela's legitimate leader while President Maduro rejects calls to resign.

"I swear to formally assume the powers of the national executive as president in charge of Venezuela," Juan Guaidó said on Jan. 23 as he took the oath of office on a copy of the constitution before thousands of supporters in Caracas.

The opposition's move to sideline Maduro came after a weekend of deadly protests demanding the president's resignation, the first real popular uprising since security forces violently quashed a powerful opposition protest movement in 2017.

"Let's swear as brothers that we won't rest until we gain freedom," Guaidó told the crowd, asking them to raise their right hands along with him.

The United States, Canada, Peru, Colombia and several other countries are supporting Guaidó, saying the legislature is the only democratically elected branch remaining in Venezuela's government. But Maduro is refusing to step down.

The internal power struggle has deepened turmoil in a country already reeling from simultaneous economic, political and humanitarian crises.

How did Venezuela end up with two presidents? Here's what you need to know.

His re-election as president in May 2018 -- when Maduro won 68 percent of the vote despite having an approval rating of just 21 percent -- was widely declared fraudulent.

"The ruling Socialist Party used all the power of its increasingly authoritarian regime to tip the May 2018 election in Maduro's favor," writes Miguel Angel Latouche, a professor at the Central University of Venezuela.

As electoral irregularities mounted, the opposition called on Venezuelans to boycott the presidential election.

"Fewer than half of Venezuela's registered voters participated in the South American country's May 2018 election, punishing a government they don't support by simply not voting," writes Latouche.

Maduro was nonetheless re-elected as president of Venezuela by a wide margin. His opponent, Henri Falcón, challenged the result, saying it "lacked legitimacy."

2. How Maduro stayed in power

Some 50 other countries agreed with Falcón's judgment, refusing to recognize Maduro as Venezuela's rightful president. The United States and Europe passed harsh sanctions to punish his government.

In the months after his re-election, Maduro also survived an attempted coup, repeated calls by international leaders for a foreign military overthrow of his government and an assassination attempt by drone.

Money is one major factor. Venezuela's government is bankrupt, but Maduro "commands more than enough state resources to avoid a coup," say Oelsner and Merke. "For years, the president has purchased the loyalty of Venezuela's armed forces."

The Ministry of Defense has now been put in charge of importing, producing, selling and distributing all food in Venezuela -- a lucrative black market business in a country where people are starving.

Maduro has also "stacked his cabinet with generals," Oelsner and Merke write, personally investing the military brass in his government's survival.

The suffering of the Venezuelan people has actually helped Maduro, too, Oelsner and Merke find.

Between 2015 and 2017, Venezuelans lost, on average, 20 pounds, according to one 2017 study. Over 1 million people have fled the country in recent years, migrating to Colombia, Brazil, Ecuador and the U.S.

Those who who remain "must devote hours every day just to finding food," Oelsner and Merke write. "Starvation and endless food queues do not leave much time or energy for political resistance."

3. What do Venezuelans want?

The opposition's unilateral declaration of Guaidó as Venezuela's interim president is just its latest effort to unseat Maduro.

There are only so many ways to democratically deal with authoritarian presidents, according to Venezuela expert David Smilde: Vote them out of office, protest until they resign or make demands through face-to-face dialogue.

"Venezuelans have tried all three" since 2015, Smilde writes.

Even before Maduro's contested re-election, President Donald Trump had floated the idea of a military invasion to overthrow his government.

"Venezuela is not very far away and the people are suffering, and they are dying," said Trump in August 2017. "We have many options for Venezuela, including a possible military option if necessary."

Several exiled Venezuela leaders have since embraced the idea.

"Military intervention by a coalition of regional forces may be the only way to end a man-made famine threatening millions of lives," the former Venezuelan planning minister and Harvard professor Ricardo Hausmann wrote in January 2018.

In the view of "military option" supporters, Venezuelans would welcome a foreign intervention if it restored democracy.

Smilde asked the Venezuelan polling firm Datanálisis to ask several questions about about options for leadership change in its November 2018 nationwide poll.

Only 35 percent of respondents said they would support "a foreign military intervention to remove President Maduro from his position." More than half would reject such an operation.

"All credible polling in Venezuela says that most Venezuelans desperately want Maduro out," Smilde writes. But, he cautions, "that does not necessarily mean they are open to desperate measures."

So what do Venezuelans want?

According to the Datanálisis survey, 63 percent would support "a negotiated settlement to remove President Maduro from power."

Smilde says that makes negotiations by far the most popular option for restoring democracy in Venezuela.

This article is a round-up of stories from The Conversation's archives.