The Venezuela Crisis: A Tale of Two Presidents 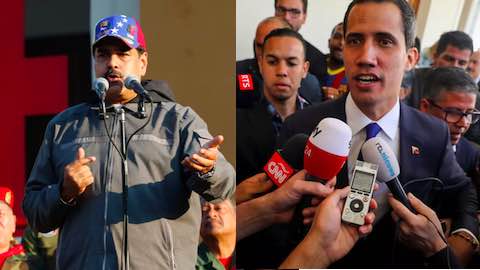 Venezuela is gripped by a struggle for power, and much of the rest of the world is leaning in. Just how did Venezuela find itself in this position?

Venezuela finds itself with two presidents engaged in a high-stakes game to control the country's future. The country has also had two "national assemblies" and many questions about how the constitution should be applied. So, how did it find itself in this position?

President Nicolás Maduro claims to be Venezuela's constitutional president because he won the presidential election in July 2018.

Although involved in politics since 2009, Guaidó was until recently little known outside political circles. A member of the Voluntad Popular ("Popular Will") party, he was an understudy to Leopoldo López, the party's leader who is currently imprisoned for allegedly encouraging violent protests seeking the ousting of Maduro.

The 1999 Bolivarian Constitution, written in the first year of the administration of former president Hugo Chávez, fulfilled a promise Chávez made in his successful 1998 presidential campaign to replace the constitution of 1991. Most Venezuelans had come to see the earlier constitution as a democratic façade, serving the interests of a corrupt, wealthy ruling elite that controlled the only two parties with any chance of winning power through elections.

Maduro was Chávez's vice president and the clear choice to succeed Chávez after his death in March 2013, only five months after winning an election for a third term. Elections during the Chávez years were criticized by observers, such as the Carter Center, for the government favoritism in the campaigns, but most saw the vote count as honest.

Chávez won easily due to strong support among the country's poor majority, who benefited from social programs funded by the country's oil bounty -- which, before Chávez, had mostly gone to the wealthy and middle class.

The Maduro era has seen more questions arise about the fairness of campaigns, but also about official results. Despite Chavez's blessing, Maduro barely won the special election to replace the deceased leader, winning only 50.6% of the vote.

In December 2015 Maduro's United Socialist Party of Venezuela (PSUV) suffered a severe defeat in the National Assembly elections of December 2015. The opposition won a super majority of seats, enough to undo the programs of the Chávez era. Much of the opposition had participated in a failed coup in 2002 and never accepted the 1999 constitution -- but all now embraced it as a tool to try to remove Maduro.

They gathered enough signatures to force a recall election upon Maduro, but the PSUV used delaying tactics to ensure that an opposition win would result in the vice president taking over. The recall effort faded away.

The opposition-controlled National Assembly began to act to slow or end Chavez's programs and to limit Maduro's power. The country's Supreme Court, filled with PSUV appointees, used a dispute over the election of three assembly deputies to rule that the body was unconstitutionally abusing its power and threatened to close the unicameral Congress down.

A legislature stripped of its powers

Maduro instead decided to convene a new National Constituent Assembly (NCA) to rewrite the constitution and create what Chávez himself had called the "communal state". This state would theoretically shift much power over policies and state spending (generated almost entirely by oil exports) to local and regional citizens' councils.

To do this, Maduro used a vague phrase in Article 348 of the constitution that says: "The initiative for calling a National Constituent Assembly may emanate from the President of the Republic sitting with the Cabinet of Ministers."

The opposition refused to participate in the election (turnout was 41%) of delegates to the NCA -- as a result it is almost entirely composed of Maduro supporters. On August 8 2017 the NCA took legislative powers for itself, away from the National Assembly, under Article 349 of the existing constitution, which is intended to avoid obstruction of a constitutional assembly's work.

Venezuela's electoral authorities scheduled the May 2018 presidential election half a year early. Though constitutional, the timing made it difficult for the deeply divided opposition to choose its candidate. A large faction boycotted the vote; another backed a candidate, the governor of an important state.

Maduro won with 67.8%. The turnout was 46.7%, low by Venezuelan standards. Maduro claims this election makes him the legitimate president and accuses the opposition, the United States and other foreign governments of fomenting a coup.

Guaidó defends his action as a constitutional route out of the country's economic and political crises -- and his move has been endorsed by much of the mainstream news media in liberal democracies. Maduro has highlighted that he won an election -- and Guaidó has not. Guaidó promised he would call elections once he has actual control of government.

Why did both presidents try so hard to justify their status as "constitutional" when almost everyone agrees the military holds the keys to power? For one thing, many in the military feel it's their job to uphold the constitution. And both sides wanted to appeal to international public opinion.

Both sides wanted the support of Venezuelans in the poor urban neighborhoods and countryside, who see the 1999 constitution as guaranteeing their right, won under Chavez, to be politically included in determining the country's future.

Latin America: "The Venezuela Crisis: A Tale of Two Presidents"