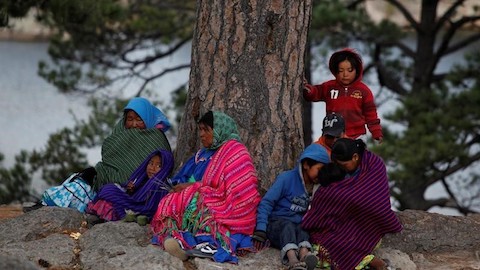 A prominent environmentalist in Mexico was shot dead recently, highlighting the dangers facing activists in Latin America and prompting calls for better protection of land and indigenous rights campaigners.

Isidro Baldenegro, an environmental rights activist, was killed by gunmen in Mexico's northern state of Chihuahua after having received death threats.

A community leader of Mexico's indigenous Tarahumara people, Baldenegro was known for his fight against illegal logging in the country's Sierra Madre mountain region.

For years he led non-violent protests against logging projects, including sit-ins and human blockades.

"The killing of Isidro Baldenegro Lopez is a tragic illustration of the many dangers faced by those who dedicate their lives to defend human rights in Latin America, one of the most dangerous regions in the work for activists," said Erika Guevara-Rosas, Americas director at Amnesty International, in a statement on Wednesday.

"It is imperative that Mexico investigates this crime and that all governments across the Americas take more action to promote and protect the very important work human rights activists do with so much courage."

Baldenegro, one of Mexico's most prominent environmentalists, was awarded the prestigious Goldman Environmental Prize in 2005 for his work against deforestation.

He is the second recipient of the prize, given to grassroots environmental activists, to be murdered in less than a year.

Honduran environmental campaigner Berta Caceres, who won the Goldman Prize in 2015 for her battle against construction of a dam that threatened to displace indigenous people, was killed in March 2016.

"This crime must not be met with impunity, like the majority of these killings are," Ben Leather, a campaigner for Global Witness, said in a statement, also on Wednesday.

"The Mexican authorities must act with conviction, prosecuting those responsible for Isidro's murder and protecting his family and colleagues."

Baldenegro's murder came at the start of a nine-day mission by United Nations Special Rapporteur on human rights defenders Michel Forst to Mexico.

"I'm deeply outraged by the murder of Isidro Baldenegro," Forst wrote on Twitter on Wednesday.

One gunman, who reportedly fled the crime scene, has been identified but not detained, according to local media.