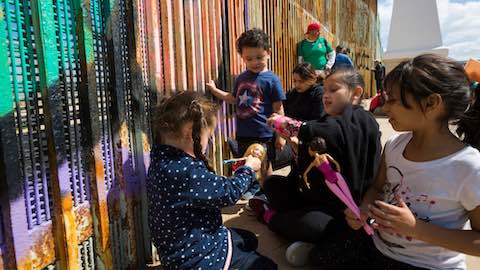 As a caravan of hundreds of migrants arrive in Tijuana, some residents there have started taking up Trump's ideology. Juan Manuel Gastélum, the mayor of Tijuana, has been seen wearing a red “Make Tijuana Great Again” baseball cap. In an interview with Milenio News, he painted the migrants as a dangerous threat.

“Sure, there are some good people in the caravan, but many are very bad for the city,” Gastélum said.

And on November 19, a few hundred protested against the migrant caravan in Tijuana chanting “Tijuana first.” In the days before the protest, locals even attacked some migrants with stones.

These are the real effects of Trump's rhetoric. Luckily, despite growing anti-immigrant sentiments, there are still many in Mexico who support and defend the migrants. This gives me hope.

Thousands of migrants are facing a humanitarian crisis in Tijuana, after walking more than 2,500 miles. Many simply want their chance to seek asylum in the United States, which is their legal right. But they may have to wait months for their chance.

Not only are the migrants dealing with unsanitary, impoverished conditions while they wait. Now they have to face the hatred that's resulted from Trump's presidency before they even cross the border.

Migrant caravans have existed for decades as a way for immigrants to travel safely together to the United States. The media spectacle around the practice now obscures an important fact: Unauthorized migration to the U.S. has been declining for years. Last year, arrests at the border fell to a 46-year low.

But just before the midterm elections, Trump decided to pick on a caravan of migrants from Honduras, telling U.S. residents that they're criminals to stoke fear -- and to make himself the hero of the story.

Trump even deployed nearly 6,000 military troops to the U.S.-Mexico border while the caravan was still weeks away, making it clear to me that this was all just politics for Trump.

All the administration has done is put the migrants -- largely women and their children -- at further risk, even subjecting them to attacks with tear gas, a weapon so brutal that international law bans it in military combat.

Mexicans themselves, once the target of Trump's racist campaign (remember when he called them rapists and murders?), have started repurposing Trump's words to point the arrow at a new target: migrants trying to escape some of the most dangerous countries in the world.

I'm the daughter of Mexican immigrants who saw their own share of hatred when they arrived in the United States. It's heartbreaking to me that Mexicans in Tijuana would now start turning their backs on these migrants, and it's clear to me that Trump has influenced them. Just listen to their chants of “Mexico first.”

The situation is dire. But for all of the hatred that's spewed out of this humanitarian crisis, there are hopeful moments.

While hundreds of anti-immigrant protesters took to the streets to express their anger, there were also people countering them with welcoming chants.

Many along the caravan's path welcomed the migrants, offering food, shelter, and clothing. A new president in Mexico, Andrés Manuel López Obrador, has also promised more humane treatment of the migrants, and plans to work with the Tijuana mayor to come up with a practical solution.

If anti-migrant Mexicans are now taking after Trump, I hope more Americans will now take after the Mexicans who chose to welcome the refugees. No matter your ideology, they deserve to be treated humanely as they act on their legal right to seek asylum.