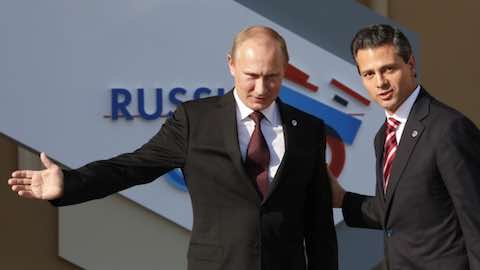 Russia's interference in the 2016 U.S. presidential election has been confirmed by no fewer than 17 U.S. intelligence and security agencies. Widespread evidence exists that Moscow's spy services also sought to influence contests held in the Netherlands, France and Germany. Many worry out loud about possible Russian machinations in Italy's general election next May.

Yet if Russia truly wants to damage the U.S. and weaken the western world order, Mexico's elections next year offer a more rewarding and more vulnerable target.

No other country influences the U.S. as much as its southern neighbor. Mexico remains one of America's largest trading partners, exchanging nearly $600 billion in goods that support millions of U.S.-based jobs and communities. It is the ancestral home to some 37 million Mexican-Americans and immigrants, and the place of residence for the largest U.S. diaspora. The two nations' energy refineries, pipelines and grids are interwoven, as are their waterways and environments. Each nation increasingly relies on the other to enhance national security and provide basic safety, sharing information and intelligence as they police local streets and go after terrorists and organized crime networks.

In July 2018, Mexico will elect not just a new president but every senator and representative, several governors and numerous local posts -- more than 3,000 positions in all. The largest turnover of elected officials in Mexico's modern history, this vote will affect the nation's path for years if not decades to come. It will determine whether Mexico remains pragmatic, open to trade and investment, supportive of regional integration and friendly to the U.S. -- or whether it turns inward, matching a U.S. turn toward protectionism and hostility and foregoing integration in favor of a more independent foreign policy and deeper relationships with other nations. For both Mexico and the U.S., such high stakes make the prospect of any potential Russian meddling all the more consequential.

At this juncture, of course, any predictions of such interference remain speculative. But remember that Russian intelligence has a long history in the Aztec nation. During the Cold War, the Soviet embassy in Mexico City was one of the largest beyond the iron curtain, housing more than 300 people. Its buildings in the centrally located Condesa neighborhood harbored a KGB and GRU (military intelligence) training ground. Dozens of agents -- many with a better command of English than Spanish --collaborated with Cuba, recruited and ran stateside spies and obsessively photographed and eavesdropped on their U.S. counterparts at their embassy an easy walk away.

Within Mexico, the U.S.S.R. at times surreptitiously supported labor and political unrest fomented by the local communist party and other dissidents. It also spread anti-U.S. propaganda in the local papers, for instance blaming the creation of HIV/AIDS on the U.S. military. But more often it cultivated a partnership with the Mexican government, given its solitary decision in the hemisphere to maintain diplomatic relations with Castro's Cuba and later its leading role in a Central American peace process to the detriment of the Reagan-backed Nicaraguan Contras.

While the nature of its mission changed with the fall of the Berlin Wall, Russia's intelligence presence did not fade. Rechristened the Federal Security Service, Russian intelligence officers continued their tours through Mexico City. In recent years, the spy network has been joined by a broad-based propaganda machine in the form of official news services, including Sputnik and Russia Today, or RT. The latter's 24/7 Spanish-language cable news has gone mainstream, gaining more traction than any other foreign media channel. In Mexico, one of its most prominent contributors is John Ackerman -- foreign policy adviser to the populist presidential candidate Andres Manuel Lopez Obrador, who leads in voter polls.

Mexico remains extremely vulnerable to the Russian interference that occurred in the 2016 U.S. election. Facebook, Twitter and Google are important sources of information for many Mexicans. And local papers and TV stations have long run flattering or condemnatory stories in exchange for ad buys or money.

The Mexican government has no specialized agency, and its electoral institute no expertise, in exposing fake news or countering embarrassing revelations from hacking. Worse, the government's recent bad behavior makes it hard to address these weaknesses. Last June the New York Times exposed the administration's use of Israeli security software known as Pegasus to hack into the cell phones of political opponents and civil society activists. This abuse has rightly created deep distrust in any official public efforts to safeguard communications or the election, leaving parties and campaigns exposed.

Disinformation campaigns are most effective when they prey on deep-seated beliefs and latent conflicts. The U.S. and Mexico have these in spades. Mexico has long-standing suspicions of its northern neighbor, never forgetting its military and other sovereign intrusions.

Trump's outbursts dovetail with depictions of the worst of U.S. intentions that you can find in any Mexican history book. His repeated demands for a border wall, his threats to tear up NAFTA and his denigration of Mexicans as criminals and rapists have created a natural opening for Russian dissemblers. Witness how Russian officials and media outlets have responded to the growing rift between the U.S. and Venezuela, saying that Latin America and the Caribbean are no longer the U.S. backyard, and "can't be treated as if an older brother were addressing other members of the lesser developed family."

A Russian disinformation campaign could easily exaggerate and amplify these hard feelings, benefiting anti-American candidates such as Lopez Obrador. This in turn could fundamentally change the nation's path forward, derailing Mexico's economic transformation and wrecking the bilateral trust and cooperation that have been three decades in the making.

Mexico needs to learn from the U.S. experience, and safeguard its electoral process from outside tampering. Mexican voters are justified in looking for candidates that will take on crime and corruption, increase transparency and accountability, boost economic opportunities and yes, defend their dignity vis-à-vis broadsides from the U.S. government. But their choice next July should be their own, not influenced by foreign agitators with very different goals in mind.