Child Soldiers From Colombia's Rebel Ranks To Be Freed 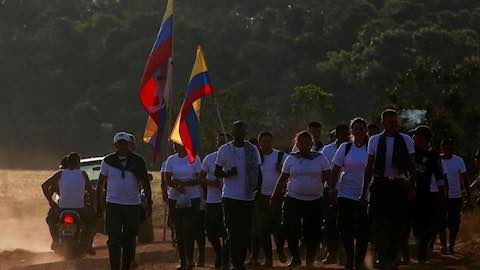 Child Soldiers From Colombia's Rebel Ranks To Be Freed

Dozens of child soldiers are expected to be released from Colombia's FARC rebel group as part of a peace deal that ended one of the world's longest-running civil wars.

Under the peace agreement between the government and the Revolutionary Armed Forces of Colombia (FARC) ending 52-years of war, the rebels pledged to free all its remaining child fighters, mostly aged 16 and 17.

The government and rebel commanders agreed last week that child combatants would be released once around 5,500 FARC fighters have moved to designated areas across Colombia where they will hand in their weapons over the next six months.

Thousands of rebel fighters are leaving their jungle camps, crossing mountains and rivers, to reach areas agreed under the peace accord, a process expected to end on Tuesday.

"The departure of minors is a priority once the FARC enter the zones," Sergio Jaramillo, the government's chief peace commissioner, said last week.

The Marxist FARC was considered one of the biggest recruiters of child soldiers in the world during its half a century of war against successive governments.

Nearly 3,700 children have been recruited into FARC ranks since 1999 and nearly one in five joined the rebel group aged 15, according to Colombia's child welfare agency (ICBF).

Children, often from indigenous and Afro-Colombian communities living in remote jungle areas, were forcibly recruited by the FARC, the government and rights groups say.

It is not clear how many child soldiers remain in rebel ranks. The FARC says it has around 20 child combatants, while government estimates put the number at 170.

Some of the rebels set to dembolise are now adults but joined the guerrilla group when they were under 18.

In September, the FARC handed over 13 teenagers, aged 15 to 17, most of whom have been reunited with relatives, according to the government.

Some former child combatants have said they voluntarily joined the FARC, many to escape abuse and poverty at home and others because they became orphans as a result of the war.

While with the rebels, children were trained to fight with AK-47 assault rifles, use grenades and mortars, and to plant home-made landmines.

Children also served as messengers, informants and porters, while girls were used as sex slaves and have undergone forced abortions, according to the government and human rights groups.

Under the peace accord, the government has pledged to provide support, including psychological counselling, to help demobilised child soldiers, often illiterate and traumatised, reintegrate into civilian life.

In an interview with the Thomson Reuters Foundation, FARC commander Victoria Sandino said some child soldiers were wary of leaving rebel ranks because they fear an uncertain future away from the insurgents they view as family.