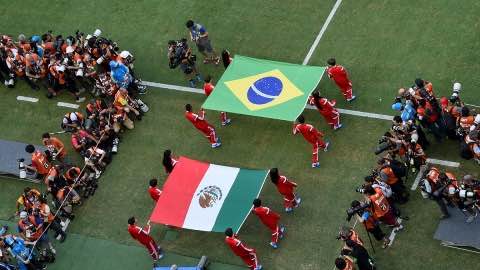 Mexico and Brazil have a long-simmering rivalry, each aspiring to lead Latin America.

Now, as two strong-willed outsiders take office as president in each country, tensions that have been more or less innocuous could escalate, with negative consequences for the entire region.

Consider the passive-aggressive diplomatic game Mexico and Brazil have often played. In global forums, each rarely votes in favor of the other: Brazil endorsed France's Christine Lagarde over Mexico's Agustin Carstens for the International Monetary Fund; Brazil's Roberto Azevedo bested Mexico's Herminio Blanco in a tight race for the top job at the World Trade Organization. Mexico routinely balks at Brazil's ambition for a permanent seat on the United Nations Security Council. Economically, each touts its economic path as superior: Mexico favoring a trade-heavy, U.S.-dependent, manufacturing-driven model; Brazil following a more commercially closed and state-led approach. The veiled sniping bursts out in the open on the soccer field, adding a nationalist spin to every shot on goal in the contests between the two national teams.

But when Andres Manuel Lopez Obrador dons the presidential sash in Mexico on Dec. 1 and Jair Bolsonaro takes over in Brasilia just a month later, three big issues could fire up these latent tensions.

The first is competition for foreign money as the new governments work to woo investors and convince them of the promise of dramatic economic policy changes, all at a time when markets are pulling back from emerging economies. Bolsonaro, through his University of Chicago-trained “super finance minister” Paulo Guedes, promises a strong free-market economic approach of widespread privatizations, lower government spending and taxes, and structural reforms to make it easier to do business. On the trade front, he talks about open Chile, not Mercosur, as a model. If he follows through, investors will flock south.

Lopez Obrador has a harder sell as he looks to move away from the private-sector-driven model of the last 25 years, expanding the role of the state in energy, infrastructure and the agricultural sector. He has taken an aggressive tone with his critics, blaming international rating agency downgrades for market declines, and accusing supporters of the now-cancelled new Mexico City airport of only caring about their own pocketbooks. And while Lopez Obrador said he will sign the new NAFTA, he also plans to dismiss most of its negotiating team, suggesting the end of a proactive trade agenda.

Migration, too, looks to be a flashpoint. Bolsonaro has talked a hard line, condemning Venezuela's regime but without much compassion for its victims-turned-refugees. He has already framed migration as a national security issue, stating “Brazil cannot be a country with open borders.” Lopez Obrador has instead called for protecting Central American immigrants, referring to them as brothers and refusing to “continue the dirty work” of the United States. These vastly different takes set up a potential conflict between Latin America's two voices as millions of Venezuelans and hundreds of thousands of Central Americans continue to flee their homes.

The biggest clash is likely to happen over Venezuela. The current Mexican government leads in condemning the corrupt authoritarian regime through the 14-member Lima group. But Lopez Obrador may do an about-face — inviting Maduro to his inauguration (he accepted) and reasserting a foreign policy of nonintervention in other nations' affairs. Bolsonaro, in contrast, has pledged to “do whatever necessary to defeat that government” in Caracas, and rumors are already flying about secret conversations with the Colombian government over a possible military intervention.

Add in the desire of both Lopez Obrador and Bolsonaro to start bilateral relations with the United States on a good foot combined with Trump's preference to divide and conquer in global negotiations and relations, and stepped-up clashes look increasingly likely.

Deepening these fissures won't help either new government address the real challenges they face: countering violence, corruption and limited economic growth. Instead, at a time when U.S. leadership is largely absent, it will hamstring a coherent Latin American approach to these and other thorny shared problems, which include forging a united front to balance China's growing influence on the region's economies. Latin American nations have difficulty coming together in the best of times; intensified feuding between the fiery, ego-driven new leaders of their two biggest economic powers will make it all the harder.