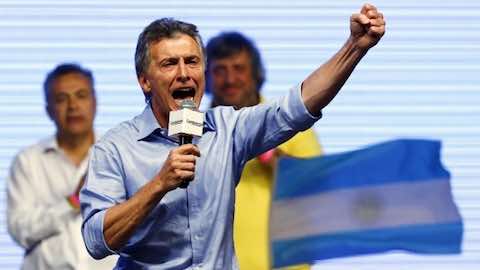 As the warm winds return, the days lengthen and the jacaranda trees explode in a riot of purple along its main avenues, Buenos Aires is also enjoying the afterglow of President Mauricio Macri and his Cambiemos coalition's resounding October win. All the big cities and provinces went their way -- the first time a party has swept the national electoral field since Argentina's return to democracy in the 1980s.

The midterm election upended two constants of Argentine politics. The first was the idea that a business-oriented party can't compete. Macri and his coalition have now won twice, and gained national traction with time. The second is that the Peronist party, the dominant political force of 20th-century Argentina, can't lose. Yet it collapsed. These two seismic political shifts are partly the result of savvy leadership. But they also reflect fundamental shifts in Argentina's economy and society.

For one hundred years, since Argentina introduced the secret ballot in 1912, the only way the capital class came to power was through voter fraud or military coups -- of which there were six in the subsequent years. Even the middle-class oriented opposition Radical party couldn't hold the executive office for long -- every one of its democratically elected presidents was ushered out early, either by a military escort or a market meltdown.

Cambiemos has defied this truism because so far it hasn't acted like a business party. While pro-market, it isn't neoliberally austere. Instead, like its populist predecessors, it has supported social programs, unemployment benefits and pension payouts to lessen the blow of stagflation for the average voter.

Macri and his team have gone further, spending big on infrastructure projects. Ubiquitous yellow signs hover every few blocks next to piles of dirt, slabs of concrete, reams of steel rods and pots of paint, touting repairs to broken sidewalks, darkened street lamps and blackened buildings.

The biggest bet and electoral payoff have come from the new Metrobus, dedicated lanes on the capital's main boulevards that snake out dozens of kilometers into wealthy and humble enclaves alike. While a similar public transportation roll-out caused havoc in Chile in 2007, tanking President Michele Bachelet's approval ratings, everyone in Buenos Aires raves about the new system, which has cut some rush-hour commutes in half.

Yet Macri's win also came from Peronist failures. The movement has all but disintegrated, its factions losing ground in the midterms. Part of the problem is its leadership, or lack thereof. Despite her legacy of economic malpractice and deep ties to corruption, former president Cristina Fernandez de Kirchner remains its standard bearer, the most visible and popular among the unpopular. But Peronism's slide into irrelevance also reflects a failure to adapt to structural economic change.

For decades, Peronism relied on a winning electoral alliance of urban unions and rural bosses. Its pillars began to wobble in the 1970s, as offices displaced factories and the countryside began emptying out, draining the votes that rural political machines could deliver.

In the 1990s Peronist president Carlos Menem tried to adapt, opening markets, attracting private sector investment and courting the growing middle class. The 2001 economic crisis stopped this internal political evolution even as it accelerated the underlying economic shifts. After much turmoil, the nation finally settled into more than a decade of Kirchner rule -- first Nestor, then his wife Cristina -- from 2003 to 2015. Together they forced out their modernizing colleagues and returned to a populist economic playbook based on protectionism, clientelism through massive social programs and a government hiring spree.

These efforts bought the loyalty of the nearly million Argentines who lost their living when GDP plummeted 20 percent, but they didn't bring back organized labor. And the high export taxes they introduced on soy, beef and other agricultural products enraged Peronism's once loyal rural base. When the economy turned -- dragged down by profligate public spending, limited investment, rampant inflation, the commodity bust and a good dose of corruption -- it left the party decimated.

Macri today has enviable approval ratings. Yet the president can still easily stumble. Despite an initial big bang of reforms -- floating the currency, resolving the debt issue with international holdouts, re-creating an independent statistics agency and lowering some public subsidies -- the government has yet to make many of the hard choices necessary to put the nation on a sustainable path. Fixing potholes and creating new bus lines are all well and good; but that won't drag Argentina into the 21st century. At some point, Macri's coalition will have to put forward its plans to take on the nation's deep-seated economic dysfunctions.

This starts with the cash economy. Few places beyond tony boutiques and restaurants welcome credit cards, and purchasing big ticket items such as cars and homes still involves suitcases stuffed with bills. The "blue market" peso-dollar exchange continues. After a fruitless trip to five cash machines, I used the hotel's favored money changer -- a woman in her thirties in a white top and jeans with meticulously folded 100 peso bills -- for walking around money. She let me know that I'd get a better rate next time if I brought $100 Benjamins instead of my lowly $20s. All of this informality means wasted time and limited sales, and in the aggregate curtails the upside of the current economic bounce. If the economy doesn't grow, Argentina's patience with the president and his coalition will grow thin.

More fundamentally, Argentina remains uncompetitive. A decade without foreign direct investment has left it technologically backward. Instead of the automation occurring in other emerging economies, labor redundancies are baked into even quotidian tasks. Buying a single cortado (coffee) took no less than two transactions, three lines and five people. This is not how a future economic powerhouse functions.

And the government mantra of gradual change depends on outside financing. While global liquidity and low interest rates have provided the $40 billion a year cushion that Argentina needs so far, the last non-Peronist government went down in economic flames when international funding disappeared.

Argentina, like all democracies, needs an opposition. With almost a third of Argentines living in poverty, there is plenty of room for a left-leaning party. But to return to power, the Peronists can't go back to their roots. They need new leadership and new ideas. Here, the party's longstanding ideological flexibility can be a strength. Who knows, as Peronism searches for a winning platform, it could just be the balanced budgets, labor flexibility and economic openness that Macri's government has yet to embrace.