Had You Invested in Amazon's IPO 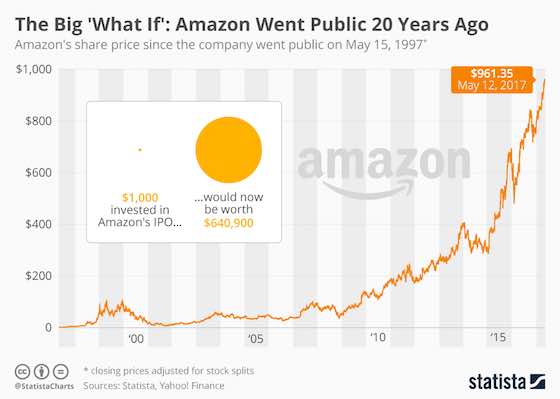 Had You Invested in Amazon's IPO

A look at how Amazon's share price has performed since the company's IPO on May 15, 1997.

Twenty years ago, on May 15, 1997, a Seattle-based online bookstore held its initial public offering.

The company, one of many online businesses to go public during the first dot-com boom, generated $148 million in sales that year and posted a net loss of $30 million. It was valued at $438 million.

Fast forward 20 years and that same company, named Amazon.com by the way, is the fourth largest public company in the United States. Its annual revenue will likely exceed $150 billion this year and whoever saw this coming is now a rich man or woman.

Anyone smart enough to invest $1,000 in Amazon's IPO back in 1997 and hold on to the shares through the dot-com crash and the subprime mortgage crisis is now sitting on $640,000. After three stock splits in the late 1990s, one share bought in the IPO for $18 has turned into 12 shares worth around $960 each.

Investing: "Had You Invested in Amazon's IPO"