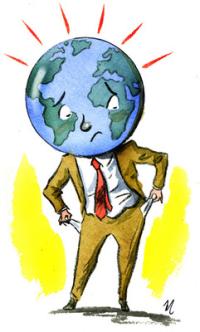 Today's global economic debacle shares a disturbing number of similarities with the early stages of Japan's "lost decade" of the 1990s.

Without good policy and better luck, the world may well fall into a prolonged period of slow GDP growth, high unemployment, and stagnant living standards like that which unfolded in Japan almost 20 years ago.

Structurally, both misfortunes stemmed from excess savings and the deflation of immense asset bubbles.

Japan's troubles began in the mid-1980s, when the ageing of its population kept the national savings rate much higher than was appropriate for so mature an economy. The country's frugality was problematic because savings are by definition foregone consumption, which implies weaker domestic demand and lower GDP growth. Running a big current account surplus -- effectively importing foreign demand -- helped somewhat, but even that could not employ all of the country's productive capacity.

The problem was not immediately evident because of the asset bubble that inflated in the late 1980s, enabling corporate investment to expand and keep the economy growing swiftly. But at the turn of the decade, when the bubble burst, the underlying inadequacy of demand was revealed. Over the next dozen years companies gradually reduced their expenditures to a more reasonable level. The combination of flat consumption and shrinking investment might have driven Japan into a depression, but the government prevented this by expanding its budget deficits massively. This expedient, however, entailed a high cost: by 2003 the national debt would rise by the latter year's GDP.

The same pattern of excess savings, temporarily concealed by a bubble but then aggravated by its collapse, is evident globally today.

The bubble inflated because during the 1990s and 2000s financial institutions in the United States, Europe, and elsewhere steadily increased their borrowing and then used the proceeds to bid up the prices of everything from stocks and bonds to real estate.

The implosion began when, in the wake of the subprime crisis, financiers decided that their firms were overleveraged and began aggressively selling assets in order to pay down their debt. These sales depressed the value of a wide range of securities, damaging other firms' balance sheets and forcing them to join the wave of divestiture.

The process of deleveraging, which appears likely to persist through 2010, would have been devastating enough were it not for its effect on international demand.

Over the last decade or so most of the world has tended to save much of its income, running big current account surpluses.

The United States, the United Kingdom and a few other nations counterbalanced this excess savings by spending more than they earned, effectively borrowing the parsimonious economies' surplus capital and then using it to buy those countries' exports of goods and services.

This was a precarious imbalance, dependent on ever greater US indebtedness, and ultimately unsustainable.

Worldwide deleveraging has eliminated that distortion. The precipitous decline in the prices of stocks, real estate, and other investments has cost the United States some $15 trillion in wealth. Thus impoverished, the household sector has over the last year raised its savings rate several fold--which means that the American current account deficit will shrink from about 6% of GDP in 2006 to less than 2% of that standard this year, depriving the world of its main engine of demand and growth. Thus, international trade is contracting for the first time since 1945 and industrial production, corporate profitability, employment and wages are declining in train.

Almost as alarming as this immediate crisis, however, is the longer-term implication of the demise of the American consumer. Unless compensatory demand arises from some other quarter, the world will inevitably succumb to a protracted period of suboptimal growth. But the loss of global wealth, which Asian Development Bank President Haruhiko Kuroda puts at some $50 trillion, suggests that consumers around the world feel too poor to play the erstwhile American role. Also worrisome is incipient protectionism. The World Bank reports that 17 of the G-20 nations imposed significant new trade barriers after pledging precisely not to do so last November.

Notwithstanding the recent rally in the world's stockmarkets, the official reaction to the global crisis has been inadequate.

The U.S. Federal Reserve has been among the boldest of central banks in lowering interest rates and embarking on quantitative easing, but much more will be necessary. Meanwhile, the details of Washington's bank recapitalization plans keep changing, financial institutions hesitate to accept public money because of Congressional anger and retaliatory legislation, and the bulk of President Obama's stimulus package is earmarked for 2010 or later. Europe is proving even more dilatory, as is Japan.

The problem with this official reticence is that household and corporate behavior around the world is rapidly becoming more conservative.

The longer the delay before the adoption of remedial measures sufficient to buffer the deleveraging process and reinforce confidence, the harder it will be to reverse this trend and revivify global demand.

With its arsenal of modern fiscal and monetary weaponry, today's world should be able to avoid such a disaster.

Nothing done so far, however, inspires much confidence.