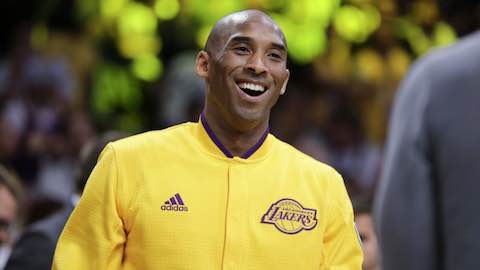 Kobe Bryant put a capper on his illustrious NBA career with a 60-point swan song in his final game against the Utah Jazz on April 13 -- a 101-96 win for Lakerland. Though the Los Angeles Lakers failed to even sniff the playoffs by finishing with a franchise-worst 17-65 record in Kobe's final season, Bryant willed his team to victory and went out a winner.

It was a fitting bookend to a Hall of Fame tenure in the pros for Bryant. If nothing else, his fans and haters will remember him as a volume scorer and a winner. He hit both criteria in his final game, battling back against Father Time for one final, vintage, "Vino" performance.

PointAfter, part of the Graphiq network, looked back at Bryant's elite career and chose 25 numbers-driven facts about the Black Mamba. From one all the way up to a figure north of 600 million, these are just a handful of numbers that represent one of basketball's greatest players of all time.

As an 18-year-old young pup rookie out of Lower Merion High School in Pennsylvania, Bryant became the youngest player in NBA history to win the Slam Dunk Contest. It also marked the only time Bryant ever competed.

Admittedly, the competition back in 1997 wasn't exactly stiff. Bryant beat out fellow competitors Ray Allen, Michael Finley, Darvin Ham, Bob Sura and Chris Carr (who?). No disrespect to Kobe, but his dunks in this competition pale in comparison to today's high flyers like Aaron Gordon and Zach LaVine. 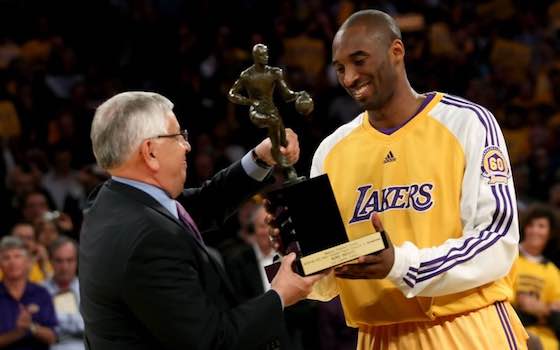 Despite winning five titles during a string of dominance throughout the 2000s, Bryant only garnered one NBA Most Valuable Player award during his career -- in 2008.

Bryant has two children, daughters Natalia and Gianna, with his wife Vanessa.

After his 60-point outing in his final game, Bryant said, "The coolest thing is that my kids got to see me play the way I used to play. I told them, 'I used to play like that quite often. So, YouTube it.'" 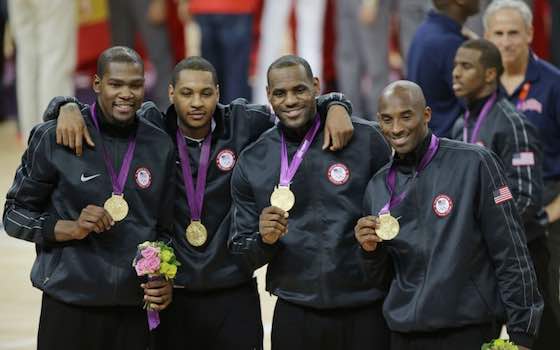 In addition to winning on the highest stage for the Lakers while posting ridiculous box scores, Bryant also succeeded on the international stage via Olympic gold medals.

He won his first Olympic gold in Beijing in 2008, when he averaged 15 points per game (third on the team behind Dwyane Wade and LeBron James) in eight games. Bryant won gold with Team USA again in 2012 in London, averaging 12.1 points in eight games (fourth on the squad behind Kevin Durant, Carmelo Anthony and James).

As a volume scorer who was consistently looking for his offense (and sometimes playing alongside lackluster teammates), it may actually be more head-scratching that Bryant won only two scoring titles compared to his one MVP.

The Black Mamba averaged a whopping 35.4 points throughout the 2005-06 season while playing with noted punching bags Smush Parker and Kwame Brown. The following season, Bryant won his second consecutive scoring title by averaging 31.6 points with a similar supporting cast. 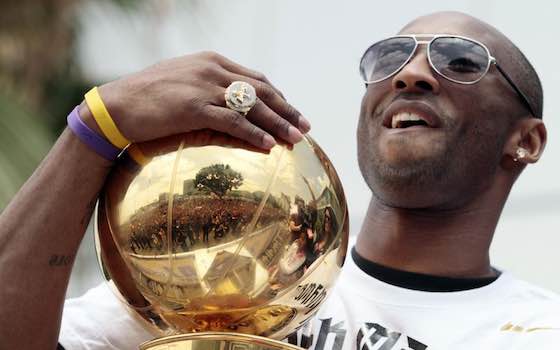 Though Bryant ultimately fell one ring shy of Michael Jordan's six-championship résumé, five titles is nothing to sneeze at.

The younger, No. 8 version of Bryant collected a three-peat of trophies from 2000-2002 while suiting up beside Hall of Fame center Shaquille O'Neal. After some dark days for the franchise after Shaq's departure, Bryant got a new wingman by way of former Grizzlies All-Star Pau Gasol.

Bryant scored 60 points or more six different times throughout his career -- including the unbelievable showing in his final NBA game. Those six outbursts rank Bryant second all-time behind the legendary Wilt Chamberlain (who scored 60 or more in seven different affairs).

We'll have more on these performances a little later on.

En route to winning his second career scoring title by averaging 31.6 points, Bryant scored 50 points or more in 10 games throughout 2006-07. That's an NBA record for the most 50-plus-point games in a single season, a mark that beats out the great Wilt Chamberlain, who recorded 50 points or more nine times in two separate years.

All told, Bryant collected 25 games scoring 50 points or more, which ranks third all-time behind Michael Jordan (31 such games) and Chamberlain (30).

Bryant is a surefire Hall of Famer who boasted an eclectic array of skills on the court, but he was never really known for his three-point shooting abilities. A career 32.9 percent shooter from deep, Bryant was almost always more effective when slashing to the basket or deking opposing defenders to get open looks from mid-range.

Nevertheless, Bryant holds the NBA record with 12 three-pointers in a single game -- a record he shares with Stephen Curry (who did it this year) and Donyell Marshall.

The 1996 NBA Draft was absolutely loaded with talent. Bryant, Allen Iverson and Steve Nash were all selected in 1996, and all three went on to win at least one MVP award. But while "The Answer" was selected by the Philadelphia 76ers No. 1 overall out of Georgetown, Bryant had to wait until pick No. 13 until his name was called.

The Charlotte Hornets pulled the trigger on Bryant, but clearly they weren't convinced about his long-term NBA prospects. The Hornets traded the youngster less than one month later to the Lakers for Vlade Divac in what is still viewed as one of the most lopsided trades in league history. 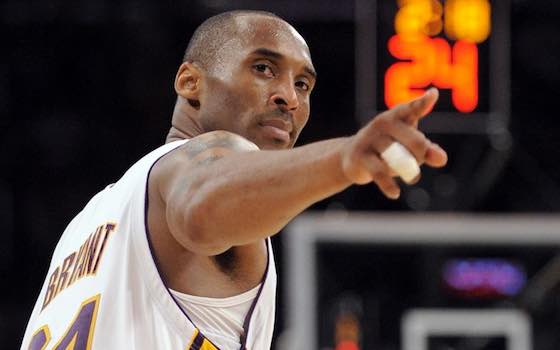 His longevity with the franchise allowed him to rack up a crazy amount of stats in a wide variety of categories, thus crowning him atop a number of lists -- both good and bad.

Throughout his 20 years in the NBA, Bryant was named an All-Star 18 times -- even throughout the final three years of his NBA tenure when he missed 139 of a possible 246 games.

He was named All-Star Game MVP four times (one shared), and was voted in 17 consecutive times after his third professional season. In the 2011 All-Star Game, Bryant scored 37 points and grabbed 14 rebounds (both personal bests).

Even though Bryant's durability was tested time and time again toward the end of his career, he still managed to play in 20 NBA seasons.

His two decades in the NBA tie fellow Lakers legend Kareem Abdul-Jabbar and put Bryant behind only Robert Parish, Kevin Willis and Kevin Garnett, who have each played 21 seasons apiece.

Bryant is the only player ever to spend 20 seasons with one organization.

#15. 40 Points Against Every Opponent

There are a lot of apt stats you can use when summing up Bryant's NBA career, but the fact that he hung at least 40 points on every single opposing team throughout his 20-year career is a tremendous representation of his scoring prowess and killer mentality.

Bryant's 40-point outing against the Detroit Pistons was the lowest output of the bunch.

"Shy" has never been a word used to describe Kobe Bryant on or off the court. That's especially true with regard to his shooting, as Bryant never passed up an opportunity to hoist a potential game-tying or game-winning jumper when the situation called for it (often to his team's detriment).

As such, fans and pundits expected Kobe to go out with a bang -- playing plenty of minutes and gunning for as many points as he could in his final game. He responded by launching an NBA-record 50 field-goal attempts, overtaking Michael Jordan's mark of 49 field-goal attempts posted back in January 1993.

Scoring 60 points or more in any context is an incredibly impressive feat. It's only been done 32 times in NBA history. By doing so in the final game of his career, Bryant became the oldest player by far to do so.

At 37 years and 234 days old, Kobe was a comfortable five-plus years older than Wilt Chamberlain, who was the previous oldest player to accomplish scoring at least 60, at 32 years and 172 days old. "Wilt the Stilt" also holds the No. 3 and 4 spots on the list. Elaborating further, scoring 60 or more at age 30 or older has only been six times. Bryant did so twice.

Perhaps the most iconic moment of Bryant's NBA career, ahead of the championship rings and All-Star performances, is the 81-point masterpiece he turned in against the Toronto Raptors on Jan. 22, 2006.

Bryant played like a man possessed, converting 28-of-46 field goals (60.9 percent), 7-of-13 three-pointers (53.8 percent) and 18-of-20 free throws (90 percent). He also collected six rebounds and three steals. Nobody on Toronto's roster could guard Bryant one-on-one, and it showed in a big way.

Bryant's Lakers made the playoffs in 16 of his 20 seasons on board (he didn't get to play in 2013 due to injury). Over that span, Bryant scored 5,640 points in the postseason atmosphere, which ranks No. 3 all-time.

Only Michael Jordan and Kareem Abdul-Jabbar have scored more playoff points, comparatively. In 2003, 2007, 2008 and 2012, Bryant averaged 30 or more points throughout LA's playoff stint. For his career overall, he averaged 25.6 points in playoff games.

Bryant accomplished a lot of things throughout his career, but combined with the positives are some negatives to balance things out. The lifelong Laker loved to jack up a high volume of shots to get his points. As a result, efficiency wasn't always the primary objective.

Kobe never converted 47 percent of his field goals in a single season -- maxing out at 46.9 percent in 2001-02. Because of his high usage rate and longevity as a go-to scorer, Bryant missed the most field goals of any player in history.

But while Kobe missed a record-breaking amount of attempts, he also scored a massive amount of points. His 33,643 points scored for his career ranks No. 3 all-time behind Kareem Abdul-Jabbar and Karl Malone.

Bryant finished 3,285 points shy of the Mailman and 4,744 points behind KAJ. He did, however, finish ahead of "His Airness" Michael Jordan, but it's worth noting that MJ missed nearly two full seasons of his prime to pursue his baseball career. He then retired after the 1997-98 season and stayed away from the NBA until returning for two seasons starting in 2001-02.

When accounting for both regular season and postseason, Bryant played a total of 57,314 minutes. That equates to more than 955 hours and nearly 40 full days hooping.

Those tidbits are already astounding, but you have to remember that it doesn't account for the countless hours Bryant spent practicing, nor does it include the minutes he played internationally. Perhaps it's no surprise Bryant morphed into a human ice pack late in his career.

Sneakerheads will certainly remember, but casual basketball fans may not recall that Bryant actually started his career with an endorsement from Adidas. It wasn't until 2002 that Bryant paid $8 million to void his contract with the sportswear company, ultimately paving his way to sign with Nike.

That sprouted a fruitful relationship for both parties, bringing about a line of immensely popular sneakers.

According to Forbes, Bryant earned $49.5 million throughout 2015 -- ranking him the 10th-highest-paid athlete for the calendar year. It was a pretty even split in terms of where that money came from, as Bryant raked in $23.5 million from his NBA contract and $26 million from various endorsement deals.

Compare that to Tiger Woods, who earned $50 million in endorsements against just $0.6 million from golf winnings during an injury-ravaged year.

Bryant famously (infamously?) opted not to take pay cuts later in his career, unlike Dirk Nowitzki of the Dallas Mavericks. That decision kept him among the world's highest-paid athletes despite his diminished skill set.

According to Basketball Insiders' Alex Kennedy via Twitter, Bryant earned more than $328 million from his NBA contracts alone during his 20-year career. Of course, that doesn't account for taxes, but you get the idea -- the guy made a ton of cash.

If you expand that to include the whole kit and caboodle, Bryant's career earnings jump exponentially ... which brings us to...

When accounting for Bryant's NBA salary figures as well as his endorsement deals, he'll retire with a record $680 million in career earnings, according to Forbes' Kurt Badenhausen.

As Badenhausen writes, "The only athletes to earn more are in individual sports and include Tiger Woods, Michael Schumacher and Floyd Mayweather."

Throughout a stellar 20-year career, Bryant built a Hall-of-Fame reputation on the court and a lucrative brand off of it. The NBA won't be the same without him.