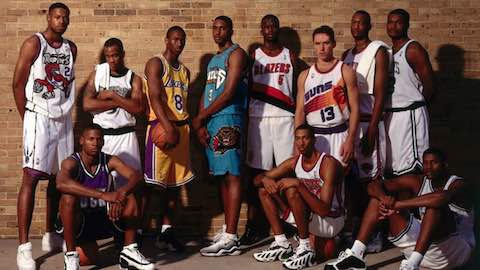 And while that class holds up as arguably the best ever when expanded out to solid second-round picks like Kyle Korver, Mo Williams and Zaza Pachulia, if you delve just a little deeper into draft history, another year stands out for the magnitude of the stars it produced. The year was 1996, when future league legends like Kobe Bryant and Allen Iverson realized their dreams of becoming NBA players.

As is the case with every draft, however, teams didn't exactly get it right. For instance, Bryant -- a future five-time champion and 18-time All-Star -- fell to No. 13 overall before being selected by the Charlotte Hornets.

Following Bryant's retirement, PointAfte, part of the Graphiq network, set out to right the wrongs by re-picking the '96 draft. Based on each player's career win shares (an estimate of the number of wins contributed to a team by a player) and accolades (All-NBA teams, MVPs, championship rings, All-Star berths, etc.), we re-ordered the draft to better reflect the "correct" order in terms of how guys panned out in the pros.

Note: There are 29 first-round draft slots because 29 NBA franchises existed in 1996, rather than today's total of 30.

In the re-draft, former MVP and two-time Finals MVP Kobe Bryant gets selected with the No. 1 overall pick by the Philadelphia 76ers. Though this would negate the Allen Iverson era in Philly, it's a perfect fit in the sense that Bryant was born in Philadelphia and attended high school in Pennsylvania at Lower Merion.

Canadian point guard Steve Nash gets to hoop in Canada via PointAfter's re-draft process. The Toronto Raptors actually made an attempt to acquire Nash back in 2012, and they even grossly overpaid former second-round pick Landry Fields to block Nash's path to the New York Knicks in the process.

Ultimately, the two-time MVP was shipped to the Los Angeles Lakers, where his career crumbled due to injuries.

"The Answer" was often referred to during his NBA career as the best pound-for-pound basketball player ever. Listed at 165 pounds and a (perhaps generous) 6 feet tall, A.I. proved the meaning of the phrase "height doesn't measure heart."

He won the league's Most Valuable Player award in 2001, the same year he dragged a mediocre supporting cast all the way to the NBA Finals.

The NBA's all-time leader in three-point field goals ends up with the franchise where he started his career (Milwaukee). In the re-draft, however, the Bucks take him straight up, rather than selecting Marbury and shipping him to Minnesota in exchange for Allen on draft night.

A deadly sharpshooter, the man otherwise known as "Jesus Shuttlesworth" spent most of his NBA career as an elite scorer before reinventing himself as a complimentary piece on championship teams in Boston and Miami.

As an undrafted free agent out of Virginia Union University, Ben Wallace signed with the Washington Bullets in October 1996. It took a number of years for "Big Ben" to find his niche in the NBA, but that eventually happened when he was traded to the Detroit Pistons.

While in Motown, Wallace made four All-Star teams and won a record four Defensive Player of the Year awards. Known for his elite rim protection and towering afro, Wallace swiftly became a fan favorite in Detroit.

Though Camby didn't win four Defensive Player of the Year awards during his career, the University of Massachusetts Amherst product did establish himself as an elite defender in his own right.

Jermaine O'Neal won the league's Most Improved Player award for the 2001-02 season after blossoming as a go-to interior scorer with the Indiana Pacers. From there, he finished third in MVP voting in 2004 behind other dominant bigs Kevin Garnett and Tim Duncan.

O'Neal experienced an elite basketball peak, but it didn't last very long due to a rash of injuries.

Peja Stojakovic is remembered as one of the league's best three-point shooters of all time. What fans may not recall is just how stellar the Serbian was in his prime.

Early in his career for the Sacramento Kings, Stojakovic made three consecutive All-Star teams. He averaged 24.2 points, 6.3 rebounds and 2.1 assists during the 2003-04 season, finishing fourth in MVP voting (directly behind Jermaine O'Neal) as a result.

Stephon Marbury bounced around quite a bit during his NBA career. After being drafted No. 4 overall by the Milwaukee Bucks, "Starbury" was traded on draft night to the Minnesota Timberwolves. From there, he was traded to the New Jersey Nets, then to the Phoenix Suns, then again to the New York Knicks.

Marbury spent his final NBA season with the Boston Celtics in 2008-09 before moving on to play overseas in China. In the Chinese Basketball Association, Marbury has become an absolute legend. He's won three CBA championships with the Beijing Ducks, and has been named a CBA All-Star six times.

Although Shareef Abdur-Rahim only made one All-Star team during his NBA tenure, his per-game averages are impossible to ignore. He averaged at least 20 points and seven rebounds in five consecutive seasons from age 21 to 25, then missed out on a sixth straight by 0.1 points per contest.

He wasn't nearly as effective after the fact, but he still retired with averages of 18.1 points and 7.5 rebounds.

Antoine Walker's 38.1 career win shares rank 14th among players drafted in 1996. It's his three All-Star berths, rather, that prevent him from dropping any lower in the re-draft.

"Toine" was a very productive player for the Boston Celtics during the late 1990s and early 2000s, averaging 20.6 points over the course of eight seasons while being an occasional threat from beyond the arc.

The Cleveland Cavaliers still wind up with franchise favorite Zydrunas Ilgauskas in the re-draft, but they have to take him eight spots higher than they did originally.

"Big Z" spent 12 of his 13 NBA seasons in Cleveland and made two All-Star teams there after missing the entire 1999-00 season due to reconstructive foot surgery. The procedure, called an osteotomy, involves realigning the bones in the foot to more evenly distribute weight and prevent future fractures. It was unclear at the time if Ilgauskas would ever play again, but he thrived after the injury forced him to miss significant time.

This would be viewed as a massive downgrade for the Charlotte Hornets if they had decided to hang onto Kobe Bryant back in 1996. Instead, they decided to trade him to the Los Angeles Lakers in exchange for Vlade Divac, so they did the damage to themselves.

Fisher, who carved a niche as one of the game's most productive role players while suiting up for the Los Angeles Lakers, won five championship rings in a Lakers jersey.

Kerry Kittles was a decorated college athlete at Villanova, but the extent of his accolades in the NBA end at All-Rookie Second Team.

That doesn't mean Kittles wasn't a solid player at the next level. He averaged 15.2 points on 37.8 percent shooting from long range in his career, and he was a key cog of the Nets teams that made back-to-back NBA Finals appearances in the early 2000s.

With Nash off the board all the way up at No. 2 overall in the re-draft, the Phoenix Suns have to pivot and take Jerome Williams. Nicknamed the "Junkyard Dog" for his uncanny ability to do all the dirty work on the court, Williams cobbled together a successful (though unspectacular) NBA career.

Chucky Atkins is the second player in the re-draft who originally went undrafted back in 1996. He didn't suit up in the NBA until he was already 25 years old, but he played 11 seasons as a reliable point guard -- both in a backup and starting capacity.

As a rookie with the Orlando Magic, Atkins played all 82 regular season games off the bench and notched a career-best assist percentage of 30.9.

Originally drafted No. 7 overall by the Los Angeles Clippers (a franchise not renowned for its abilities to scout big-time talents), Lorenzen Wright didn't move the needle much in the NBA.

He turned in some solid seasons when he moved on to the Memphis Grizzlies, but his numbers tailed off after his 30th birthday.

The Charlotte Hornets originally drafted Malik Rose in the second round, No. 44 overall back in 1996. A year later, they waived him.

Rose then signed as a free agent with the San Antonio Spurs. Under head coach Gregg Popovich, Rose would win two championship rings (in 1999 and 2003) alongside Tim Duncan and Co.

Tony Delk was a true journeyman during his playing days, suiting up for eight different teams during his stint in the NBA before playing overseas in Greece (where he won a Euroleague championship in 2007) and Puerto Rico.

The highlight of Delk's career occurred in a Phoenix Suns jersey, when he scored a career-high 53 points in a loss against the Sacramento Kings. Interestingly, he amassed those 53 points without converting a single three-pointer. He finished the game 20-of-27 from the field and 13-of-15 from the free throw line.

At the time of writing, Delk is one of just 118 players in NBA history to score at least 50 points in a game.

A big man out of Georgetown, Othella Harrington maxed out as an NBA player in 1999-00 with the Vancouver Grizzlies. He averaged 13.1 points and 6.9 rebounds that season while starting all 82 games and converting 50.6 percent of his field goals.

Aside from that, he was merely a solid role player who posted respectable per-36-minute numbers.

Shandon Anderson was selected in the second round, No. 54 overall by the Utah Jazz back in 1996. He finished his career 18th in the draft class with 23.6 win shares.

The former Georgia Bulldog was nothing more than a decent scorer in his career. He retired following the 2005-06 season when he won a championship ring with the Miami Heat.

Adrian Griffin played nine seasons in the NBA after going undrafted in 1996. His three seasons spent with the Dallas Mavericks were easily his best, as he compiled 9.3 of his career 16.3 win shares in a Mavs jersey.

Griffin now serves as an assistant coach for the Orlando Magic.

A 6-foot-10 center, Vitaly Potapenko of the Ukraine played parts of 11 seasons in the NBA. He wasn't particularly adept on either end of the court, but he had staying power due to his sheer size (add 280 pounds of bulk to that 6-foot-10 frame).

The New York Knicks took 6-foot-10 forward Walter McCarty No. 19 overall back in 1996 with one of their three first-round selections. In the re-draft, McCarty slips to No. 25 overall.

Although McCarty wasn't very skilled in any one aspect of the game, he did develop into a sound three-point shooter at age 27. He drained a career-high 39.4 percent of his triples for the Boston Celtics in 2001-02 and retired with a career percentage of 34.6 from beyond the arc.

Yet another undrafted player to make his way into the first round of the 1996 re-draft, Erick Strickland peaked with one great season on the Dallas Mavericks.

Throughout the 1999-00 season, Strickland averaged 12.8 points, 4.8 rebounds, 3.1 assists and 1.5 steals while suiting up as the Mavs' starting shooting guard. He never reached those numbers again.

Outside of Todd Fuller, who was drafted No. 11 overall back in 1996 and fell completely out of the first round of his re-draft, Samaki Walker took the biggest tumble.

Originally a top-10 pick who went to the Mavericks, Walker and his career averages of 5.3 points and 4.7 rebounds slip nearly out of the first round altogether. In 10 NBA seasons, Walker suited up for six different franchises.

Perhaps best remembered for his lofty afro, Moochie Norris played the majority of his NBA career (parts of seven seasons) with the Houston Rockets.

A 7-footer out of UConn, Travis Knight is the only player in the re-draft who retains the same draft position from 1996. With the final selection of the first round, the Chicago Bulls stick with Knight.

Interestingly, Knight never suited up for the Bulls in his NBA career, because Chicago released him less than one month after drafting him in 1996. While playing for the Boston Celtics under head coach Rick Pitino in 1997-98, Knight peaked by averaging 6.5 points, 4.9 rebounds and 1.1 blocks. He was out of the league by age 28.