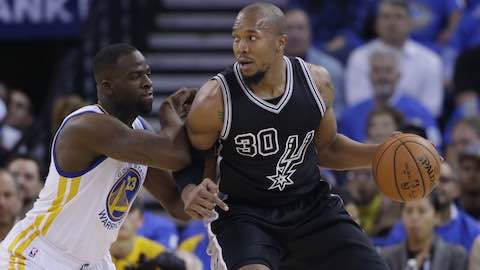 With the NBA salary cap rising at an exponential rate, bargain contracts were difficult to come by in 2016. That said, a handful of teams made savvy signings. Particularly the Golden State Warriors, who landed two veteran big men on dirt-cheap deals.

The PointAfter team broke down the four worst deals of 2016 NBA free agency based on team fit, age and ability. This time we'll look to the opposite side of the coin and peg some of the summer's best bargains.

During an off-season featuring a massive salary cap increase -- making just about every new contract drop jaws without the benefit of context -- bargains were difficult to come by. Some teams did manage to sign players to modest contracts later on in the process, however.

I'll use my PointAfter colleague Will Laws' Free Agent Quotient metric, which measures a free agent's value based on his age, player efficiency rating, win shares, value over replacement player and box plus-minus, to peg the upper echelon of FAs who inked team-friendly deals. The rough guide to FAQ is as follows:

Instead of bringing free-agent big man Bismack Biyombo back to Toronto (Biz signed a hefty four-year, $72 million deal with the Orlando Magic), the Raptors instead reloaded with two new big men on the cheap.

The first addition came by way of the NBA draft. The North opted to select University of Utah center Jakob Poeltl with the No. 9 overall pick acquired from the New York Knicks in the Andrea Bargnani trade. The other big added to the frontcourt was former Ohio State Buckeye Jared Sullinger.

Sullinger graded out very favorably by FAQ as the 10th-best free agent by the metric. His youth (he won't turn 25 until March), win shares (he notched a career-best 4.8 last season) and newfound defensive prowess were the key factors driving up his value. Sullinger recorded a defensive box plus-minus of 2.3 a season ago. That was the best mark of his career and more than double his total from the season prior.

His ability to limit opponents to one offensive possession through improved defensive rebounding was a huge positive for Boston's defense. Throughout a breakout year for the upstart Celtics, Sullinger grabbed 27% of available defensive rebounds when he was on the court -- by far the best percentage of his career.

But as Laws pointed out earlier this off-season, Sullinger was overlooked by the media and, as it turned out, by the majority of NBA teams as well.

There's limited risk here from the Raptors in terms of Sullinger's past back and foot problems, because it's only a one-year trial. In theory, Toronto will get a hyper-motivated player looking to cash a big payday next summer. He can play either power forward or center and provides the Raps with solid frontcourt depth.

Why not take a flyer on a young big man coming off arguably his best season in an NBA jersey?

Landing Kevin Durant, the biggest free-agent prize of 2016, is quite obviously what will draw the most attention in the Bay Area this summer. However, additions of savvy veterans David West and Zaza Pachulia to the frontcourt on dirt-cheap deals is an absolute hijacking for Golden State.

Pachulia was Mark Cuban's Plan B in Dallas last summer after DeAndre Jordan reneged on his agreement to join the Mavericks. And while Pachulia didn't come close to making the All-NBA First Team or All-Defensive First Team as D.J. did, he still cobbled together arguably his best season in the pros.

The 32-year-old hauled in a career-best 9.4 rebounds per game while playing smart basketball on both ends of the court. He finished the season with a career-best 6.0 win shares and garnered plenty of praise from teammate Dirk Nowitzki.

"He is one of the smartest centers I ever played with," the future Hall of Famer said of Pachulia, per NBA.com's Ian Thomsen. "He can pass, he can shoot a little bit, he can put it on the floor. He may be undersized some nights, but he's got a big heart, he fights and he is very, very smart."

Pachulia certainly doesn't possess the shot-blocking prowess of the Dallas-bound Andrew Bogut, but he sets great screens and can rebound. Frankly, that's all this Warriors team needs alongside the likes of Stephen Curry, Klay Thompson, Draymond Green and Durant.

As for West, he'll essentially be taking over Marreese Speights' role as the backup big man. To call that an upgrade would be an understatement.

Speights, though a fan favorite during his time with the Warriors, recorded a -3.9 box plus-minus in 2015-16. That was the 15th-worst mark in the league among guys who played at least 60 games, according to Basketball Reference.

West, on the other hand, posted a box plus-minus of 3.4 in his lone campaign with the San Antonio Spurs. Adding his veteran know-how for less than $2 million in salary next season is an absolute steal.

While the Portland Trail Blazers certainly made a head-scratching move by shelling out $70 million over four years for Evan Turner, they wound up having a defensible off-season by nabbing Festus Ezeli on a modest two-year, $15 million deal.

It seemed as though the Los Angeles Lakers set the market for big men when they inexplicably signed Timofey Mozgov to a four-year, $64 million contract to kick off free agency. But Ezeli, who ranked a whopping 27 spots above Mozgov by FAQ, will make less than Mozzy's yearly salary over the course of two seasons.

Provided Ezeli is also three years younger than Mozgov, and coming off his best year as a pro, Blazers fans have to feel pretty darn good about this pickup.

Of course, it wasn't just in the box score where Ezeli showed improvement. He recorded the best BPM of his career (though it was an unsavory -0.1), the most win shares of his NBA tenure (2.7) as well as his best VORP (0.4).

On top of that, the Warriors were a better team defensively when Ezeli was on the court.

It's unlikely that Festus will start over Mason Plumlee, but he's a more-than-capable backup center. Perhaps Portland will experiment with Meyers Leonard playing more power forward now that Plumlee and Ezeli are solidifying the center position. But whether that will be a good long-term fit for Leonard remains to be seen.

The three-year, $30 million deal Jared Dudley reached with the Phoenix Suns may not look like a bargain on the surface. However, when accounting for the veteran's locker-room presence, history with the franchise and the team's need for leadership among a collection of young prospects, the move makes a ton of sense for general manager Ryan McDonough.

A prototypical "three-and-D" wing player, Dudley made 42% of his three-pointers last season with the Washington Wizards. That ranked No. 8 among all qualified players.

Dudley was particularly adept from the corners, but he certainly wasn't a slouch above the break. As an interesting added tidbit, all 100 of Dudley's threes last season were assisted, making him the only player ever to do that, according to Basketball Reference.

100% of Jared Dudley's 3s were assisted, the only player to make 100+ and have them all be assisted https://t.co/fh4YzwtmJU

The 31-year-old doesn't need the ball in his hands to make an impact. Rather, Dudley relishes spotting up for open looks and knocking them down at an impressive clip. Considering the Suns' starting small forward last season was P.J. Tucker, who only made 33% of his 206 attempts from deep, the reunion with Dudley is a massive upgrade at the position in terms of outside shooting.

With a plethora of guards on the roster who can penetrate to the basket and draw attention from multiple defenders, Dudley should thrive in the desert once again. Loyal fans will no doubt enjoy having the jovial, team-first forward with the NBA's most athletic hands back in the Valley of the Sun.